You are here: Home / Healthy Eating / My gut, she leaks

I wouldn’t have even bothered to do the test if I didn’t think I had digestive problems. I know I do. But some of the information I got from my labs this week was information I didn’t even know could be found.

It’s been 11 months since I went on the GAPS diet, which has helped immensely with IBS symptoms. But I’ve had to stay on a modified version of the introduction diet: whenever I try to introduce too much raw vegetable, I pay for it. And fruit? I stayed off for a long time until peach season was in full bloom. I indulged some, really imagining that local, in-season produce could really be okay. But it wasn’t.

In August I met with a chiropractor and energy worker who helped me dramatically, and when I saw her later in the fall, she confirmed what I’d suspected: that I just had to eliminate all fruit. Me + any kind of sugar = problem.

To compensate for my lack of sweet indulgence of any kind, I sought out more and more fat. I was eating spoonfuls of nut butter after high-protein, filling meals. It seemed both a physical need to load up at meals in the darkening days of late fall and also an emotional need to indulge. For a while these were all soaked nuts, but that got so expensive to buy and time-consuming to make, I started buying regular nut butters, which I think have way too much phytic acid for me.

But compulsive eating wasn’t the only problem: I was also scratching the skin on my knees and elbows until they bled. This happened after several months after my first child was born and lasted until he was two and sleeping through the night; I don’t know if it was all the healing stuff I did that spring, or just the time elapsed, a decrease in nursing, or or an increase in interrupted sleep that made the difference. With my second child, the psoriasis came just a few months after she was born (at home, not a c-section), and now 17 months in and some decrease in nursing overall and night waking in particular, I see no signs of improvement.

Rather than take steroids or other topicals that are just going to push the problem further into my body as I did through my childhood and young adulthood, I’m determined to address the source of the problem. If only we could figure out what that is. 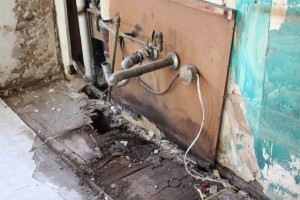 From the kitchen in the house we are renovating. I feel like MY insides must look just as bad.

The doctor recommended an expanded GI panel from DiagnosTechs. The test cost around $250 and would analyze my stool and saliva for parasites, bacteria, food sensitivities and some other stuff I didn’t even know it you could analyze.

The results just came in last week. I am free of any icky critters, my pH is fine, and Candida (yeast) showed up at only trace levels. Good news.

However, there were some bacteria, which we’re going to treat with Goldenseal and garlic, and the test confirmed dairy (casein) and gluten (gliadin) sensitivity through positive SIgA results.

No surprise there. The doctor I saw is generally not an absolutist on food or a believer in intolerances needing to last a lifetime, but she said it was clear I needed to stay gluten-free and dairy-free. The test panel explains:

To have a positive gliadin AB, SIgA reading at the numerical level I showed after more than seven years on a gluten-free diet (and very little prepared food in my diet in the past year) means that I am super sensitive, the doc said.

Also of interest was the fact that I had “abnormally low” Chrymotrypsin levels, which is “suggestive of poor pancreatic output of all enzymes.” Perhaps this explains why I’m so darn sensitive to sugar! For this we are supplementing with an enzyme and hoping it will kick-start my body into remembering how to make it itself (and certainly help me until that happens).

But the most important thing, is, apparently, that I have just about no protective gut lining, or Intestinal Secretory IgA (SIgA). When people talk about a damaged gut “leaking” food into the bloodstream, it’s because there is no protective mucus to stop it. This test calls low <400 mg/100 g dry wt.

So even after a year of gentle eating, my gut is still this damaged. I think if I hadn’t gone on GAPS, I would probably be in the hospital on an IV!

If I understand it correctly, my epithelium is so compromised, my digestive system is letting food particles into my bloodstream, and then my body is lashing out at them as though they are foreign invaders. One of the results is the psoriasis. If you poke around online, you’ll also see a lot about low SIgA being linked to autism and ADHD. The doctor says my gut, pancreas and thyroid woes are all linked.

So what do we do? For one thing, I’m taking L-Glutamine to help heal my gut lining. I’ve taken this before and am not sure why I didn’t pick it back up months ago. The doctor is also ordering me some casein-free colostrom. Gosh, maybe it would even help to drink my own milk. I’m staying on the Green Pastures fermented cod liver oil and fish oil.

There was another Medi-Herb product the doctor wanted to put me on but isn’t since I’m still breastfeeding little A. I worry that at some point, I might need to switch the priority of gut health to hers over mine and wean. My son nursed until age 3, and I didn’t think I do anything shy of two years this time around. But something’s gotta give.

This doctor and other practitioners are not finding (through muscle-testing) that I need probiotics at this time, and since I didn’t have a huge overgrowth of yeast and since I feel like I have had negative reactions when I’ve taken the GAPS-recommended Bio-Kult, I will stay off. I’m eating some fermented foods (not a lot), but I’ve slacked on using lots of animal fats like lard, as I was some months back. Lately, I’ve stuck mostly to coconut oil for cooking and olive oil for extra (uncooked) flavor.

And I haven’t been eating much in the way of organ meats, as GAPS would recommend. It’s enough work to start the day with green juice, get some veggies cooked in broth, make eggs, veggies and some (non-processed) meat and then do it all over again for lunch and dinner, plus prepare meals for the kids and my husband. And did I mention we are renovating a house? And I’m organizing a school fundraiser for a wetlands learning lab?

So what else is supposed to help with gut lining? Less cortisol. Less stress. More relaxation. Riiiight.

My fear of depression scares me away from a life of quiet (or much meditation, or enough yoga over walks), but taking on too much clearly is doing me no favors. If I just weren’t interested in so many things…

The baby is waking up from the nap she miraculously went down for (just over an hour ago) with relative ease (a rarity!), and my son and husband are headed back from the farmers market. Maybe now that it’s past noon on Sunday, a full 24 hours after I started this post, I should just pull the trigger and get it up.

But I’m pretty sure there is a whole lot more to learn.