You are here: Home / Activism & Politics / I have a daughter. That means a GIRL

Baby girl has been a little under the weather, so we’ve been spending more time together — less babysitter, no outings. There were lots of things I intended to accomplish in the past two days, but many of them had to just go out the window. Or, rather, she sat on my desk in front of the window while I sorted files of papers in my overgrown office.

At 17 months, baby A is still not talking much, but she sure does have opinions. And she does nothing half-assed. Every act is intentional, whether it’s putting a random tea bag into a new box, taking my credit card out of my wallet and sliding it under her booster seat, or inspecting the tampons she finds in the non-baby-proofed bathroom cabinet. (When you have nothing toxic lying around, it’s easy to get complacent about latches. And then really easy to get embarrassed when little o.b.s from 1998 end up unwrapped in unexpected and cringingly public places).

This child has a lot more hair in the back than her brother did at this age. It’s coming in straighter but the same color (red!) and in the same location as her brother’s: party in the back. She doesn’t get dressed much in girly clothing, and I was just resigned to her having the same homely mullet her brother had until he was two and a half. It just occurred to me that I could consider actually doing something with that hair. 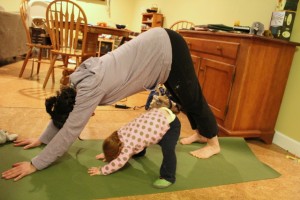 Even though I feel like I model busy more than bodhi, she actually came over to my yoga mat the other day intent on doing down-dogs with me. Looking at her increasingly long red locks, I said to myself, “You have a girl. A daughter.”

Someday she’s going to care how she looks, and she’s going to be embarrassed by my clothes, if she isn’t already. Her brother recently asked why I looked “fancy” when I put on jeans and a 10-year-old ribbed turtleneck that flared out at the bottom “like a ballet shirt,” he remarked. “I’m not fancy, honey, I’m just dressed.” My husband reminded me that he was the one to pick out that sweater back when it was in style, and from Bloomingdale’s no less.

Without my fashionisto boys, where would I be?

By the time the girl is in the mom-sucks years of middle school, I may have taken frumpy to a whole new level. Or maybe I’ll be in my midlife crisis-cum-renaissance, but I find that hard to believe.

At any rate, the cute barrettes my daughter’s brother insisted we buy her months before she was sporting anything like enough hair to stick them in, finally got a trial yesterday. Each attempt to put them in lasted almost long enough for my husband to take these photos.

I think pretty soon we’re going to have a Pippi Longstocking on our hands. 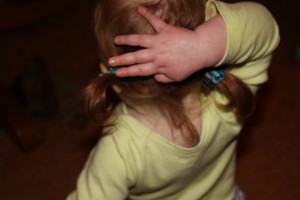 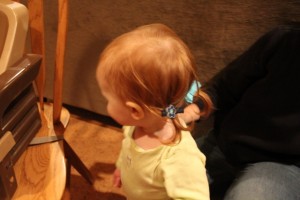 How did you handle hair differently with your daughters versus your sons? Or how did you manage not to?