If you don’t think blood test results from the lab are super exciting, I get it. It’s not like I expected to be distracted the entire afternoon by their bolded “high” numbers. I would have preferred to actually look at my children, to attend to them instead of breaking the rules about no screen time on weekdays, to go about my dinner-making while chatting with them (though if you have to cheat, Mr. Rogers is still the bomb), I wish I had more patience with them toward bedtime but glad I found a little once it was finally upon us. Hugs do good work.

I have an annoyed husband in the other room who had a rough day and would like some attention, but I felt compelled to document this nonsense, to call in my health-minded troops and ask them to help me figure out WTF? What do I do with this info? I can’t imagine cooking more than I do now or doing anything better or more than I do now and yet I don’t know what these might suggest is lurking around the corner.

Maybe these labs don’t say a whole lot, but there’s not some kind of cause for celebration, either. There’s a whole lot of I Don’t Know. Of course I will discuss them with my doctor, probably sooner than the appointment we had already set up. But until then, I really felt seeing if anyone could give me some insight, including asking me what I should ask her.

For some background: I’d been feeling a lot better for a while, probably in part from the methylation support since that started in summer, some from some targeted essential oil use, and certainly some from taking a natural antiviral to combat the reactivated Epstein-Barr virus (EBV) that was discovered in September. For more details on all this and my supplement regime and diet, see this post.

But I still have evidence of inflammation, including psoriasis patches that keep me from loving summer (shorts, chlorine), and that’s even on a very anti-inflammatory diet and with pretty decent sleep and other self-care. No, I’m not meditating every day, but I am doing yoga most days and have gone to a lot more classes in the past two months than I have in years.

Considering how much depression I’ve been through in the past few years, and even in February/March, I had remarkably good spring, weathering Mercury Retrograde and my son waking with a cough most nights for about two weeks during the dry spell in April, before the skies unleashed themselves to the delight of mold spores. (It’s rained a lot here since then). I crumbled for only a few hours when a friend said something that hurt, and for several weeks now, I’ve avoided the very familiar trap of self-doubt despite ample opportunity to dive in. I just now finally activated a post I had drafted in May, and I have to say, there has been a lot of good. Check that out here.

I’ve been looking forward to a blogging conference this weekend. I’ve been working on my novel almost daily in conjunction with my Extreme Novelist class. I’ve been excited to monetize my website (Mindful Healthy Life) and mostly okay that it’s not going as fast as I’d like it to. I’ve been going to yoga class and exercising more days than not.

Today I finally – finally! – took my son in for bloodwork after six springs of allergies and lots of attempted interventions. When I made the appointment last month, I felt ready to take this on, to find out what we were going to find out, to talk to an expert and get data since intuition and bodywork and homeopathy had only gotten us so far. I was happy I felt like I could finally show up for him.

While there, I picked up a copy of the lab results from my appointment 10 days earlier at the same wellness center. At that earlier appointment, my doctor had run some repeat and some additional bloodwork. She liked the homeopathy my chiropractor had me on for metal detox and said she didn’t think adding in extra things like Vitamin C IVs was the way to go. Reducing stress was probably key, she said, and to try to calm down my immune system. We agreed that I would try taking Low-Dose Naltrexone. I started it two nights ago. I have more reading to do myself, but here are some thoughts about the effectiveness of LDN from Chris Kresser and Dr. Mercola.

But when I read through the results today, at first on their own and then comparing to last September, I felt deflated. Every little whine from my daughter rubbed me the wrong way. I wondered how long my good mood could really last. Can I seriously handle this conference where I won’t have a fridge and so can’t really eat my own food? Can I really manage this writing class even though I’ve loved it? Getting into the city for my son’s follow-up appointment and then getting back for the class a few hours later seems daunting. Thus the doubting tapes begin.

If I’m lucky and you’ve skipped my pity party (which I felt so compelled to document, because it’s all part of the journey, right?), here is a glimpse of what I saw when I got my results today, complete with my super awesome high tech graphics because I am so excited about these findings I really want to make them look pretty. Also this was all done with my kids around and being kind of ignored until I got it together just before turning out the light. 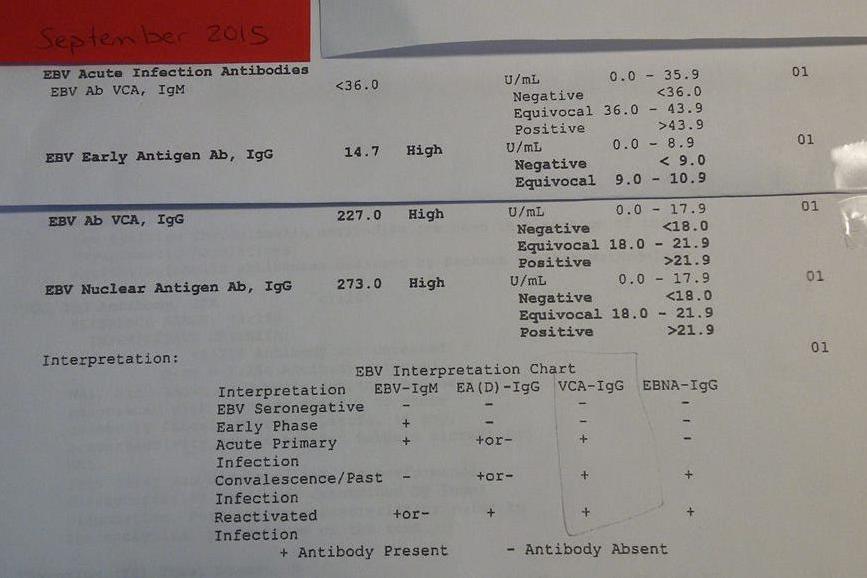 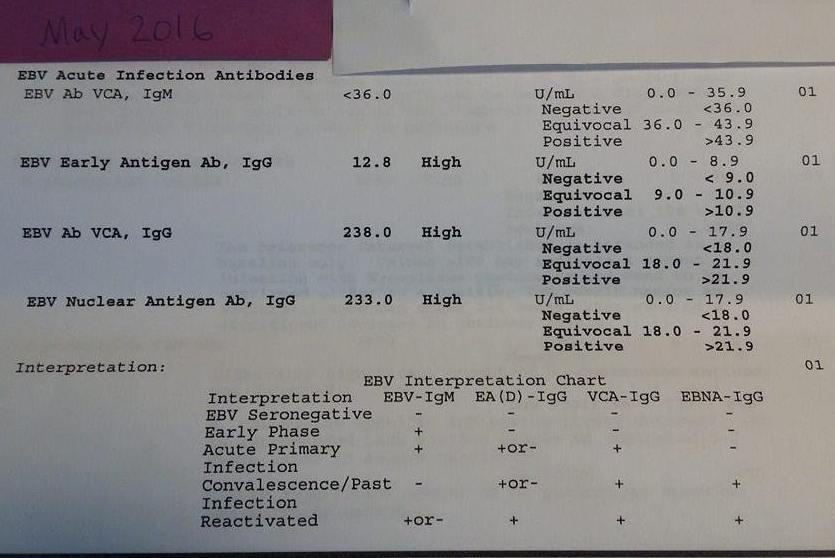 Is there any difference, really? Two numbers went down a little and one went up! WTF? Am I still having an active episode of mono? Will I ever not?

In September I did the IGeneX Western Blot test, with results that the doctor called inconclusive. I know it’s not a perfect test, but it was something to start. One friend who has been through chronic Lyme for years looked at them and said to get to the Jemsek clinic right away. I was feeling better and not wanting to add anything new to the mix of all the new supplements for the methylation support and the EBV. 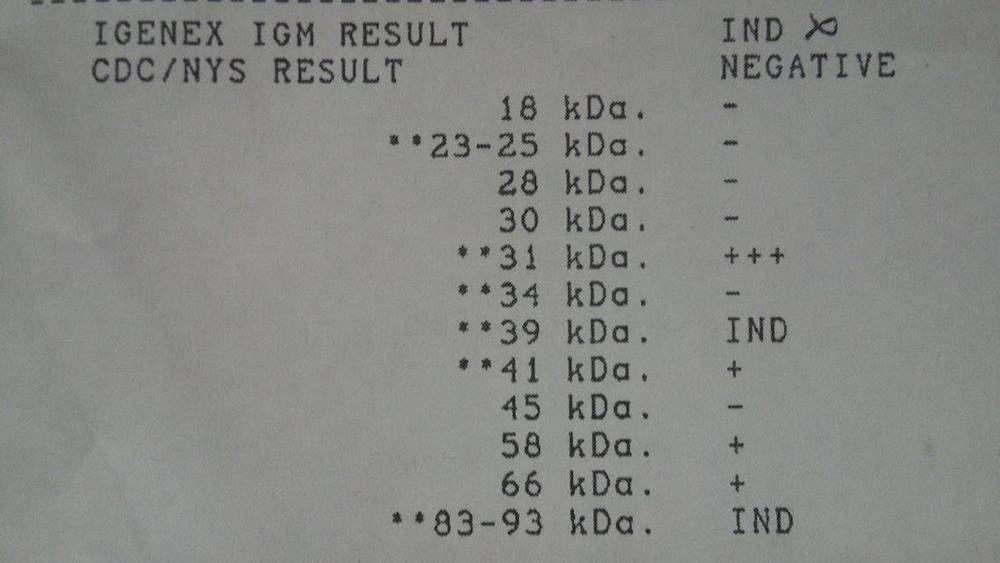 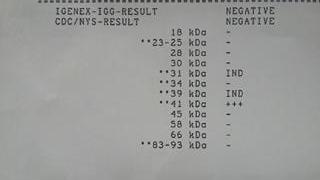 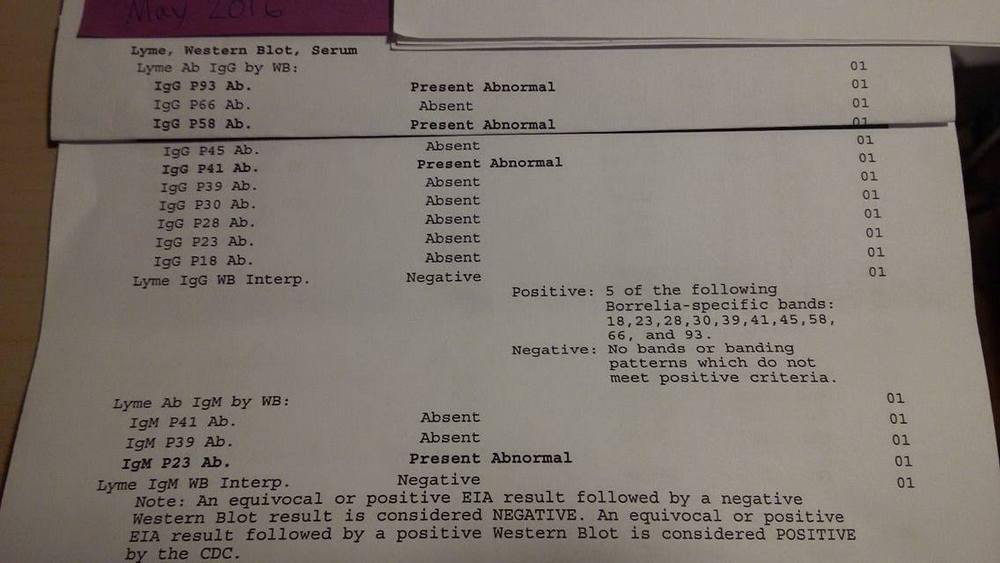 And beyond the possible Lyme, what is the deal with me having Mycoplasma pneumoniae IgG antibodies up past 1100? Positive is anything above 320. Sure, I had a terrible respiratory infection at the end of 2013. But I rode it out and got better. What does it mean that this number is so high, now? 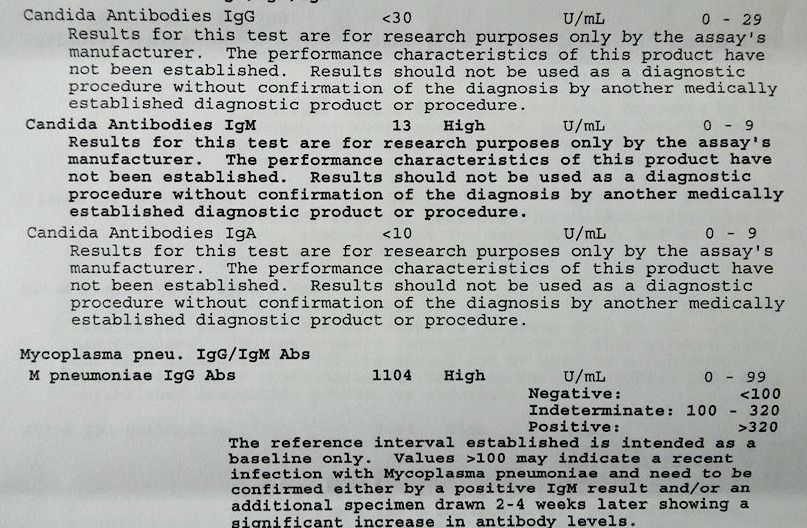 Candida IgM antibodies were still elevated and almost unchanged, 13 down to 12. Have I mentioned that I eat almost nothing with any sugar? I hardly even eat fruit! I eat Japanese sweet potatoes and cassava flour and grapefruit and very occasionally some apple or berries. That’s it. Oh, and in September, after not having had chocolate for a year and a half, I learned about Eating Evolved at the Natural Products Expo East and now eat their delicious coconut butter cups, which have only 3g of sugar per cup (which has 8g of fat!), and it’s coconut sugar paired with only three other organic ingredients and sea salt. They are the best thing ever.

And I guess I really ought to learn more about HHV6, as those IgG numbers were down some but still there (13.9 down to 8.86, with positive being over 0.99)

My TPO Ab number was down from 101 to 69, but I don’t think that’s hugely significant. Other thyroid numbers were fine.

Well, it’s late now and I want to ask some folks to look at this. I’m open to suggestions and comments in any form, but in the comments would be best so they are all in one place. Thanks in advance for any help anyone can offer!

I still haven’t talked to my doctor, but here is what my friend and health coach had to say after reading this post:

“The Lyme is actually better. Very often people don’t test positive for Lyme when they are feeling the worst and only get the positive result after improving immune system (teasing it out)….[A] favorite LLMD explains that if we tested [ill patients] all at beginning many would be negative who will later test positive mid way through (but while also feeling better)…The EBV is still a factor. Viral issues require…more (and the right kind) of methylation support.”

I need to review that after close to a year of supplements targeted to support methylation, as described in my Why I Feel Better post. I am still overwhelmed by this biochemistry and how it works. Here are a few starter links from Dr. Amy Yasko: The Methylation Cycle, an Overview of the Methylation Cycle and How SNPs Interact with Health and more diagrams. (A SNP is a single nucleotide polymorphism: see this definition & a video from 23andMe.)

My friend adds that I might possibly need “some higher dose fat soluble vitamins that deal with virus (like A).” She concludes that I need different support for the virus and more support for methylation and, at the end of the day, it’s “still about host hospitality.” She says the antibody numbers are actually better than my previous ones, but she didn’t address the mycoplasma.