You are here: Home / Featured / Who makes a mother’s day successful?

Am I the only one who doesn’t find the efforts of everyone else’s children on Mother’s Day heartwarming?

Not gonna happen around these parts, I think.

It’s not like I’ve never gotten any appreciation from my children. For the most part they’re good kids.

But celebrations are not something we’ve ever done well. And now that I’ve had my second year of Mother’s Day as a single mom, I’m asking anew:

Who’s supposed to make sure that a mom has a good Mother’s Day?

I got well-meaning text from a friend who kindly told me I was an amazing mom and said she hoped my kids were treating me with the love and care I deserved. A really sweet sentiment, but it’s the kind of thing that can sting if it’s not realized.

If my kids don’t show up for me, is it maybe because I didn’t teach them how? If so, it’s like a double blow – I don’t get the recognition and it’s my own damn fault!

This probably feels triggering in light of the kind of messages that had me hide by birthday on Facebook. Hearing “I hope you’re celebrated!” drew attention to the fact that no one else was doing something for me. It made me feel worse to think I should expect that and to consider my own role in not getting it:

If I really had picked the right partner or developed the right relationships, other people would be feting me!

I did celebrate myself when I turned 40, but then I lost my mojo, and off came my public birthday a few years later. It’s simpler that way.

But you can’t really hide from Mother’s Day.

I don’t want to give the impression that I had the worst one ever. I totally did not, but that’s in large part because I was alone until 5 p.m.!

Before I my husband and I separated, my husband often spent the day at an Ultimate Frisbee tournament, so I was more on duty than most other Sundays. Back then, my wish for Mother’s Day often had been for time to myself, to write or to do yoga or to just not be responsible for everybody else’s everything.

Now I am without my kids a large part of most weekends, so that’s not quite as novel. But it’s still nice. This year – a gorgeous spring day when I took the longest run I’ve taken in 11 years, since before I became pregnant with my second kid – it was, I admit, pretty glorious to get to be by myself. I spent the morning with NPR and the afternoon on the bike trail. I actually took a shower (!) and then watched an online author reading featuring writer friends.

Then it came time to go over to my kids’ dad’s place for dinner. His birthday fell on Mother’s Day this year. It didn’t seem right for me to not see my kids at all on Mother’s Day or for me to take them from him on his birthday, though I did offer that a few weeks ago if he wanted some solo time.

The option he liked best was my suggestion for the kids to make us dinner.

So last week, they looked through some cookbooks and actually had some sibling time that wasn’t fighting, a rarity in this new normal of semi quarantine and no school and no socializing except at a significant distance.

They never completely came up with an entire menu. It was already established that we would have strawberry rhubarb apple pie as we do every year for their dad’s birthday, and they found a recipe for orange sage chicken. That was enough.

I picked up all the ingredients plus some others on my late night Saturday evening run to the grocery store during which I did a video call with them to pick out chocolate for their dad. I had asked him for gift ideas for weeks and was told he had some gifts he gotten himself that could be from the kids, so I thought we were set. However, he didn’t actually leave them to be wrapped and had started already using them, so I, with the kids’ approval, bought every type of cherry chocolate in the aisle.

As for me, last year on Mother’s Day, the kids video called me from World Market with their dad to confer about the things I had told them I had wanted for my March birthday, some of which were still in stock. (The next time I saw a welcome mat I liked, I bought it for my next birthday).

With no one going to non-grocery stores these days, and me not hearing any rumblings about any gifts for me, I ordered myself a few things from REI and took them over when I delivered the groceries on Saturday night so they could be wrapped.

Is that better than having nothing to open? I think so.

I’d tried to model thinking of others by sending a package to their dad’s mom some artwork and school photos. If the kids had actually finished the cards when I asked them to, maybe the packages would have arrived before Sunday. But at least the women got something.

A little before my 3 p.m. virtual literary reading, I got a text from my ex: “They were doing a mother’s day movie and then Kid B had a breakdown.” Sweet.

I got no reply to my offer to come over early with a suggestion that the child be redirected toward the dinner prep that was supposed to be happening imminently anyway, so I arrived at 5:00 as planned to find dad exiting the house with the dog.

“How are things in there?” I asked.

I walked in to hear my nine-year-old sobbing upstairs and see my teenager crying in the family room. They were both mad because, when they were supposed to be working on making cards, their dad spotted the teen watching YouTube – which happens a lot these days – and got so mad he dropped the f-bomb.

He’d had a kind of lame birthday and had lost his composure, just like I had several times during the “school” week when the kids fought or melted down or just got completely off task and failed to focus – on assignments, chores or anything besides their malaise.

So I, who had been solo all day and filled up my happy cup, went into fix-it mode. I tried to gather some intel about perhaps where things had gone awry but gave up to focus on having the kids think forward: to leave their frustrations and disappointments in the past where they belonged and try to craft something of a nice celebration for all of us.

It was actually kind of a treat to cook in their dad’s much larger kitchen. I enjoy cooking with my kids, especially when we haven’t been at each other’s throats – or even just together –  all day. After the tears had subsided, the youngest asked, “So are you just going to order us around?” and I managed to reply about wanting to eat before 8:00 in a way that didn’t make things worse. Score!

I asked the kids what had brought them joy that day. The youngest one said that part of the thing that caused tears – the mother’s day film their dad had suggested they make – was actually fun in parts. The oldest concurred, saying they had a good time coming up with ideas.

Their dad stayed away until everything was in the oven, at which the time the children, get this, actually went outside to play. The youngest has almost never wanted anything to do with sports but was wearing a baseball mitt and throwing and catching balls! And no one got hit in the face! Their dad showed me the exercise equipment he got for himself, and together we cleaned the kitchen we once shared.

Then, after the delicious meal, the youngest threatened to get frustrated about not launching right into pie and gifts. But we were full, there was a mess, and the dog needed to go out. So we cleared the table, and the kids went outside again! Their dad and I walked the dog and talked about a few things (and politely avoided talking about some others). The weather was perfect.

We came back to find the kids still playing, and after one great catch, we all went inside for pie and gifts, the chocolate for him, a hat and a running hydration belt for me. 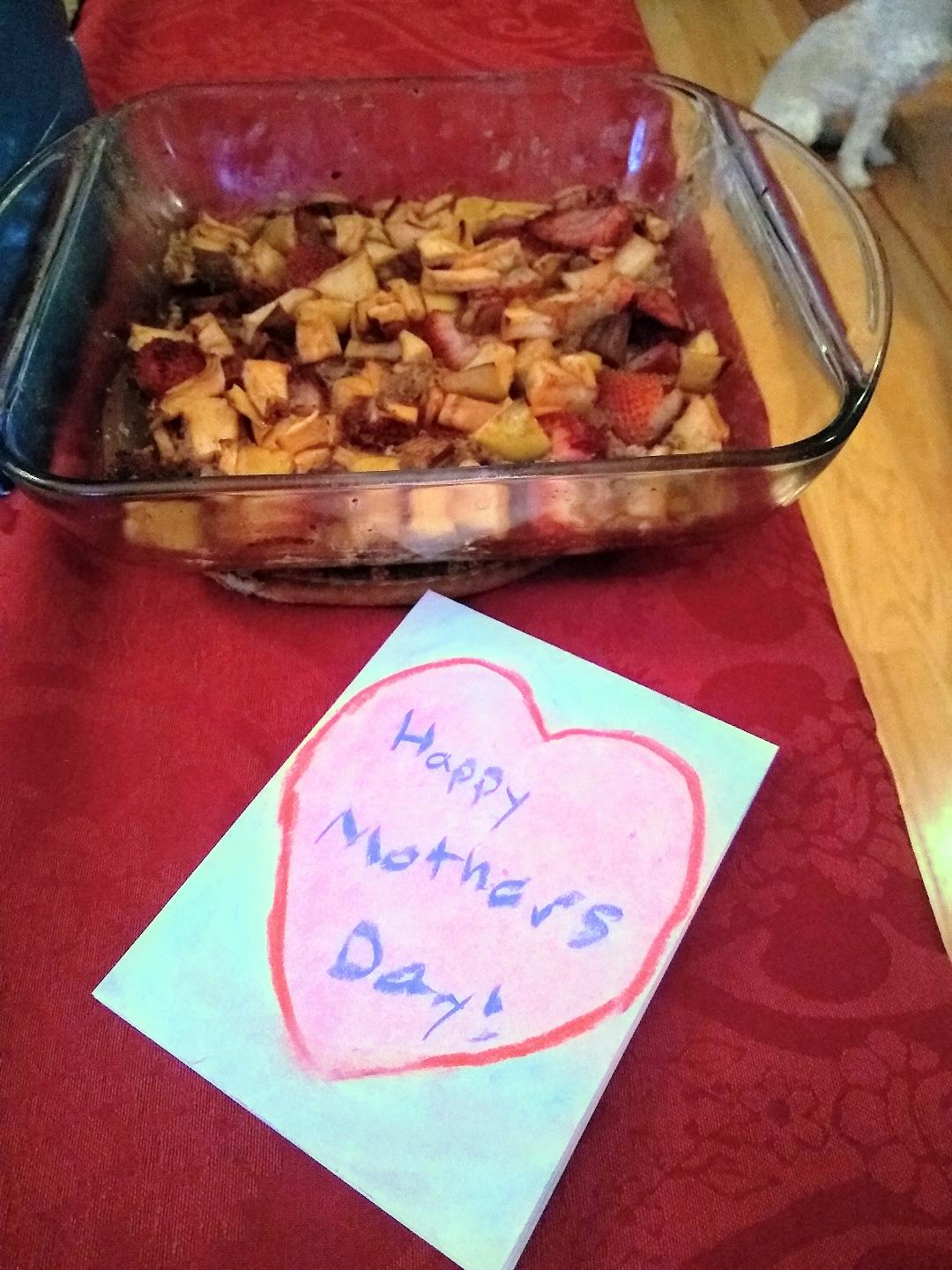 Then the kids showed me the components of a Simpsons intro spoof they had created. The video may never get completed or edited together into one file, but it was a great start. And the process is really what matters, right?

Finally, we sat down as a family of four, something that doesn’t happen very often anymore, and watched the classic Simpsons episode where Marge gets the network executives to stop producing violent cartoons. Itchy and Scratchy learn to love and share. For a while.

I feel mostly good about how the day went down even if the only shareable images were of one card from one of two kids and me in a hat I bought myself. The kids didn’t quite get the pride of orchestrating a meal, but I had time to myself the way I wanted that allowed me to then be with my kids in a way I don’t often get enough. And the kids managed to work and play together. I even had some time with my ex, which pretty much never happens now, which is both kind of fine and also not optimal for our co-parenting.

I doubt I will ever win a Prettiest Mother’s Day bouquet contest or come anywhere close to feeling pampered by anyone other than me. That’s okay.

What matters is that we had some nice moments and we recovered from the ones that weren’t so nice.

I think that would make any day a win.