You are here: Home / The Arts / View from day 47: pandemic papers

Just as some food allergies can cause delayed reactions that are hard to place, so are all the weirdnesses caused by sheltering in place wreaking havoc on my children’s emotions and their abilities to self-regulate.

Take today, for example, when my 9-year-old smashed her iPad down onto the dining table at 10:13 a.m., shattering her breakfast plate.

The day had not appeared to already suck, nor had the week.

In fact, I joked last night as we did our before bed journaling – a habit we began on March 23 – that no one had cried that day!

Yesterday, during a grey afternoon on a day we hadn’t left the house until 4:00 except for me to walk the dog once, we set out on long walk where we got to distantly socialize with a friend. We had a nice dinner, listened to a cool author talk live via a local bookstore, and watched some performances from the younger’s summer camp. We – no joke – cleared our chakras, a strategy the younger learned at Spirit Camp and we’ve only done a handful of times in the years since. (When she’d melted down frequently last weekend and I suggested we pull out the Spirit Camp tools, she said, “Oh, right, I bet so many of mine are closed!”)

Finally, we had a nice wind-down before sleep including a bit of journaling and a short metta meditation.

And this morning, too. I finally slept through without waking until morning, and both kids did, too. When the dog snuggled up to me at 7:40, the time I’d normally be dropping off my 8th grader at school, I snuggled back. No reason to rush.

The younger and I emerged from our rooms at the same time, around 8:20. The older followed shortly after and played with the dog so I didn’t have to while I did my morning yoga sequence.

I made a quick green drink per the recommendations of the older’s physical therapist and got out the fruit for an açai bowl. Let me be clear: Most of these healthy strategies are things I almost never did before the pandemic. The kids always ate a hot breakfast before we got in the car, but rarely with fruits or vegetables, and I often ate while I drove. Journaling never happened. Chakras stayed closed. I did yoga daily but rarely just sat, and no one under age 47 meditated. Things were busy.

I was enjoying the lack of rushing this morning, but I also wanted to be sure the kids got outside in the sunshine and also that they didn’t wait too long to eat breakfast. Low blood sugar is no one’s friend, especially those who share my genes.

The kids wanted to play a quick game of Telestrations, a visual type of “telephone” that we’d bought just before the pandemic was in full swing, when we still thought we might be able to get teens together in person to celebrate my older turning 14 on a Tuesday when there was no school. That would have been March 24, and here we were opening the box for the first time on April 29.

Well, okay. Just a short round. I mean, the dog wasn’t bugging to go out yet, so why should I say no to a game?

Maybe because I’m the mom and should have known there would be consequences to delaying breakfast even further, especially for the younger kid.

But the game was fun. Then we headed outside. I’d said the kids could walk just a bit and then come back to make breakfast while I jogged the dog for an extra 10-15 minutes.

It was a glorious spring morning. The dog didn’t want to keep going without the kids at first, but eventually we got going at a clip. I was surprised to see that when we turned around, the kids were still there. Turns out the teen tried to jump the creek and misjudged how wet the bank was.

So there was that to rinse while also getting breakfast going. 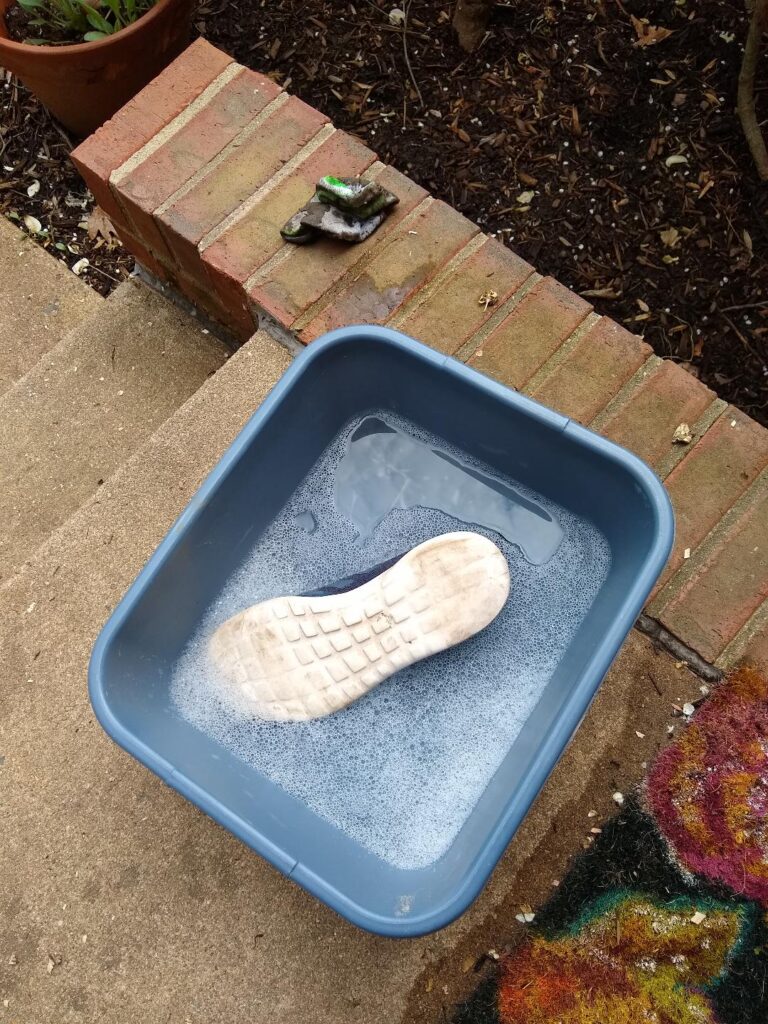 The 4th grader typically loves school and is chomping at the bit to get started, begging me to turn on the wi-fi. The other two of us hadn’t finished eating yet when she started to get frustrated with her school-issued iPad, complaining how many slides were in today’s math assignment.

I waved it away, saying to do something else.

The frustration mounted. Her hands gripped the iPad with anger.

That did not happen. The angry grimaces continued as she pecked furiously at her device. The older child got up and went around the couch.

“Did you just unplug the wi-fi?” I asked.

“She needs to reset,” came the parental answer. Only it wasn’t from a parent. Actions taken by an older sibling against a younger constitute an extreme offense.

Down came the iPad on the plate, which broke into four large pieces. 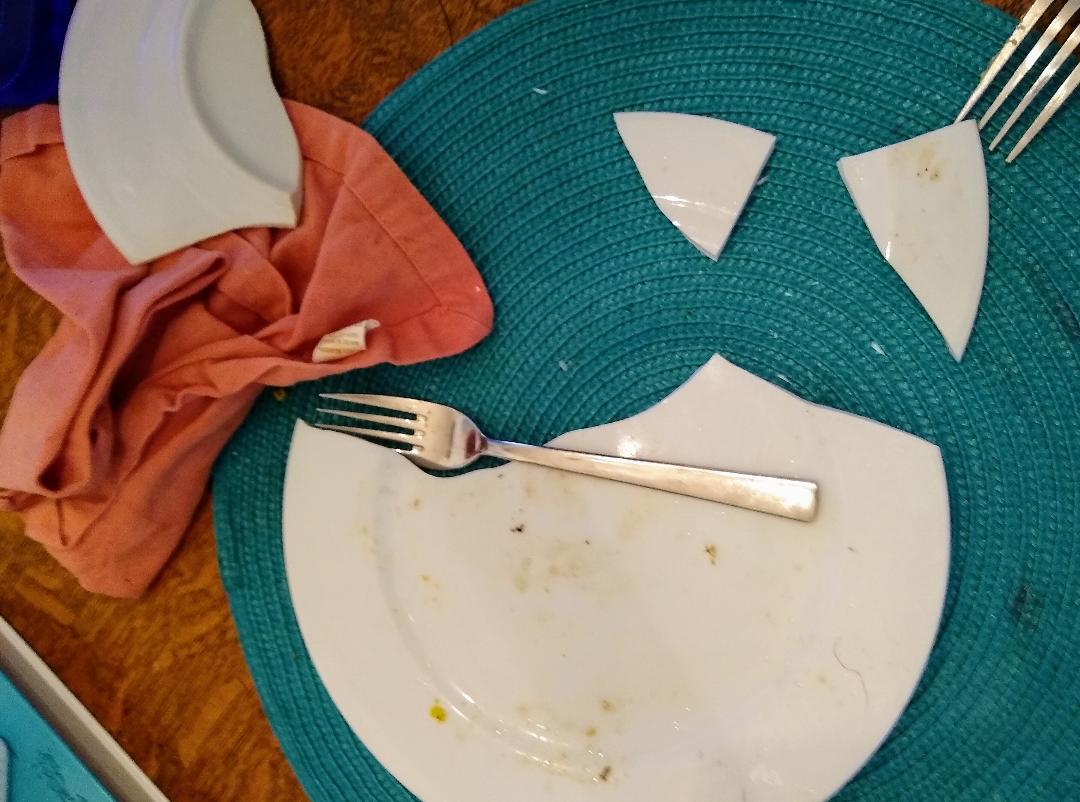 My first reply was to turn to the older kid and say something about this being the consequence of the wi-fi unplugging, which prompted tears. Just then, the angry young child started storming up the stairs, pausing to seethe at me, “I’m not doing schoolwork today. You can’t make me!”

I apologized to the older in a tempered way, explaining that the younger is not ever going to take kindly to be parented by her sibling and that communication would be the best first option before literally pulling the plug on anything.

I left the younger alone while I finished eating my breakfast. When I went upstairs to check on her, where she’d put “leave” placards on the doors but at least this time respected the rule about not locking them, she was braiding her hair. I asked what might help, and she listed off three calm down strategies she’d already tried before asking to be left alone. I complied. I also made no complaint when the older opted to look up sheet music and play the piano for the first time in months rather than do any schoolwork.

By the time I had to get on a consultation call with the older’s new doctor, the younger had come downstairs, agreed she might still be hungry, made herself another egg and got back on her iPad where she proceeded to make a pretty great Pixel art version of me.

She later logged onto school a bit, got out lunch food while I was on the call – including a carrot! – changed back into yesterday’s clothes to re-record something for this week’s church service with the new prospective minister and consented to a bike ride.

The older kid spent 40 minutes talking to the doctor then got on a book club call, one of a very few synchronous options offered by the middle school. (The more-engaged elementary school offers many more intrusions into our week, causing no small amount of jealousy.)

The teen who’s had bad allergies until this week made guacamole and enjoyed sitting outside with me on a truly beautiful afternoon. 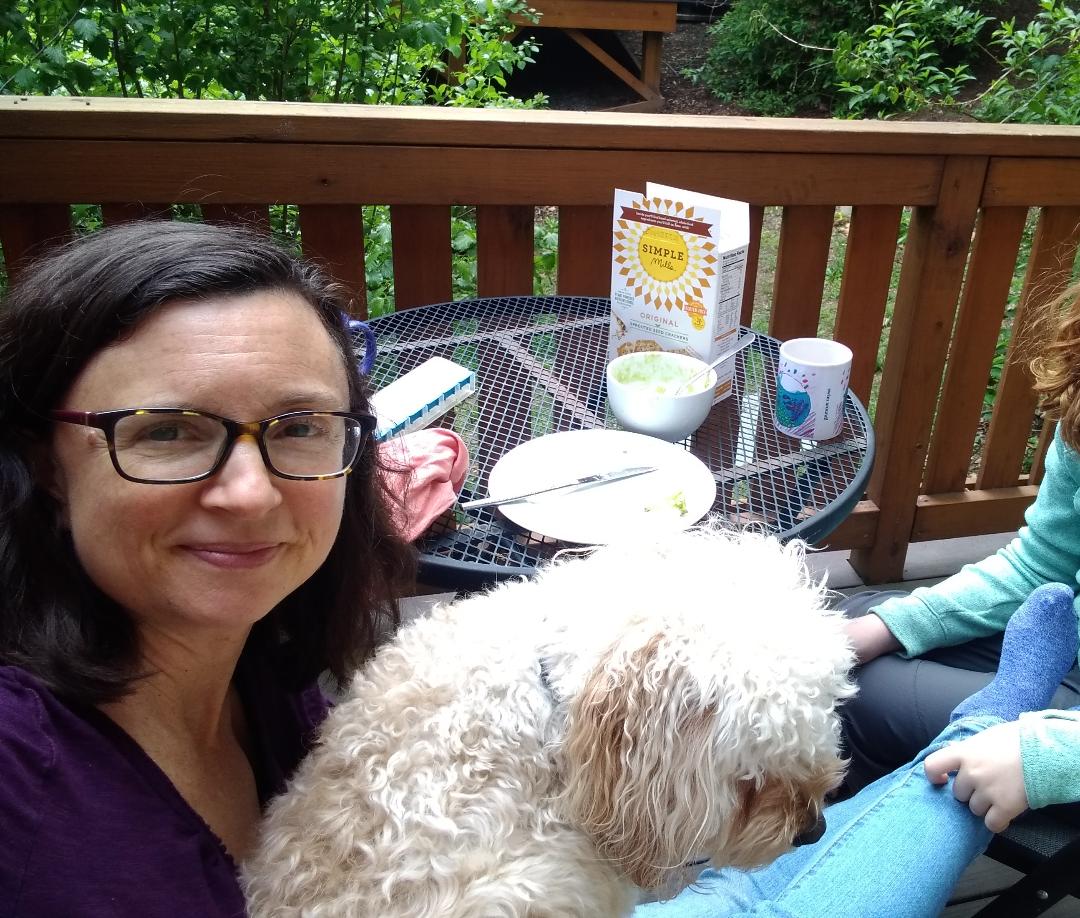 We took a short bike ride before the older kid hopped on a call for tweens to chat with the new prospective church minister then talked – actually talked on the phone – with a neighborhood friend and made plans for a distant bike ride on Friday while I half-ignored the younger sharing funny logic puzzles from school because I was replying to the kids’ dad’s email about spousal support numbers.

Then the younger and I got onto an acting camp Zoom call for a Twelfth Night watch party before I sent the older out to walk the dog and I returned to this finish post-in-progress before starting dinner. The older did vocabulary due imminently, the only schoolwork that I think got done today. Then I got a little help making dinner and – completely forgetting about a virtual poetry reading with a woman who is publishing two of my poems in an upcoming anthology – I joined my kids in watching some Shakespeare, and I listened in on the talkback. 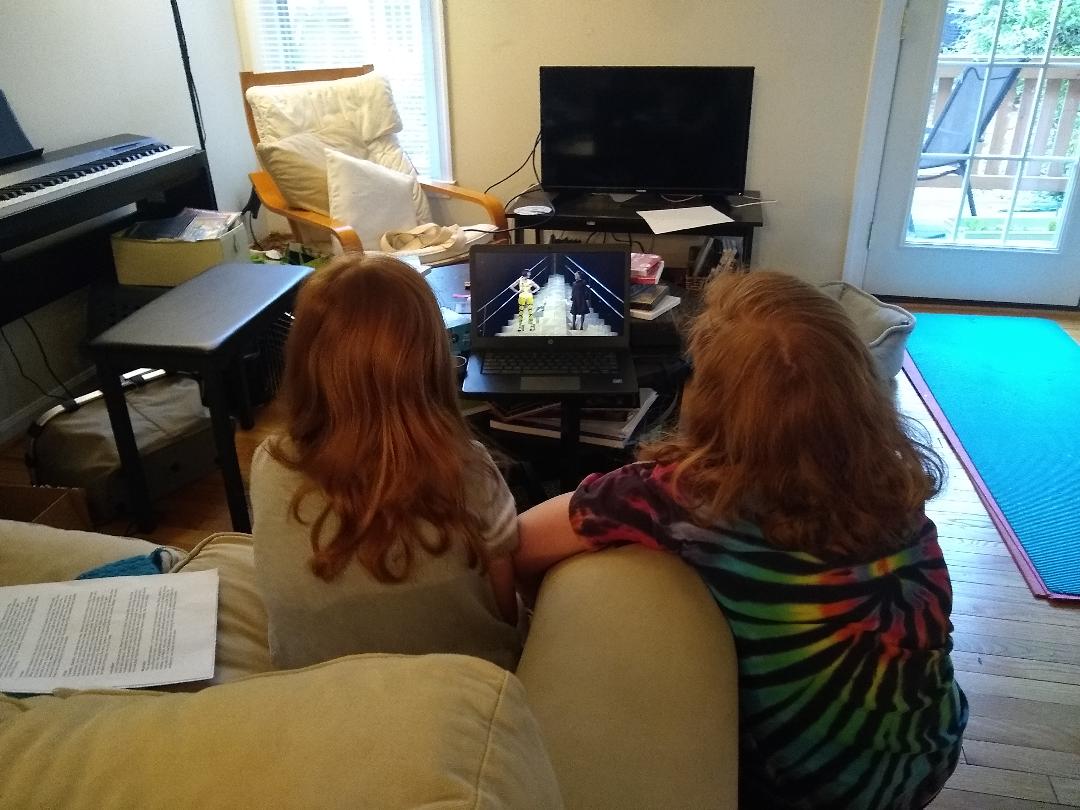 So we had some moments I thoroughly enjoyed in addition to a spectacularly destructive moment early on.

There is no predictability. Each day contains three meals around relatively the same time, but there’s no telling how many meltdowns will occur, and when, and what the recovery will be like.

If I have the presence of mind to respond with calm, oriented to solutions instead of with blame, it usually goes better.

But even then, there’s no guarantee.

Some of my best days are the kids’ worst. Or rather, chunks of the day. Trends are measured in minutes, really. You can’t point to one thing and say That’s why they’re upset. Or This is going to come back to bite me tomorrow. You just don’t know. Maybe the fall-out will happen a week later, or at bedtime, or never.

There are a million disruptions, from missing friends to not getting enough movement (or getting more of different movement) to sleeping later to being present with their mom all day every weekday, even when she needs to disappear to the basement to talk to a divorce lawyer.

My hope is that processing disappointments soon after they happen will lessen their impact. It’s important not to force the issue in the moment but to wait once there’s been a cool-down and approach with curiosity, not blame.

I now understand that my very bright 4th grader is understandably annoyed to be doing lots of redundant math on concepts she’s already mastered rather than learning new material. But that’s what the state has told her teachers to do.

I won’t make her do work just to do work. There’s plenty that’s engaging, and I can find other stuff to extend math, which had been a favorite subject.

And obviously I need to give both of my kids as much TLC as possible to help them weather upsets and bounce back from challenges. This of course requires me to get sleep and exercise and good food and to practice mindfulness on my own, no small feat during quarantine. Fortunately, being separated means I have a little solo time each week when the kids go to their dad’s.

I’ll reach out to my younger’s teachers and try to explain why they might not see homework all the time while also expressing gratitude for all they are doing.

I haven’t decided yet, but I will probably not include the image of the broken plate.