You are here: Home / D.C. Metro / Wheeling away with goodies: Blogger/Brand event loads up mamas 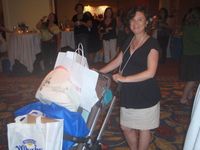 It sure is nice to feel like other people want to make you happy. I was excited for the DC Metro Moms Brand/Blogger event as a motivator to finally get my three blogs merged into one blog (this one! with the domain I’ve been sitting on for a year and a half!), to see other mom bloggers in person, and to learn a thing or two, especially since I’ve never made it to BlogHer and am due to have a baby three days before this year’s conference, sadly when it’s happening here on the East Coast.

But I really didn’t know what to expect. I mean, I figured the Pentagon City Ritz-Carlton would be pretty damn nice, and it was (love the cloth towels in the bathroom). And I knew I’d hear about how to work with brands (something I haven’t gotten into yet) and that I’d come home with some swag.

I had no idea that I’d leave not just with some toys for my son, but a very special “toy” for me (ahem); various coupons and freebies from Organically Grown,  BitMoms, Cultural Care Au Pair, Wolf Trap’s Theatre-in-the-Woods, local woman-owned business Lice Happens (let’s hope I don’t nee that comb anytime soon), Bosch,  Stonyfield Farm, Litl, K12.com and others; and a charger from iGo. I even learned that Georgetown Cupcake is looking into a gluten-free option.

But there was a lot of stuff to carry, and just as my pregnant self was satisfied that I’d connected at least briefly with most (though not all) of the people I wanted to see and, after my third trip to the posh bathroom, I was about to make a somewhat early exit when I was encouraged to stay for the raffle, which I hadn’t even realized was on the agenda.

Lo, and behold, this mama won a stroller. Actually, there were three strollers up for grabs, and I was the first to win and so got to choose. People who seemed to know a lot more about this sort of thing than I pointed to the Quinny Buzz. I gave it a whirl and felt like I’d found the perfect dancing partner. So just like that, we were walking out as a pair, the Quinny and I.

Now, I’m a pretty attachment parenting kind of mom who wore her first child just about non-stop in a Hotsling until he fit in the Ergo. As a baby, he refused to sit in a stroller and was never one to just sit in a carseat after we’d reached a destination. I hardly ever took that thing out of the car. Although it was tiring, I believed that babies should really be held most of the time anyway. So it’s not like I ever really felt the need for a super snazzy stroller, though I did often complain about the cheap one I had.

But this new stroller is like a dream. It turns on a dime. I feel like I’m a smoother walker just by touching it. And it faces both ways, which might have been helpful for my son in those early months. And seriously, it would have been nice to take a walk without the extra weight hanging on my body. That (unwanted) c-section slowed down my mobility considerably. (Returning home 46 hours after the incision was made — because I could not stand the hospital — didn’t exactly set me on track for a speedy recovery.)

I’m a big VBAC advocate who hopes for a different birth outcome this time. And although I still expect to carry my baby a whole lot and sleep next to her until she indicates she’d do better elsewhere, I’m also crossing my fingers that she knows how lucky we got to score this stroller and that she’ll let me float down the street with her in it at least once in a while. I mean, I could sell it and start up a college fund for her instead, but that doesn’t really seem to be in keeping with the spirit of the event. Besides, I have new hope in someday claiming the word “graceful” as part of my self-vocabulary now that I know what these wheels can do.

Thanks to all the sponsors of the event and especially to Quinny for the stroller. And for all the other bloggers who seemed so happy for me to have such a stylin’ way to get all my swag out to my car.

Previous Post: « The buzz around Samantha Bee
Next Post: Can’t find time to write about not finding time »