You are here: Home / D.C. Metro / The buzz around Samantha Bee

When I first heard that Samantha Bee had written a memoir and was coming to a downtown DC Borders, I was both excited to read something by the hilarious Daily Show correspondent and pissed that I had a birthday party in the ‘burbs the same afternoon. As luck would have it, predicted (but unrealized) thunderstorms prompted my friend to push her son’s party for earlier in the day.

This was great, but my getting back to downtown DC in time for the 4:00 reading still hinged on my husband losing at least one of his Ultimate Frisbee tournament games, which were conveniently scheduled to take place at the same park as the birthday party way out in Fairfax County. I hoped he’d play well but not well enough, and we could all leave after the party was over. It was, after all, almost 90 degrees, and he didn’t feel great, our son was overtired, and I am seven months pregnant. How many hours can such pathetic souls really stand the humidity?

He was too close enough to a likely loss for me to ditch him and leave him to find his own ride home. Besides, was I seriously going to try to take a four-year-old to a book reading? Or cross my fingers to get a sitter on 20 minutes notice?

So I started to let go of the idea of seeing — maybe even, gasp! meeting — this woman whose work I’ve long admired (even if it’s been a while since I’ve caught up on The Daily Show on the  DVR, so long that I had no idea she was pregnant again). Then, as we made an unusually quick trip back toward the city after the eventual loss of my husband’s team, he offered, “Do you want me to drop you off or something?”

I could not imagine a time I needed a shower more than that day, having been playing in the creek and hanging outside from 9:30 a.m. to 3:00 p.m. on a disgustingly sticky-hot day. But I had brought some makeup and deodorant just in case (and some lemongrass and lavender lotion my son did not appreciate). So I smoothed my mangy hair into a kind of a pony tail, put on some powder and lipstick without a mirror, hiked up my tank top in a futile attempt to cover the top-of-the-tata shelf that showed my day in the sun, and walked on into the Borders, muddy feet, goofy-mom backpack, and all. 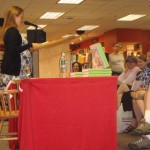 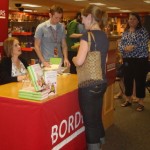 I’ll save more description of the event and book for when I’ve actually read more than 3 pages of it with my own eyes, but suffice it to say I’m so glad I made it. The woman is funny, and it was great to see such a wonderful crowd turning out for her. I only wish I’d been able to claim a seat so that I could have gotten a shot at a book signing, but us floor squatters were called last. I just did not have the energy to stand for another 45 minutes, even in A/C, as much as I fantasized about bumping bellies with her (I’m guessing she’s due before me, but who knows) and asking her how she does what she does with two little ones already.

Instead I walked down to Founding Farmers to join my boys, who were having dinner. It was nice to be home and fed by 6:00 with no dishes to do. I still wish I’d had the chance to meet Samantha Bee, but maybe she will indeed be in town with the show this fall as she mentioned might happen, and maybe with a baby strapped to my chest I won’t look like a total stalker.