You are here: Home / The Arts / How the Indigo Girls broke Facebook but soothed 60,000 hearts

Less than a week into mass social distancing in response to the novel coronavirus, the Indigo Girls spent 90 minutes the evening of March 19 singing and telling stories to viewers in a generous online concert that brought together many of the people who would no longer be able to see the duo in person this touring season. As the concert reached its penultimate number, the group’s signature “Closer to Fine,” the number of viewers climbed to 63K, at which Facebook crashed and some thirty thousand viewers tumbled off the page.

Before that, it was pure bliss. From a humble tan couch, Amy and Emily answered commenters’ questions and sang songs — old, new and covers. All the while, fans’ adoration launched up hearts that bubbled up my phone’s screen like champagne exploding with love.

Comments appeared in rapid succession as viewers shared about times they’d seen the duo in concert, about how happy they were to sing along, and about children seeing their first concert right then.

The online event was a joyous — and, for many, tearfully moving — coming together, a rare moment of connection in a world where everything outside our homes has to happen behind a screen, or six feet away.

The man behind the camera — a musician friend whose name I don’t know because I didn’t write it down and because this momentous concert video immediately disappeared from Facebook — shared some of the comments, summarizing to let Emily and Amy know how many “kitchen dance parties” were happening around the U.S., how happy people were to see old friends watching, and from where across the globe people were tuning in. It was said to likely be the duo’s biggest concert ever, ahead of their opening for the Grateful Dead.

I logged on late, after I’d gotten one kid into a virtual scout meeting. Feeling funny and free, I sang and swayed to “Reunion” clutching my teen, who, after the song ended, retreated upstairs while I continued to do dishes, sweep the floor, sing, and cry. But when it was announced that the final two songs were on deck and would be sing-alongs, I made both kids sit with me at the dining table around my phone (and my frozen laptop screen). Together, we watched the viewer count climb until the crash. One of the first comments came from one of their teachers, who shouted “NOOOOOOO!”

I’d told my kids how cool it was to see comments by people I knew, but it was something else for them to see someone they knew having the same experience from us, a mile away. They learned it’s not just Gen Z and millennial YouTubers who amass giant online crowds but also this duo and their Boomer and Gen X fans — and their children and grandchildren.

The feed came back up in full on my phone where we were saddened to see the dramatic drop in viewer numbers and then heartened to see them tick up. Their teacher commented again, gleeful that to have audio even if her family was singing to a blank screen. Realizing the ephemeral nature of the moment, I grabbed my teen’s phone to take a picture and then went full-on documentarian to videotape myself singing along to “Galileo” with my nine-year-old on my lap. 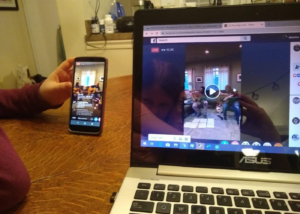 I wanted proof for my kids that their mom found joy in music and in virtual connection during a difficult time. Having lost my own mom three weeks earlier, I entered into this new normal of social distancing on already-shaking footing. When we last saw my mom at Christmas, what we expected would be our final visit, I lay next to her in bed, stroking her arm and singing along to a favorites playlist my brother made for her. I hadn’t recalled my mom ever buying a record; it was startling to think how much I’d underestimated the power she found in music.

The past few weeks were rough, but we thought we’d get together with extended family for a memorial over Easter weekend. Because of COVID-19, the date of the memorial is now postponed indefinitely. Family members have been sharing photos to include in a slideshow that will, eventually, help my children see a fuller picture of their grandmother than they had the chance to know in person. Maybe it will help me too.

This recent loss and the uncertain nature of all of our futures amidst this crisis made me keen during the Indigo Girls concert to have evidence of this moment of joy with my children with photos and video. Even though I may cringe to listen back, I wanted to be sure they would never forget their sitting with their mom while she sang with her full heart, joyful to connect virtually with tens of thousands of others who were all lifted up by the same experience.

Although I cannot tell my children what to expect of the days, weeks and months to come, I want to be sure there is not be any question in their minds about my love for them and about the power that music holds to bring people together, even when they are forced to remain apart.

Rolling Stone announcement ahead of the event

Billboard recap of the event