Although I was totally annoyed at my son for waking me up at 6:11 a.m., I also felt a little guilty that I was going to be dragging him to an appointment later that morning with nothing in it for him. Well, the practitioner was going to check him out, too, and at least she has toys, but this was no outing to the pool or a playdate with a friend.

So I figured I’d at least look into nature centers nearby so maybe we could run around before the 30+-minute (depending on Beltway traffic) trip home to Virginia.

Even though the Montgomery County website made Locust Grove Nature Center sound less than spectacularly compelling, it was 2 miles away and seemed worth a try. I called and was encouraged by the friendly voice, though I now believe she could have bragged a little more.

We were there for over two hours. Most nature centers have much bigger indoor exhibits, but this one had a lot of shaded play area outside and — how smart! — buckets of different kinds of toys to take along before you leave the center. We chose a bucket of sand toys but upon reaching the sandbox had to return inside to pee and, more importantly, to exchange the sifters and shovels for a bucket of trucks and cars. I cannot believe how long my son played with them on his own and then again with me after lunch. It was such a pleasant time in the little exploration zone, especially in the shade on a 90-degree spring (ha!) day. There were some great chimes to ring in the “music and movement” area and tree stump chairs to sit in that little one proclaimed to be “just his size.” (Has someone been reading him Goldilocks?) 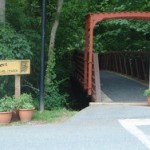 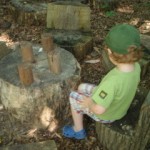 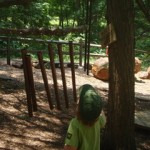 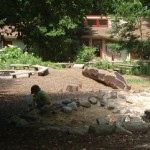 Then there was the small artificial creek, a perfect prelude to the bigger creek a short hike down the hill and through a meadow (or wetland?). It was all quite lovely, and the kid actually fell asleep on the way home for about the third or fourth time in the past year.

And somehow, despite the fact that I slept only from midnight to 4:30 a.m. last night with a little extra once I moved to the cooler first floor (until I was pelted by a Curious George book in the 6:00 hour), I have remained in good spirits. I can’t help but think that getting out where it’s green had something to do with it.