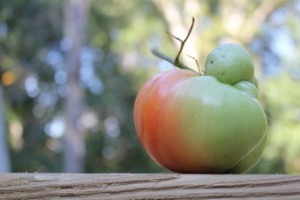 It was a quietly successful day.

What does that mean?

I usually prefer to get up before everyone else so that I can have some quiet moments alone, even if it’s just to start the breakfast (which means start the broth and veggies cooking, and the eggs, and some kind of meat, and get out all the veggies for juicing). If I’m in the right head space, I’ll do some yoga or breathing before I hear any noise on the baby monitor. Things almost always go smoother on those days.

So it’s not my ideal choice to get up at 8:00 and come downstairs to see my son and husband eating non-soaked oatmeal and know that I still have to do everything to feed myself, and I haven’t gotten any solo time or laundry or email checking done yet.

But instead of grumbling about the loss of early morning, I stayed in bed nursing my congested baby and feeling warm and snuggly. I’d slept as soundly as one can when her daughter cries out for a breast and cries again after nursing before switching from near-wail to “hmph” to sleep. But I was still tired, and she was still tired, so I just stayed on my side until her whines turned to amused gurgles accompanied by bats at my nose.

Then I did all that kitchen stuff. Well, LJ made the eggs, but I fed them and everything else to the baby, started laundry and did a short yoga practice while everyone else ate. I got to actually read and digest after my own breakfast when they went out on some errands. The baby came home awake but fell asleep well, so, at 11:40 a.m. I finally took off my flannel pjs from a chilly night to head out into a now-toastier day for a short, gentle jog under cloudless skies. What a thrill to see the sun and feel its rays warm my skin.

Inside, though, sniffles abounded. The baby had woken and the boys didn’t look so great. The younger one wanted to go buy soccer ball. After some sitting on the front stoop and a fresh diaper, off they all went again. This time I had the luxury of putting away laundry while talking to my mom on the phone and making a little more progress in organizing the kitchen while they were gone and after they returned with a girl who didn’t fall asleep in the car.

Even though I’m not at the peak of physical fitness and wasn’t looking for more exercise, I still hadn’t changed clothes, so I put her in the stroller and headed out into the late afternoon sun to see if she’d snooze. She babbled the entire time.

Upon our return, I declared it time to clear out the garden. Our three tomato plants had taken it over in July and we gave up the fight. Until today, when we reclaimed it for some late attempts at seeding lettuce. We all pulled the vines until E wanted to kick his new soccer ball instead and the mosquitoes scared away his dad and sister.

Then the boys went out for tacos, and I had I think what was my first evening alone with my baby girl. She ate, I cleaned. I ate, she ate. I read, she played with her food. And ate some more. 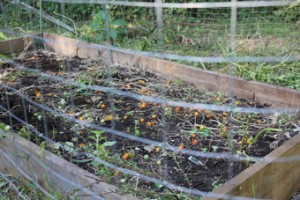 Somehow, though we didn’t get to the beach, or to a pumpkin patch, or out camping or any of the other many things my son is always asking to do, and I didn’t get  hours of work done, he got his soccer ball, the car got an oil change, and our garden got a new start.