You are here: Home / Featured / Reflections on the healing journey: summer into fall

“You’ve come a long way,” said the Total Body Modification practitioner as I listed my areas of improvement along with my concerns. When I started seeing her in the spring, I was struggling, as noted in “Morning with a High-Maintenance Mama.” I’d come out of a bad winter cold and a digestive crisis but was still trying to figure out what I can and can’t eat, and more importantly, it all felt like, well, a struggle.

My blood sugar was nuts, in part from an erratic eating schedule, an erratic sleeping schedule, whacked out adrenals, and just an overall sensitivity to too many things. I felt internally as chaotic and ugly as things looked in my yard, which, nine months after we’d moved in still had the aura of a clay-compacted construction zone with nothing good growing. What a mess! 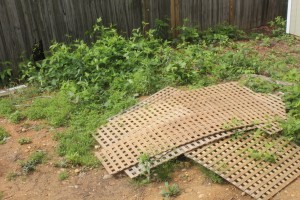 These days we have a garden, and I’m sticking to a schedule. Although in theory I don’t love the idea of my daughter in a full-time public school preschool (even if it is a lovely Montessori program), in practice I know that the consistency of the schedule and the simplicity of having her and her brother at the same school is really what is best for our family.

This way, I can have appointments or deal with ongoing projects/renovations in the house, do volunteer work or finally sit down to work on my new resource website without constantly having to push her off for “just a minute.” Okay, I do still do that, but it’s usually because I’m cooking or doing another house-related project, not because I’m in front of my computer.

This shift is huge, and I owe a big part of it to our gulp-large purchase of a used elliptical. It’s actually an Arc Trainer, which both my husband’s physical therapist and mine think are better in general and will better serve our particular issues.

I had already been doing yoga every morning since early June when we got a deck put on the back of our house, which had previously featured a barred off door and a five-foot drop. Now, I could actually exit my house to embrace the woods, one of the main reasons we’d done this renovation project and move in the first place. 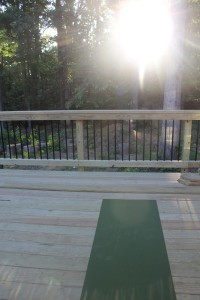 I continued that practice through the summer, including on the deck of at the cottage by Lake Michigan and at my parents’ house south of Flint. 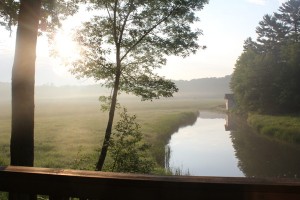 Not only has the physical practice been healing, but what has been such a gift has also been the experience of spending time outside, under the trees, with the real noises of and smells of nature instead of the insulated hum of the interior, the whoosh of the air conditioner, the smell of chicken stock simmering on the stove. 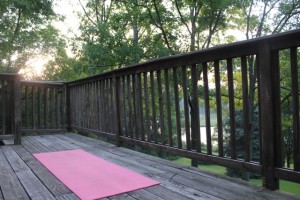 Several months back, my Ayurvedic practitioner had suggested that the daily yoga and some additional exercises before breakfast would get my chi flowing and be helpful for my issues. But if it’s too dark to walk, and it’s not safe to jog, and it seems too far to drive to the gym and back, especially since a child could wake at any moment and who knows if their dad would, too, well, then we needed an option in the house.

She — and others, including Claudia Welch in her book Balance Your Hormones, Balance Your Life  — have also suggested that waking early to attend to these and other rituals can be key in healing from illness and establishing strong health. It’s been clear to me for a while that even if I feel energetic past 10 p.m., I suffer in the long term from staying up late or being too active after dinner.

So I came up with a plan for the school year that would have me up at 5:00 to exercise and do yoga before starting to make breakfast, which around here, is always fresh and hot, never cold cereal. We’re now eight days into the school year, and so far I am loving the new routine. Not only have I read most of the new issue of Brain,Child magazine while sweating in the basement, but I’ve also gotten enough of a handle on the day that I’ve been able to eat breakfast with my kids, which rarely happened when one was off to school and the other either home with me all day or off to daycare in a different direction. I also was waiting until after drop-off to go to the gym, which meant eating way too late on the days I did it and at totally different times on the days I didn’t. My body didn’t know which end was up.

I have benefited from and now weaned off of glandular adrenal support, and I’ve lowered my intake of DHEA. I’m still taking some herbs and some homeopathic remedies as well as digestive enzymes and magnesium. I still have a ways to go, and until my detox foot baths (ionic foot soaks) look less dark and cruddy, I probably have a lot of gunk to get out of my system.

But I am full of hope and purpose and the mildly guarded belief that even if this only means my body is primed for the next healing crisis — the next layer to come off of the onion — that I will get through that, too. 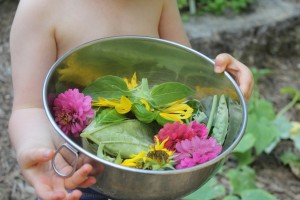 I’m grateful for all the healers and teachers who have contributed wisdom to this journey and hope to help others find their way toward health and vitality by sharing resources.

Previous Post: « Breastfeeding and birth celebrated in book, film, conferences
Next Post: Life purpose manifesto: Why I want to start a business »