Birthing and breastfeeding have been on my mind a lot lately for a woman whose days are normally filled with talk of baseball and potty time. My seven-year-old son weaned four years ago, and my daughter, who just turned three, lost her access to my breasts at 22 months when my health was just struggling too hard to keep up with even one of us to maintain. But when in Rome…

Although most of me is excited that my daughter is going to preschool this fall, the publication of two of my essays in an anthology on breastfeeding and other events for World Breastfeeding Week along with all the great resources I encountered at MommyCon Philly have made me pine for days of yore, the newborn days of so much closeness.

First, the anthology: Have Milk, Will Travel: Adventures in Breastfeeding. This is simply a great collection, if I do say so 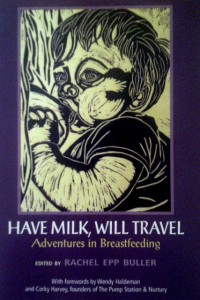 myself! It was late 2010 when my friend, birth painter Jessica Clements, forwarded me a call for papers for “comic nursing stories.” Two years later, I heard from the editor, artist and Reconciling Art and Motherhood editor Rachel Epp Buller, that she’d found a publisher in Demeter Press, the first book publisher focused specifically on the topic of motherhood and mothering.

This spring, I got to read early page proofs of the anthology which is just now hot off the presses with book launch events at The Pump Station and Nurtury in Los Angeles tonight and this weekend. My copies should arrive any day!

It’s exciting to be part of a collection that I think will help so many, especially new moms and the people who love them. Every essay is a hoot, even if it’s also a little heart-breaking; there’s always a feeling of looking up and forward. And laughing. Reading these essays and learning more about places like the Pump Station and other breastfeeding-related businesses really made me wish my body could sustain another life again.

Also this spring, I had the chance to watch the gorgeous and insightful new documentary, Birth Story: Ina May Gaskin and the Farm Midwives. Like Jeannette Catsoulis wrote in the New York Times, this film really does make you want to  jump in a tub of warm water and start pushing. I had the honor of interviewing director Sara Lamm, who was graciously candid about how she combines film-making and mothering. I’ll post a link to that piece as soon as it’s up.

And then I went to the lively and packed Breastival at the Breastfeeding Center for Greater Washington on August 5. My, how that place has expanded since 2006 when I spent nearly every Tuesday morning of my son’s first four months at its free breastfeeding class! It warms my heart to know that DC’s wonderful brick and mortar resource for all things lactation now has ample space to do this important work.

The event was overflowing with moms, babies and raffle prizes. The store also carries lots of cloth diapers and other natural parenting supplies in addition to pumps, nursing pillows, baby carriers, lactation snacks, and much more. 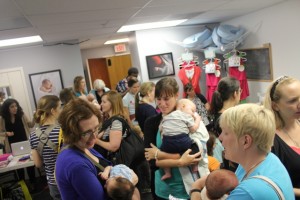 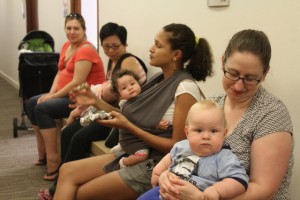 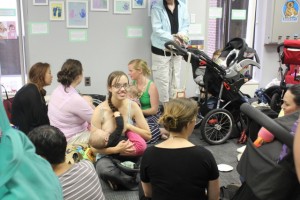 Several new mamas I spoke to cited the Center as the reason they’d stuck with nursing, and I knew that the expectant first-time mom I chatted with would have a much better chance with such a support network built in even before she meets her baby. (Of, course, since she lived in Arlington, I also gave her a copy of the upcoming Arlington/Alexandria Holistic Moms chapter events so she can find a supportive community on this side of the Potomac, too.)

The previous week, I went to a smaller event on my daughter’s third birthday: a private version of The Big Latch-On, which also had public events around the country on August 2 and 3: groups of women latched on for a minute at 10:30 a.m. The gathering I attended was organized by my old La Leche League chapter. It was a real blast from the past to go into the same church, not to mention a mind trip to see my children now dwarf the toys my son played with so many Tuesday mornings into his toddlerhood. I remember demonstrating side-lying nursing with him long after we’d stopped needed to do it so much. I recall bringing him (then four years old and weaned) to play during the only meeting I made it to with my second child, when she was just a few weeks old before we got into the busy-ness of ferrying big brother back and forth to preschool. 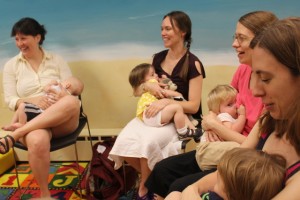 The day after the Latch On, my friend and neighbor K and I took our newly-turned three-year-olds to a potluck social in honor of Marilee Pinkleton, the midwife who welcomed both of our HBAC babies into the world almost exactly three years earlier – one mile and twelve hours apart. One of the organizers was a mom I knew from the International Cesarean Awareness Network (ICAN) who’d had her second baby just weeks before us and who now has a third, also born at home.

If I thought that those events were plenty to stir the isn’t-it-great-to-birth-and-breastfeed pot, I had another thing coming when I got to MommyCon Philly. In its first year with a traveling conference reaching six cities, MommyCon looked like one big Attachment Parenting International (API) meeting. Everywhere you looked were parents wearing carriers and little mouths attached to breasts. I was one of the few attending without children. Although it was an absolute dream to have six hours alone on the Megabus and to have only myself to look after, I felt a little out of place without a little hand to hold or someone on my back. (Don’t worry; I made up for it later!)

I met the two mothers behind Nuroo, the ingenious new shirt that lets mothers have skin-to-skin contact with their babies. 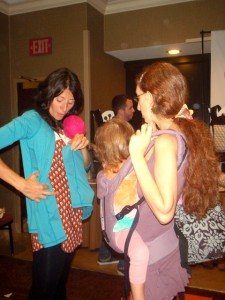 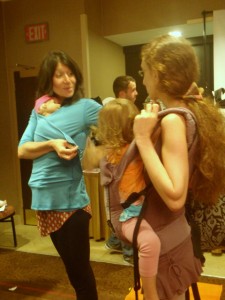 I also saw more carriers — and prettier carriers! — than I ever could have imagined when I started out seven years ago (even if I did I own a Hotsling, Mei Tai, Ergo and handed-down Maya wrap). I oohed and ahed at the beautiful photos of the Fourth Trimester Project that celebrates women’s real postpartum bodies. And I got to hear inspiring words from presenters January Harshe (mother of five) of Birth Without Fear and Jessica Martin-Weber (mother of six) of The Leaky Boob. 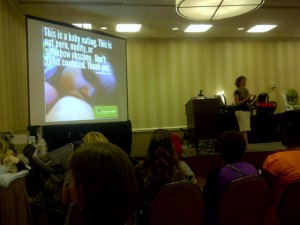 Although I’ve known that birth and breastfeeding tired me out and permanently altered my body structure (in part due to my c-section but also my HBAC), and I’ve known I ought not even consider ever having another child unless I felt solid in my skin and in my mind, the speakers at MommyCon provided a great reminder of what an amazing power it is that our bodies can create, birth and sustain life.

This weekend offers a sneak peek of the new breastfeeding film from the folks at The Business of Being Born. Showing here in DC on October 27, Breastmilk The Movie should be a great addition to the conversation.

When I weaned my daughter at 22 months, she was ready, and I was beyond ready; my body needed to move into a healing mode and address adrenal fatigue and a whole host of issues head-on. But I do miss knowing I had the power of nurturing and healing my child in such a profound way.

I’m grateful that I got to have the amazing experience of birthing a baby naturally, but knowing what I missed the first time (because I had a c-section) only increases my wish that I could have done it again. (Well, that and the fact that it happened so fast and I’d spent too much time worrying and not enough time enjoying the amazing ride that is pregnancy!)

Seeing so many mothers who have built such important resources while also raising children has inspired me to get serious about my own aspirations. Even before I started the Arlington/Alexandria chapter of Holistic Moms Network — and certainly a whole lot since! — people have been asking me for advice on practitioners to see, classes to take, nutritional approaches to try. I sometimes manage to write good email replies or give good phone advice, and when I do, people seem grateful. But it’s been a hobby that falls to the wayside, and I am ready to make it more.

What I’ve wanted is to be able to point people to a place where they could find everything they might need to get started living holistically, get acquainted with this area if they are new, or to face the latest unfamiliar health challenge even if they are already in the natural family world. There are email lists, and there is, of course, Holistic Moms, but I’ve thought about a local site for a long time. A really long time. Seriously, I just searched for and found the email reply Sarah Masterson, formerly of DC Baby, wrote me in September 2008 to encourage me to go for it!

So now, five years later with two children in school, I’ll be working on the birth of another type of baby: a resource site for natural family living in and around DC. DC Healthy Green Families is barely an embryo at this point, but I’m committed to making it a reality. So, along with working on the novel that is screaming at me to write it, building that new website is where my energies will go this fall. I’m in the market for logo design and branding, web development, and accounting help, preferably from other natural-minded mamas who understand what I’m going for and who might be looking for portfolio-building experience. 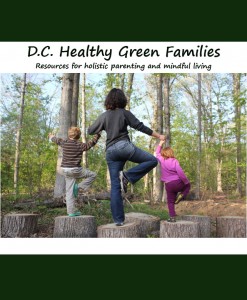 Thank you to everyone who has inspired me! I hope to help others find their way to happy and healthy family living.