You are here: Home / Uncategorized / On being recently separated

It’s been two and a half months since my husband and I separated and I moved into a nearby townhouse. After my initial sharing and the kind replies of support I received, I’ve since had a handful of “how are you doing?” questions. A few – most of the ones in person – have been in front of the kids, which wasn’t ideal. The rest were via email or text.

The truth is that I could be a lot worse. There was no abuse, no rancor, no drama.

And yes, I felt all those things before. But they have different shapes now.

The depression that sometimes felt foreboding and capable of swallowing me whole more resembles resignation. For now. There have been times when its mouth opens wide and dark but there’s a larger percentage of the time when it just seems to be one long sigh.

Loneliness used to have a bitter, acrid taste. Now it’s both more specific and general. It has notes that taste like my children and a bouquet that smells like the rest of the world.

Now that I’m in a smaller space, all the overwhelm is confined to three floors that are fifteen feet wide. It was really mostly in my head and on my computer and in my planner, and it still is. But at least that space feels more contained and less shared. (More on that below).

The overwhelm is bigger, yawning into the infinite future of double mortgages/rents and (nearly) twice as much furniture and two sets of some things. It’s a pit of money, a deep ditch of worry where the guilt pours down so fast it tears away all life along the steep walls, all that which was beautiful eroded into a pile the length of the thing, rotting until midday sun can reach it. Maybe new things will grow from the sludge.

Guilt is a shifting thing. It sat so heavily before, in anticipation of something. Now that the new reality is upon us, it’s more of a trickle, something that’s always in the background making everything slick and slightly dangerous but only getting you wet when the seeping crescendoes to a gush, like when a child speaks of sadness or lobs a blame ball.

The sense of being conflicted is different now that different days have different realities and expectations.

It is less painful to miss something that would bring me joy or that I feel I should attend on a weeknight if I know I’ll get to choose something on a weekend I might not have before, like the two readings at Politics & Prose I attended in the space of one month!

Also, I enjoy cooking for my family more when there have been meals I haven’t been responsible for!

I can handle the frenzy of the school week knowing that there will be a little more space on the weekend.

Not always tons of space, though. I’ve been involved in many weekend activities and events and errands and I-forgots plus times when there simply needed to be an adult body in a space with the kids – or with one kid while the other had to be somewhere else. But it makes a difference to have three days that start with only me.

To that end, I wanted to document from these first few months the high points, the things I’m glad for when I’m not otherwise stewing about the abject failure that is my life! 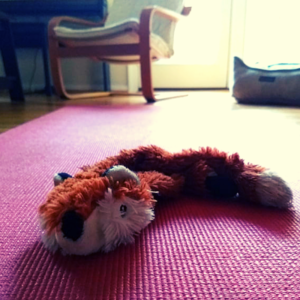 1. Doing yoga without the dog

The puppy we got nearly a year ago has been a good thing for us all. I spent much more time walking in nature, which is healing and nourishing. She loves me best of all by far, which is kind of nice. She likes to be petted like a cat, which is soothing, and watching her run with abandon at the dog park fills me with glee every time.

But she’s also seriously annoying. Since we got her, she’s acted like she owns my yoga mat. She sits on it the moment it gets rolled out, and if I want to get in my morning practice, I have to continuously throw one of her flattened stuffed animals, first needing to ball them up to get them past a few feet so I might make it through one and half poses before she returns, expecting me to do it again. So I enjoy the three mornings she doesn’t sleep and thus wake with me!

I love weekend radio. In fact, some of the times I’ve gone to a hotel to write on a weekend I’ve found myself lingering over making breakfast to stretch out my listening before I start writing. So it’s kind of a dream to be able to listen almost all day on the Saturdays and Sundays I haven’t spent a giant chunk with the kids or driving around to buy furniture, though usually I listen to it then, too, unless I’m super reliant on GPS.

This can border on overkill, though. One weekend I caught Wait, Wait, Don’t Tell Me all three times it was broadcast by WAMU and several times I’ve turned off the second hour of ATC or Weekend Edition when I came to the part where I walked in the first time. But overall, me likey. Live From Here is my standing Saturday date.

3. Breathing my own air

I am so sensitive to the compounds in coffee, I get revved up just smelling it. Not in a good way. In a jittery, increased anxiety way.

I haven’t consumed even a decaf coffee more than five times in the past five years, even though I really do enjoy the flavor.

One day a week I meet with other writers at a coffeeshop, and I’m buzzing for hours after that, just from the contact high (not from my peppermint tea). But I can handle it because the time spent being in a creative community feels so good.

At home though, I couldn’t air the place out enough after coffee was made in the morning. It’s a perfectly reasonable thing for people to make coffee in their own home. But I prefer it not happen in the space where I live; I really do not need anything to ratchet up my stress response any higher than it already is!

A recent New Yorker article talked about indoor air and how regular cooking shifts the chemical makeup of the air. Reading that helped me feel less crazy for being so challenged by the coffee (and toast!) I used to be so sensitive my face would turn red whenever I used the oven. I’m better now, but I really like being the only one in charge of the smells I create and the way I get rid of them.

4. Not looking over my shoulder

Although I will probably always have enough self-criticism to go around, at least now I’m not anticipating criticism from another adult on a daily basis. It’s true that my 13-year-old has recently made some comments that may be harbingers of more criticisms to come, but they are of a kind that is par for the adolescent course, not of the housekeeping variety.

Well, except for the fact that we should get cable and a TV and all the other things we don’t have in my place.

Disappointing my entitled kids is different than worrying about making someone feel you don’t respect them, or feeling disrespected.

Being in charge of what my space looks like, without apology (except for the lack of technology etc.), is definitely a positive.

Three of the four above were characterized by lack. But the NPR and the additional time doing stuff with my kids are big pluses.

The first few nights the kids slept here, we played with the previously unused Yoga Pretzels deck. Since then, we’ve enjoyed several rounds of Battleship and during spring break learned a lot from the Trivial Pursuit Family Edition I picked up at Goodwill. On a snow day, we did puzzles before we walked up to the other house to sled; those hours of quiet hanging out and hanging things on my walls was great.

More recently, the day after my older child and I put together a Kallax bookcase (that I didn’t want but that I finally decided would look perfectly good in the basement), the kids saw the room come together. They agreed they would like a low round coffee table to put in front of the two chairs I bought of Facebook Marketplace. I quickly found one on the same platform, only $10 and only a mile away. Within minutes of us bringing it inside, a new puzzle was started. The kids take breaks from puzzling to make forts with or otherwise play on the flip chair I bought from another Marketplacer on the way home from getting the table.

We’re still on our way to filling our walls, but it’s been fun to put up things with them, to have them help me shape our space and for them to take some ownership at making something new.

And finally, the younger child who had issues with going to sleep in her bed earlier this year has been perfectly content to go sleep ahead of the older child in their shared room. With only a few exceptions, I have stayed off devices after dinner, holding no expectations about getting anything done unless there’s something pressing, which is usually related to school or the kids in some other way. So, other than taking out the dog one last time, we have time to connect and then after 8:30ish, I’m free to have heart-to-hearts with my older child. Sometimes they are fun, sometimes they are topical, and sometimes they are little upsetting. But they are important, and I love not feeling pulled in any other direction.

Usually the older and I go into our bedrooms at the same time. With the dog often cozying up to me or sometimes just looking cute sprawled out at the foot of my bed, I stay up for a bit to journal, something I didn’t much model before but now it’s being seen. I then usually read some fiction, which has been a delightful way to end the day.

And that’s what separation looks and feels like, two months in.

This is my first post on this blog in nearly a year. I’ve written some on Mindful Healthy Life, but I’ve also reserved my energy for creative writing – on my novel and some new flash fiction – and for my kids and for some paid work, which is increasingly important given the expenses incurred by separation.

Instagram has been getting more action from me these days, which isn’t super surprising considering how much I enjoyed it when I posted a photo and a poem every day for a month.

My writerly, creative and feminist Instagram account is @jessicaclairehaney where I initially posted about the separation on Valentine’s Day, the first morning my kids woke up in my townhouse.

My wellness-oriented and DC-area resource Instagram account is @mindfulhealthy, where I post more about nature and local events and sometimes brands I love. I posted about the separation there the following week.