It feels like about 90 days since I woke on November 1 with the intention of blogging every day for NaBloPoMo and working on my novel every day for NaNoWriMo. I made it three days for sure (maybe more that I didn’t tag!) had some great and productive mornings, but I have also been sidelined by many days of illness: a lot of it my own, some of bestowed on my kids.

I am trying to get through each day with an open heart and a willingness to learn from whatever is going on with my body. I’ve lost momentum, but I haven’t lost heart. 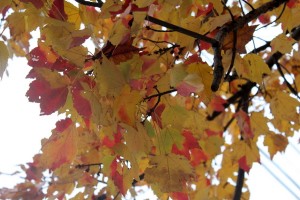 Being kind to myself is doing whatever feels best during the bursts of energy I have and not making myself wrong for any self-imposed failings.

There is plenty going on behind the scenes as I think about my developing business and about my novel. I have faith that those projects will both be realized one day, at whatever is the right moment for them. True, that’s seeming increasingly further away, and I do worry a little about people who’ve expressed enthusiasm getting a little impatient. But I can only do what I can do.

I cannot work after my kids go to bed, not more than a half-hour, or my health will suffer. I do not have on-call babysitters or an au pair or grandparents I can call on for help, not without a plane reservation, and that’s only one or two out of six. Even the weeks I’m well, whatever those look like, I can’t recall, I usually have some kind of an appointment to try to support my physical improvement. I don’t go out to eat but rarely. Even when my husband takes my kids or gets take-out, I still usually eat at home food I cook myself to avoid stomach upset.

I feel great when I juice but don’t do it as often as I’d like because it just takes too much time to prep and clean. This I would happily outsource if I could. Yesterday I got a green juice at Nourish Market (along with a lot of MTO Kombucha) and another green juice again an hour later at the Merrifield MOMs market. Both delicious, both organic. 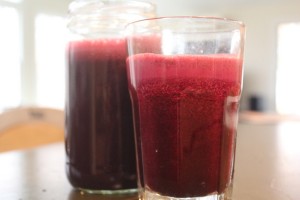 Standing tall, standing proud — homemade juice with the last of the homegrown cucumbers and some homegrown kale and lots of farmers market beets.

I imagine a lot of people probably wonder what the heck is up with me, being so preoccupied and recently so sick. Why won’t she just take antibiotics, I bet they think. Because my gut health is so precarious, and such a precursor for everything else, it just is not an option if it’s anything like an option. That card must be pulled out only for some truly emergency scenario. If I use it up on a fever and virus that isn’t all that bad when other remedies can probably take care of it and actually get to the core issue, well then I will be in such a vulnerable position if and when something serious like a car accident does befall me.

I’m trying to take it as a good sign that my body is fighting off these intruders by mounting this fever, day after day. Maybe in the past it just let them in, gave them a tour of my body, and pointed out the weakest areas where they could do the most damage. Here, hang out in this cozy spot for a few years and screw things up in a way she’ll never be able to trace! When I saw Dr. Thomas Cow 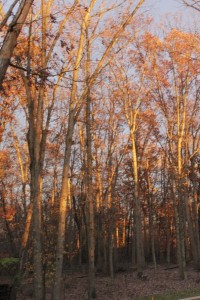 an speak a few years ago, he spoke of the power of fever and noted a study that showed people who hadn’t had fevers through their lives were more likely to develop cancer than those who had. It’s not normal not to get sick.

But three fevers in one year? And two of them in a month?

At least I’ve had a good view of the changing fall woods.

November 18: The importance of laughter

November 14: The floor that broke the Corelle plate: Musings on so many sick days

November 9: A weekend of many possibilities

November 8: Humor in Parenting (and Breastfeeding!)

November 7: Jealousy in the face of children’s periodicals

November 6: So many choices: A blessing and a curse

November 4: All I needed to know about myself I learned on Land/Sea

November 3: Day 3 of daily writing: a poem out of season

November 2: The desire to write: Swallow and spit

November 1: The beginning of some kind of writing: Starting NaBloPoMo