It didn’t look like it was going to go well, this New Year’s Day. I had been eating pancakes all morning (sugar-free and GF but not GAPS-legal) and was wearing the world’s frumpiest sweatpant/pajama combo. My daughter was reaching up to the counter to help herself to the sausage she didn’t eat at breakfast while I undertook the impossible task of catching up on two or more weeks’ worth of emails and my husband and son were watching sports highlights.

It was 12:15, and we sort of had a plan to leave around 3:30 or 4:00 to take in some of the National Zoo before they turned on the decorative lights and fueled up the zoo train and tube slide at 5:00 for the last night of Zoolights, an excursion would be 1) risky on the night before the kids had to return to school at 8 a.m. the next morning and 2) completely stupid if my daughter wouldn’t take a nap. (See this NPR report on why consistent bedtimes matter.)

No one was dressed. Nothing was put away. I was about to declare the day a total loss but instead said out loud to my husband:

“We have got to get outside.”

I’d received the day before a slightly cryptic thanks-for-your-support email from something like the Virginia Department of Natural Resources and saw a promotion to get out and hike on New Year’s Day. My family sucks at hiking. Or rather, I suck at getting my family to hike. I love hiking, but we have not made it part of what we do as a family. It’s one of those ways where my values and who I think of myself as absolutely do not match up to the reality I have created.

I was all in a huff about the notion from this email that even non-hiking people were doing better than I was at getting their families outside. The sun was shining, and our backyard opens to a woods, so we didn’t even have to get in the car. My husband heard the almost-crazy in my voice and got the kids upstairs to brush their teeth and get ready.

My son was hungry, so we stuffed him with some more pancakes and sausage. We put jeans over the girl’s pajama pants. I put on a yoga tank and then pulled my grubby t-shirts and sweatshirt back on and zipped up a parka to partially cover the fleece pants I’d slept in.

Off we went out our back door, crunching over dried leaves, checking out the fallen trees we hadn’t inspected since shortly after hurricane Sandy a year ago October.

Now, I had spent most of November and December either hacking and coughing or in pain from two different bacterial infections, or taking remedies and baths and making broth to try to heal. I couldn’t even walk upstairs without feeling woozy. I even had to drive to the school bus stop. I’d felt like but a shadow of myself. The fact that I could finally walk in the woods was huge. 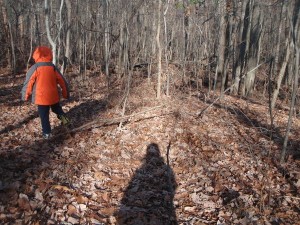 My son, who used to have the lowest endurance of any otherwise healthy kid his age, climbed and balanced and ran. 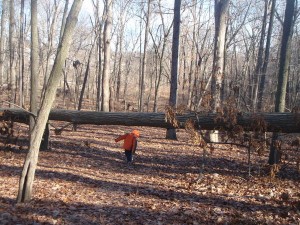 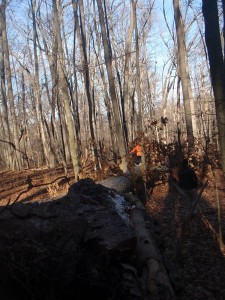 Also amazing was that my three-year-old wanted our hands to hold down and up hills, but she never once asked to be carried, even up the super steep hill on the way back home. 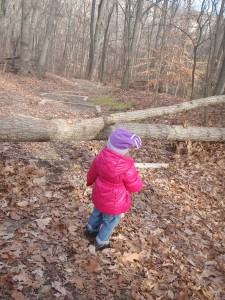 Halfway through, my husband and son went ahead and then did sprints. I played tag with my son at the playground and actually ran. And then walked home — uphill, alongside my daughter and holding her happy little hand in mine — with no wheezing or coughs or pain. 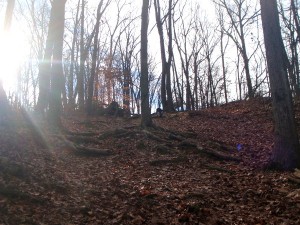 And then I put my daughter into bed for a nap and she actually fell asleep.

And then I made dinner, while my son played with the neighbor kids (who were practically in our yard anyway) outside for close to an hour before he said they wanted to come inside. I said sure to them playing the newly carpeted and moderately-organized basement without feeling a blast of anxiety in my throat. And I changed my clothes in case their parents came over.

After my daughter woke up and we kicked out the neighbors, we all feasted on  burgers, sweet potatoes, cauliflower, broccoli, and green beans. We finished eating by 4:10 and got in the car and arrived at the Zoo well before the parking lot or the attractions got busy. It was a truly a lovely time. After not having been outside hardly at all in the past few months, it was really magical to feel so good and have such a great experience with my family. 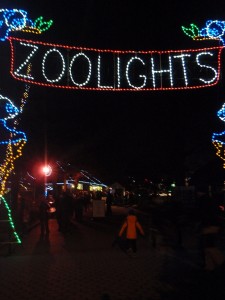 My daughter even told my husband twice that she needed to pee and went with him without complaint (or accident). The carousel and the train were both declared by her to be “super fun.” I don’t recall hearing one whimper of “Aw” about anything we’d missed. It was just a good time.

And I did not collapse.

Although I cannot know what is to come and how I will feel tomorrow or the next day, I am grateful that I was able to have two outdoor excursions with my children that would have seemed impossible as recently as a week ago.

After feeling like my body had mistakenly turned 62 this year instead of 40, I emerged from New Year’s Day feeling like I just possibly might have a chance at recognizing myself in the mirror and maybe even planning ahead for brighter days and bigger challenges.

I can’t be sure exactly what lies ahead after the blur that has been the last two months, but I do believe things yet come back into focus. 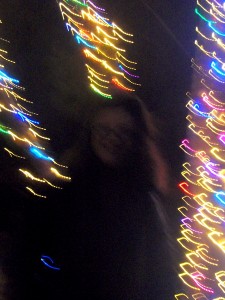 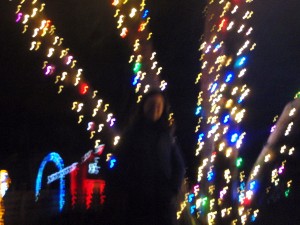 Or that I will learn to appreciate things just as they are, even if messy and hard to understand.

After the kids were in bed, I logged on to Facebook, which I typically avoid when I feel like crap, which is to say I haven’t been on it in weeks. I asked about the white trees I’d seen that day and learned from several friends that they are sycamores, totally common around here.

How could I have missed this? For years?

No matter what might drag me down in this new year, I’m going to try to keep looking up. 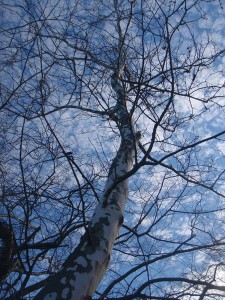