You are here: Home / Activism & Politics / Let them eat lunch, from home

Eating close to the source is something I’ve been working toward for several years, ever since I started trying to get my health on track in the face of major digestive issues, infertility, and Graves’ disease (autoimmune hyperthyroidism). I was almost embarrassed to request Barbara Kingsolver’s 2007 Animal, Vegetable, Miracle: A Year of Food Life (P.S.)

when it popped up on the From Left to Write Book Club list; I couldn’t believe I hadn’t read it yet!

Food procurement and food preparation require a lot of time around here, and I don’t do it just so I can stand up on a soapbox. I do it because my health depends on it.

When switching from a vegetarian diet prompted a speedy return of my fertility, I started to become a believer.

When getting gluten and dairy out of my diet allowed a lifting of the fog of depression that had settled on my shoulders when I was about four years old, I carried a new flag in the food-as-medicine parade.

When getting off all grains and starches — and even raw veggies — ended months of cramping and irritable bowel, I came to realize just how damaged my gut had been after 30 years on processed gluten-heavy foods and how long it would really take to heal.

Some people feel they can’t financially afford organic or locally produced foods. I physically can’t afford to eat anything far removed from its source or pumped full of chemicals. As a result of my particular health journey, much of Kingsolver’s general arguments are familiar to me. My family and I still have a ways to go before our gardens keep us from going to the grocery store for more than a day or two, though one of the reasons we are renovating the house next door is because of its larger yard.

We do, however, get to the farmer’s market at least a few times a month in the winter and often a few times a week in warmer seasons. Our eggs, milk and meat come from a local farmer to a weekly co-op drop. Even though I am still tempted by the allure of dining out, I get sick when I do.

So today, I’m one of those people other people say, “Oh, you’re so good” about or that people roll their eyes at because I raise concerns about processed foods. It’s not because I believe I’m morally superior. It’s because I’m sick. And I really don’t want my child or any other child to be sick because they ate a lot of bad stuff on my watch.

So I make my son’s lunch and his snacks, and gluten-free cupcakes and the like when there is a party. It drove me nuts to hear about a preschooler at a North Carolina school being given the school’s chicken nuggets because her from-home lunch didn’t appear to fit USDA dietary guidelines. If someone gave my gluten-free, soy-sensitive son any food with more ingredients than you can count on two hands, I’d have a fit. I’ve seen what even so-called natural treats and snacks do to him. He and I are cut from sensitive cloth, and I don’t want him battling major health issues when he’s my age if I can help it by feeding him good stuff now. Say what you want about moderation or a little of something some of the time not hurting: I see otherwise in my body and in his behavior.

Sure, I might later learn something that changes my mind about food, but I figure if I go back to wisdom of people who lived in a time before rampant Diabetes and other modern-day health concerns, I’ve got to be doing better than what most of our parents were doing 20-30+ years ago.

So right now there is pot of chicken bones on my stove, making mineral-rich, gelatinous broth from the reasonably local chicken we bought at MOMs Organic Market and the wings I got from my farmer. (I recently furrowed my brows at a “gelatin-free” dessert a Trader Joe’s: I know that I thought gelatin was a gross concept when I was vegetarian, but gelatin and broth are wonderful healing foods). 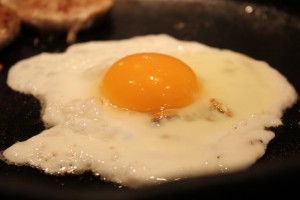 This is what a pastured egg looks like -- dark yellow or orange yolks.

The eggs we’ll have in the  morning are from local pastured chickens and have yolks darker than most anything you’ll see in a store. The greens and meat I’ll eat will be local, but the kids might have a Wellshire sausage or frozen peas in broth. There are some things I do still get at stores. I only read as much as I could fit in during nursing sessions (honest to goodness, my daughter signs for “nurse” but says “book” when I ask if she wants to). But already, I see areas for improvement especially when it comes to shipping. I’m thinking I’ll cut back on the coconut oil and use more of my farmer’s lard (since I can’t tolerate butter).

At the pancake breakfast we attended this morning — to which we brought our own GF almond flour pancakes — I felt out of tune with the season as I spooned up blueberries, strawberries, and blackberries for my kids, but I am heartened that my almost-six-year-old does know the phrase “in season” and is starting to put it together about what is happening in nature and what is going on his plate. If we at least buy lots of berries and peaches — and pick peas! — when they are in season and freeze them or learn how to can them ourselves, that will be an improvement.

I’ve long been thinking about including the ancient science of Ayurveda into my healing palette and am intrigued by its adherence to seasonal rhythms and menus. My Holistic Moms chapter is having a speaker on the topic in April, just as the bounty of the growing season will be starting to appear. When I got a copy of Didi Emmons’s Wild Flavors: One Chef’s Transformative Year Cooking from Eva’s Farm

from Chelsea Green Publishing, a world of possibilities opened up, and now is the time to get started on that garden! However, since the only way I can get fresh veggies into my tender belly is by juicing them, it’s hard to think of not just buying whatever I find at a good price. But maybe a little more season-mindedness and locavore eating would help my body heal itself more readily.

—
Could you live an entire year eating locally or the food from your garden? Barbara Kingsolver transplanted her family from the deserts of Arizona to the mountains of Virginia for their endeavor. Join From Left to Write on February 21 as we discuss Animal, Vegetable, Miracle: A Year of Food Life (P.S.)

by Barbara Kingsolver. As a member of From Left to Write, I received a copy of the book. All opinions are my own.