It makes me sick not to write. There are so many interviews pieces I want to finish, ideas I want to share, moments I want to record. Even healthy food putrifies if it stays in you too long. To not write is intellectual constipation. It hurts. And it stinks.

But I feel like I have little choice. That’s probably not true. But that’s how I feel.

When I finally did the homework for the second Mother’s Self-Renewal class scheduled for yesterday (which I didn’t end up attending), the first thought that popped into my head at the prompt “What is your heart’s greatest desire?” was: “Expression.”

Any wonder I have a thyroid disorder, at my fifth chakra?

And then, when Renee Peterson Trudeau’s Mother’s Guide to Self-Renewal asked me to imagine myself full of regret at the end of my life and think of what would I most regret not doing, the answer was “travel.”

The thing is, when you can’t eat grain, starch, fruit, or fresh vegetables, travel is a challenge. Either I spend hours in preparation and then tote around a ton of food (and cook wherever I go), or I get sick. Sick and in tummy pain in the short term, and I’m delaying my recovery for the long term. So I stay home.

And as I read the book, my self-pitying rather than self-renewing mind crossed off all the fun treat-type things she suggested that I can’t do (not without negative repercussions) because of my stomach or skin or overall fatigue: swim, pick up food for a picnic, get ice cream or yogurt, go to yoga (just sounds exhausting right now), sip green tea, go to a wine bar. Even a pedicure seems out of the question. 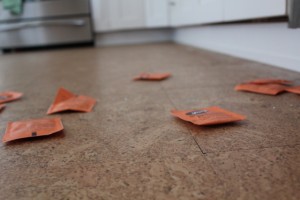 places. She often puts them back, in her own unique way, on her own timetable, but there’s only so long I can step around all the scattered tea bags on the kitchen floor.

It’s one thing to be a terrible housekeeper on your own. It’s another thing to teach said slovenly lifestyle to your kids. Payback in Legos, a thousand-fold.

Or so it seems. On one hand, self-care seems like it’s not even an option: it’s just a necessity. I eat poorly, I hurt and can’t function. So I don’t eat poorly. But I do eat annoyed, or rushed, and without having really breathed or connected to my body during the day, because it just takes too much time to pause and focus when there is so much to do.

And so many packets of tea on the floor.

When I read in the book, “What would motivate you to make your self-renewal a priority?” the answer that came was “cancer.” I don’t mean this lightly. The seriousness of a diagnosis has been on my brain, with the recent death of Toddler Planet‘s Susan Niebur (known not so much by me but a close friend of many in the DC blogging community) and with the year anniversary of my friend Liz‘s surgery and the necessary weaning of her son as she pursued breast cancer treatment. It was heartening that doing some Emotional Freedom Technique at last week’s Holistic Moms Meeting helped me get over the jilting of a mutual friend and be able to make it to a celebratory playdate for Liz. The friend actually asked me a question about my son’s school, and I answered. Small talk never seemed so sweet.

But the mojo couldn’t keep up with my February-Into-March blues. It’s now been 25 years since my brother committed suicide in this bleak midwinter time, a week before my 14th birthday. But the pall still hangs over the calendar.

So when it began snowing on Saturday morning, I almost wished it would continue so that I could rationalize skipping the Self-Renewal class. Ridiculous, I know. What brings me joy also causes stress. That’s kind of a recipe for disaster.

After the first class, I came home joyful but then felt like my balloon popped when I got home and that joy wasn’t reflected back. It felt like if I went again — on this day when our contractor scheduled a last-minute meeting to go over some important details — I would pay for it later. All my “energy goes out of the house,” I’m really good at “doing things for other people but  not my family,” I “prioritize time at the computer and not  keeping things organized and uncluttered,” that’s an awful “lot of gas to waste” … these are the arguments  replay in my head when I’m weighing whether or not to pursue something that isn’t necessary.

The self-renewal class was to start at 3:00, which meant I should have left at 2:15. That meant I needed to get the baby to sleep, shower, and eat by about 2:00. I managed to print all the info I wanted my husband to share with the contractor when he came at 3:00. The baby didn’t wake from her nap after I left the room. She didn’t wake when I showered. But just as I was finishing eating, she woke wailing.

My husband brought her downstairs, and she was not pleased. “Was she at the door?” I asked. “In the bed,” he said. “Then she probably wants to sleep some more.” Up they went again.

It was 2:19. I was just finishing eating, listening to her cries.

Forget it. I’m not going.

To the email I’d pulled up for address and directions, I hit Reply All and sent my regrets. After a few minutes, I went upstairs to take over operation “get-the-baby-to-nap-more-than-45 minutes.” LJ waved me off before the baby could see me.

I could have left then. But I didn’t. What if the contractor came and LJ was still upstairs, what if they were both asleep? We needed to talk about our windows, dammit! If I’m here, at least he and I can start the conversation while extra precious drops of sleep slip into my daughter’s cup, possibly giving her the cue to sleep longer next time. The intricacies of slumber are all-consuming these days, especially after last week’s  talk with a sleep consultant.

The idea of getting joyful, speeding away to enjoy a car filled only with the sounds of NPR and then communing with other mothers felt impossible, irresponsible. I was still sick with a sinus infection, still hungry with nothing safe to snack on for the next four hours out of the house but nuts, nuts, and more nuts. My son would come home from his playdate in an hour and ask for me. I’d come home to who knows what for the kids’ dinner and likely nothing but grumpiness for my dinner. And surely I’d be starving again by then. The baby might wake mad again any minute and ruin my husband’s chance to talk to the contractor without distraction.

So, instead, I cleaned. It was productive. The contractor meeting was useful, though if I’d known it was going to start a half-hour late, I might not have rationalized myself to staying home. Still, I was kind of glad I was here. There was about twelve minutes of being happy to be all together as a family after my son got home before he started whining and threatening nasty stuff.

No decision I make is right. I don’t know how to parent.

Something in me died, or went into hibernation: the idea that there was any hope of my getting my needs met. The idea that my needs were worth meeting. The idea that I could prioritize anything over tasks in front of me, like cooking, diapering, stopping to give my son attention, and dealing with household matters.

I turned off the self-care switch.

It’s probably safe to say that my son’s meltdowns that day and the next might have had something to do with a dour-looking mother. One whose face seemed to be having an exceptional reaction to gravity. Shit, I can’t even be selfless and not have that fuck up my kid! Nothing I do is right!

It’s taken me three days and at least five different times sitting down to write this (but I’m putting the time stamp back to when I started it). It’s likely that writing actually helped me climb out enough to see that I can make it the rest of the way. So did tutoring, and talking to a friend, and sunshine, and going to my son’s school to watch him mesmerized by author/illustrator Laurie Keller‘s presentation (and the subsequent book he started writing, that he made sure I understood he wanted people to buy).

If he can manage to follow a stranger’s directions and, in the space of eight minutes draw an otter and a happy doughnut, maybe his mom can try to follow some directions to “reclaim, rejuvenate and re-balance” her life.

So what’s the homework for next class? 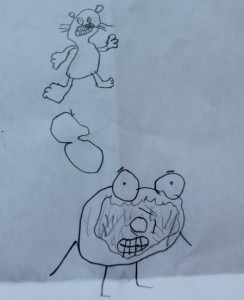