You are here: Home / Activism & Politics / Grades are not the thing — musings on (Waldorf) education

There it was in this morning’s Washington Post: the same argument against GPAs and SAT scores as a predictor of success that longtime Waldorf educator Jack Petrash had discussed last week at a talk at Potomac Crescent Waldorf School.

In his piece in the Outlook section, “To get the real star students, colleges should look beyond SATs,” Robert Sternberg outlines what I imagine he argues in his book, College Admissions for the 21st Century. The gist is that kids with high scores can do well in some jobs — like bank analyst — but that high school grades and test scores are not predictors of college grades or greater success. Tufts University is a case in point, and Sternberg talks about a study called the Rainbow Project to see how a more creative-seeking college application affects the admissions process.

Petrash had said much the same thing in his talk, “Back to the Future.” One of the books he referenced was Outliers: The Story of Success by Malcolm Gladwell. The author notes that institutions with high test score requirements do not disproportionately produce Nobel Prize winners. Petrash compared the predictable answers of high IQ students to the questions of “what are the uses of a brick and a blanket” with the creative – and entertaining! – answers of students with lower IQs but who exhibited divergent thinking. When our children use the same simple wooden toys in so many different ways – as a cradle, a bowl, a lake, a phone – they are learning to be divergent thinkers. 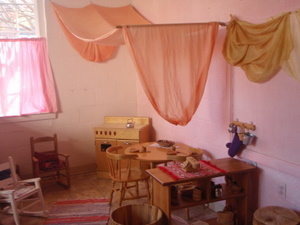 Petrash also talked about Georgia Tech, which turned itself around by looking to applicants placing more of a value on experience on teams, in band, or in choir than on standardized test scores. At Washington Waldorf School, Petrash said, all students are required to sing in the chorus and to participate in team sports, for which there are no try-outs.

Waldorf classrooms develop the connectedness we need in our society, creating a family when many of us live so apart from extended family. They also create a sense of safety: students know what the day will be like because of the predictability of the rhythm.

Waldorf education, he said, prepares students for the future even as it seems to look to the past. The beeswax and handmade books may seem of another era, especially when teachers in public schools have classrooms equipped with smart board and laptops. However, Petrash explained, when he reads what is being said in education today, he realizes that Waldorf provides exactly the kind of whole-brain education we need for our future. It prepares students to be divergent learners who see more than one answer and are capable of seeing the questions no one else is asking.

Petrash also referenced Thomas Friedman,  New York Times columnist and author of The World is Flat: A Brief History of the Twenty-first Century, who spoke some years ago at a nearby college preparatory school where he told students their education had them using only half of their brains – the left-brained half, governing cognition, logic and analysis. These abilities, he said, are necessary in jobs that can be done by computers or be outsourced, but it’s the creativity of the right side of the brain that students need to be prepared for the job market.

Friedman had been reading A Whole New Mind: Why Right Brainers Will Rule the Future, by former Al Gore speechwriter and investigative journalist Daniel Pink.  In his book, Pink identifies six capacities that Petrash said were Storytelling, Art, Play, Empathy, Finding Meaning and Seeing the whole: symphonic thinking or seeing the motifs

These six capacities, Petrash said, represent the whole-brain approach that is Waldorf education.

Petrash described how even the simple act of the learning of letters embodies storytelling and meets the needs of all types of learners as well. He described how he taught the letter “S” through a story of a servant who had to serve the king a snake on the silver platter. The story provides phonemic awareness through all the “S” sounds used in the story and the accompanying poems the children learn. Visual learners get a pictorial image through drawings and beeswax renderings, and kinesthetic learners might run an S on the floor. The approach is multi-sensory.

There is also scientific evidence that demonstrates that Waldorf education is not “simple.” In her book, Endangered Minds: Why Children Don’t Think and What We Can Do About It,  Jane Healy explains how neuroscientists have determined that brain scans showing movement of electrical impulses across the brain are displaying evidence of higher-order thinking. “Wherever Waldorf looks unusual,” Petrash offered, “that’s where the children are having whole-brain experiences.” This happens, he said, in form drawing, geometric drawing, handwork, and eurythmy as well as in the playing of a stringed instrument. Petrash argued that Waldorf is doing exactly what is needed for the future in helping to cultivate whole-brain thinkers.

The other capacity in Pink’s book that Petrash addressed at length was “play.” Various findings have shown, he said, that creative people stay playful, including Albert Einstein, who said that imagination is everything. Architect Frank Gehry has said his best ideas come to him while he is ice skating. Apple CEO Steve Jobs did his best work after re-creating himself upon successfully battling pancreatic cancer. This capacity to re-invent oneself is an attribute of successful leaders discovered by Harvard Business School researchers Warren Bennis and Robert Thomas in their book Geeks and Geezers, Petrash noted.

Waldorf play-based kindergartens “keep children young,” Petrash said. Play fosters in them divergent thinking, or the ability to see many answers to the same question. The way children use their brain is, in fact, how the brain will continue to develop. How they think influences how the neurons will myelinate, which influences how they can think in the future. In this way, Waldorf education prepares children for a complex world. “We need inventiveness and imagination to solve the world’s problems,” Petrash said. Convergent thinking, like that required to determine the correct answer on a standardized test, will not solve problems we have not already solved.

In public education, kindergarten has become the new first grade; students age five and six are learning letters and math and being verbally tested, a process that takes about a month worth of teacher time. Our society worries that our children will fall behind, but we should be worrying that we are making our children old before their time. “Are we impressed when we meet a 25-year-old who acts like a 35-year-old?” Petrash asked. Premature aging is a sign of illness, and what we want to cultivate is youth and vitality. 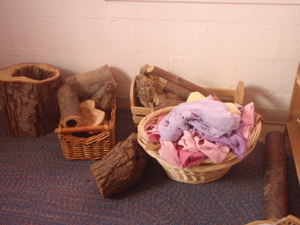 Silks, cotton fabrics, and natural-world objects can take on a variety of identities in a Waldorf early childhood classroom

The integrated curriculum in Waldorf middle and high schools encourage children to see the whole picture. Petrash gave the example of architect Mark Pierce, who explained in the magazine The Urbanite how he drew on his knowledge of biology – and the building practices of African termites – to design a building in Zimbabwe that functioned using similar principles to regulate temperature such that air conditioning was not needed. The future is going to require a creative mind, and Waldorf schools are preparing children for that future.

Waldorf classrooms develop the connectedness we need in our society, creating a family when many of us live so apart from extended family. They are, in fact, a home, which is why so important that they be places of beauty and order; Petrash said that studies have shown that students learn better when the classroom looks like a home. Waldorf classrooms also create a sense of safety: students know what the day will be like because of the predictability of the rhythm.

Petrash concluded his talk reminding us that, while we of course want our children to be prepared to get good jobs one day, what we want first and foremost for them is to be happy. Many of the fairy tales told in Waldorf schools end with “happily ever after,” and children learn that they have all parts of those stories within them. They will feel fulfilled when they are utilizing both sides of their brain.

Parents raised several questions after the talk. Petrash said he expected it would take a long time for public education to come around to some of these understandings and that Waldorf educators would likely remain in the minority. However, he did encourage Waldorf enthusiasts to be aware of what other people are doing so that we can find common cause and build bridges. He encouraged parents to look into “The Ten Talk” videos online to see Ken Robinson, author of The Element: How Finding Your Passion Changes Everything, talk about education that engages people’s emotional connections to one another (here’s one).

Petrash also cited Theodore Sizer’s book Horace’s Compromise: The Dilemma of the American High School, which concludes that small schools are the answer, and noted that Waldorf schools are small because education is about relationships. With students looping and staying with teachers for multiple years, teachers learn how to draw students out.

I listened to Petrash’s talk (and also a lecture by Celebrate Calm founder Kirk Martin the next morning — more on that later) both as a parent and as a former public high school English teacher. Part of me has been so disappointed in reading about West Potomac High School, which recently changed its grading policy to allow indefinite incompletes instead of Fs and to allow (at one point) no grade lower than a 50, even if a student misses a test (to which I ask, what if a student scores lower than that through best effort?). An outcry seems to have reversed these policies.

It’s not that I think grades are gold but rather that if you are going to work in a broken system, you need measures that at least make things consistent and uphold the values you say you are promoting, like personal responsibility and work ethic — and numbers. You can’t say that scores are all-powerful and then give all sorts of mixed messages that they really can be fudged.

That said, I’d rather that all students have the chance to “unfold” naturally rather than being tested from such a young age, tested to see if they can come up with the same answer as everyone else on tests that cannot avoid privileging some kind of knowledge over others. I have been a fan of critical pedagogy advocates like Teaching for Change and Rethinking Schools. And now I just think: the rethinking needs to go a lot further. The feeling in my son’s Waldorf school is wholly unlike the feeling I had in my classroom, which, I admit was insanely messy (and yes, it was like my home. I’m working on it.)

My son is only four and a half. But Petrash’s talk has me realizing it’s time to get my head back in the game of education, for his sake and for the future society of which he will be a part.

When it comes to your child’s education, what do you value?

Previous Post: « Book reading as therapy: Monica Lemoine of Knocked Up, Knocked Down
Next Post: Trying to “celebrate calm” »