You are here: Home / Activism & Politics / Book reading as therapy: Monica Lemoine of Knocked Up, Knocked Down

I had the pleasure two weeks ago of hearing Monica Murphy Lemoine read from her book Knocked Up, Knocked Down: Postcards from the Brink of Parenthood while she was in town for a conference on perinatal and infant death. Let me tell you, Monica is no less engaging in person. 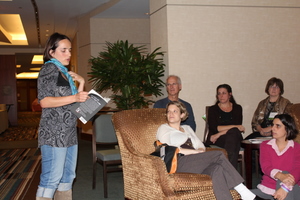 Her book was already funny – “darkly humorous,” as she says – but hearing her read aloud was highly entertaining, if you can say such a thing about a book about miscarriage and stillbirth. Inflections, pauses, hand gestures, oh my!

Monica addressed a group made up of a lot of social workers and other practitioners who deal with grieving parents. She focused on chapters that dealt in part with the process of dealing with loss, including one chapter about the world’s worst support group, where she was the only mom in attendance, and neither of the two moderators had had miscarriages. After that, Monica never attended another support group, even after her stillbirth and an additional miscarriage. “I felt alienated,” she said.

Monica opened the evening describing the process of writings as cathartic, and, when asked later, said yes it was “very, very, very therapeutic.” (I swear, I have it written down three times in my notes!) Monica started the book a year after her still birth, noting that it takes while to process an experience like that. And yet, she also said that her first miscarriage was harder to deal with because it was the first bad thing that had happened to her; it was her first realization that there are things beyond her control.

Monica concluded the reading with the final chapter of her book, where a salsa dancing lesson in Quito, Ecuador in some ways restores her sense of her body as something other than a producer of babies who don’t live. Similarly, she explained that doing book readings allows her to re-feel what she went to, to re-experience it and learn something new. “It’s your therapy,” offered the practitioners in the audience, welcoming her to her first real support group. 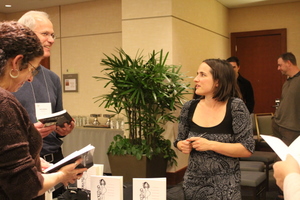 As my friend and I talked on the way home, it was clear that Monica was not alone in having benefited from the evening. The reading spurred both of us down some path in how we think about things: about grief, loss, and in my case, self-perception. It’s only lately becoming clear to me how guarded and distant I was from my friends who were trying to conceive before I even got my period back and who were having second babies at home while I still licked my wounds over my c-section. And yet, despite having to delay conception both times for various health reasons, with both children, I conceived on the first try. Kind of flies in the face of my story about my body not working, doesn’t it? 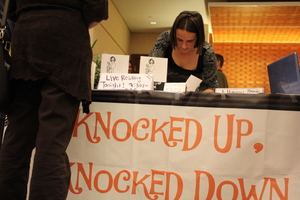 When I first greeted Monica before the reading began and asked how things were going, she shared how bizarre it was to be away from her seven-month-old son, Sean, at a conference with so much talk of death and suppliers of baby coffins. She pulled up his picture to show me, and then opened her reading introducing the crowd to her “living son,” who was back home in Seattle. Hours earlier, she had changed her return flight to leave the following day not at 4 p.m. as scheduled, but early in the morning, something like 7:30, which means she’d need to leave her Alexandria hotel in the 5:00 hour to get to Dulles.

I can only imagine what that reunion must have felt like.

What is therapy for you?