You are here: Home / Uncategorized / Trying to “celebrate calm”

When I first took Rene Hackney’s Positive Discipline class as part of a play and workshop series at Parenting Playgroups, my son wasn’t even two, and he was too cute for words. Just coming off of some intense separation anxiety and just starting to string together sentences, he could do no wrong. It was easy to practice what the class preached, and to think that everyone else could and should, too!

Now, not so much. He’s goofy and quirky and whiny and annoying. My tolerance is low. It’s like I turned back into a teenager and he turned into the parent I roll my eyes at. I forgot what it was like to cringe this much. There’s potty talk, a host of demands, and a never-ending string of bizarre mashups of language — real English words and things that would seem to rhyme.

And it’s sweet that he loves his baby sister, but not when he becomes a health hazard. There’s the risk of suffocation by adoration, the chance he could get so excited about her that he squeezes her toys clear off.

It’s not exactly attractive, this new attitude of impatience and distaste of mine. I am not committed to being this kind of parent, and I hope it wears off when he hits a new developmental stage, or when I’m less newly postpartum and sleep-deprived. 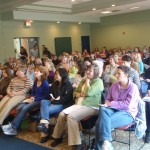 But I do have to admit that I find myself saying and doing a lot of things that I know better than to say or do. It would help to re-read some material (some books I like are in this post), and I plan to take Rene’s play and workshop class again when baby girl is a playful tot. When I heard good things about Kirk Martin’s “Celebrate Calm” workshops happening in my area, I decided to check one out.

I was not disappointed. There is something about hearing someone dramatize parental anger that sends chills up your spine. He was that dad, for nine years. Even if I haven’t sunk to the depths of many of his examples, I could identify with the emotion behind them more often than I ‘d like to admit. And I was feeling like my husband could, too, so I begged him to go to one of the sessions later that evening.

The first and most important thing Martin said is something I know I should know — that our job as parents is to control our behavior and to teach children how to control theirs. We can’t think of ourselves as “responsible” for what kids do, as though we have to fix them or clean up after them, as though we’re supposed to control them. And we can’t let them control us by letting ourselves lose our composure because of something a child says or does. We just have to be the kind of people we would like for them to become. That means patient, compassionate and, yes, calm.

I have read this in books and practiced it with Rene’s workbook. I have complained to my husband about acquaintances who say things like “What is wrong with you?” to their kids and even blogged once about a mom’s negative behavior in a toddler class. I have tried very hard to be a positive mama. But life looks a whole lot different with a four-and-a-half-year-old who is a big brother than it did with just a toddler. So I’m glad I got some powerful reminders and some new  insights. 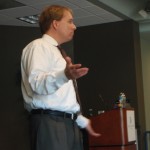 One thing Martin said that I hadn’t heard elsewhere was about video games, something I hope we can stay far away from for a very long time, even if I have caved somewhat on screen time in terms of watching TV. Video games, Martin said, are so appealing because they are consistent. The rules never change. Kids always know what to expect.

Waldorf education is big on consistency. Children thrive when they feel safe and secure, when they fall into a comfortable rhythm. It’s too much freedom or too many peaks and valleys that pose challenges for kids.

So video games provide a techno substitute for consistency when home life — and parental emotions — are erratic. No wonder they are so appealing.

I’ve been trying to wrap my head around a more rhythmic life for a while, and this point about video games and the importance of creating the right home environment for calm and peace — the morning after I heard Waldorf educator Jack Petrash say many of the same things at a lecture.

It’s inspiring when approaches dovetail and the path becomes clear. I haven’t even popped in any of the Celebrate Calm DVDs I bought, but I swear that attending that morning and sending my husband that night were like shots in our arm, boosters (if you’ll pardon the vaccine analogy) to our rekindle our previously waning commitment to a positive, happy home.

And I have to say, seeing the packed crowd hear this man speak — especially with all he had to say about sensory issues and other contributors to behavior, including food — I felt hopeful for a whole generation.

Previous Post: « Grades are not the thing — musings on (Waldorf) education
Next Post: More on healthy food in schools! »