You are here: Home / Activism & Politics / Getting back on the train to social justice

When I first began battling illness in late 2003, my commitment to social justice activism waned. I’d been up against resistance in the high school where I taught as I worked on the issue of racial disparity in AP/honors classes vs. “regular” classes. We’d made some progress, but it was still challenging.

Further challenging, still, was the reality of dealing with 100+ teenagers and worrying about all their struggles at home and in the world. Most of the kids I taught were students of color, and a lot of them faced significant difficulties. I felt responsible for all of them and unable to do much about any of them.

In early 2004, after feeling horrible for months in my body, mind and spirit, I began treatment for Graves’ Disease, autoimmune hyperthyroidism. I also went back on antidepressants and began making a lot of diet and lifestyle changes. I had to go inward to heal, and I simply wasn’t able to give as much to my students.

It was taking a class with Enid Lee and Teaching for Change that really made it clear to me what my limitations were. As we discussed my activism in the school and my work with my students and I shared my frustrations at the lack of progress, Dr. Lee encouraged me to keep at it. “Push again. And again,” she said, or something close to it.

And I crumbled, knowing I couldn’t. I simply wasn’t capable of any more pushing, not without detriment to my health. And the sicker I got, the less effective I would be anyway.

My tears came hard, and I had to leave the class early. Everything I had worked so hard for – in college, in the non-profit world, in graduate school – was beyond my capacity.

I couldn’t effect the change I sought, and I couldn’t heal my body the way things had been going. I decided I would need to leave teaching, believing I might never be able to get well – or to start a family – as long as I was in the classroom. It had been so much work to make improvements in my health; I wasn’t up for the work I would need to do to keep going in the classroom. Or to develop a new way of relating to my job. Compartmentalizing and setting up boundaries just didn’t feel possible. If I didn’t care immensely, I shouldn’t be there.

I wanted to quit but was convinced to join an interdisciplinary team the following year, encouraged that it might feel more supportive, by a colleague who didn’t tell me that she was already pregnant and would be leaving that team in December. I found out in early June after I’d committed to the team and while I was trying to figure out why my periods were getting so long even though my thyroid seemed to have turned around and I was off medication.

I believe that my wise body elongated my menstrual cycle to nearly twice its normal length so I could conceive just a few days after the school year ended and have a restful first trimester, napping my way through the summer.

I started the school year with the knowledge that, if everything went well, I would be leaving by March.

And I was okay with that. Because I had my new role as mother to embrace, I wasn’t for a time as sad as I had been about giving up my profession. And now, 10 years after my son was born, I am still grappling with a lot of health issues, including reactivated Epstein-Barr and other viruses, chronic fatigue, and what does indeed appear to be Lyme.

I know my limits and that I have to be super careful about putting myself in stressful situations. I need to work hard on breathing and eating well. Some people might say I should take on less in my community or with writing, but really, those are things that give me a sense of purpose and about which I’m passionate about. Without passion, I’m just depressed. I am always working on figuring out the right balance.

So I’ve been active on issues of health and wellness, but one thing that has not been much on the scale is my commitment to social justice. Sometimes they overlap, like with the fight for clean air, but I don’t feel connected to the lives of people of color and to the dismantling of oppression the way I did – at least some – while I was teaching. 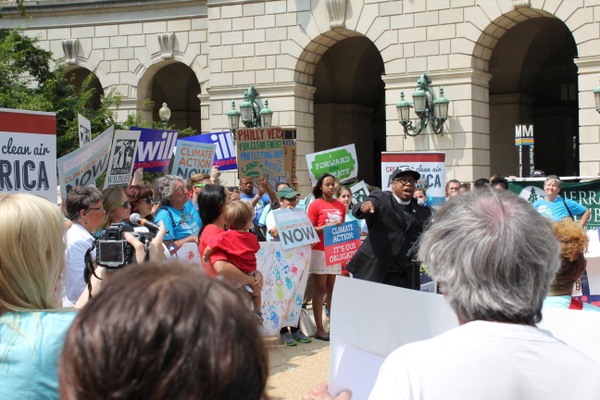 Certainly I have attended events social justice events over the years, and the choices I make in the conversations I have with my kids and the books I read to them are always influenced by my anti-racist background. But other than writing a few things here and there, I haven’t taken much action.

So it felt like a bit of a homecoming to attend a meeting of the Northern Virginia chapter of Showing up for Racial Justice – SURJ NoVA – last night with a friend. I had been heartened by seeing more and more white friends take a stand against racism and violence on social media, and being in a room with a hundred or more other people committed to the cause helped me to feel hopeful about all the awfulness of late possibly leading toward some momentum for change. 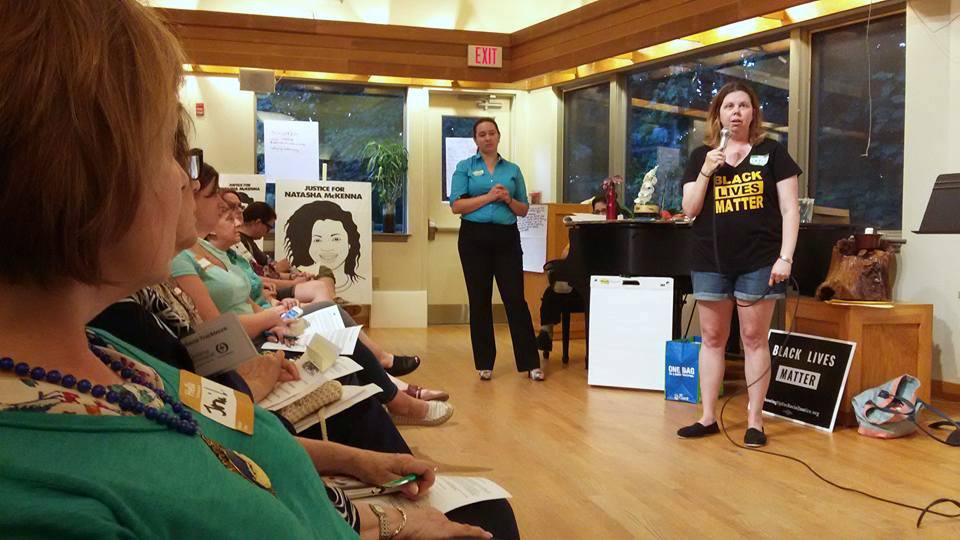 The reason for coming together sucked, but we all refuse to stand behind our privilege and claim we are powerless to effect change. 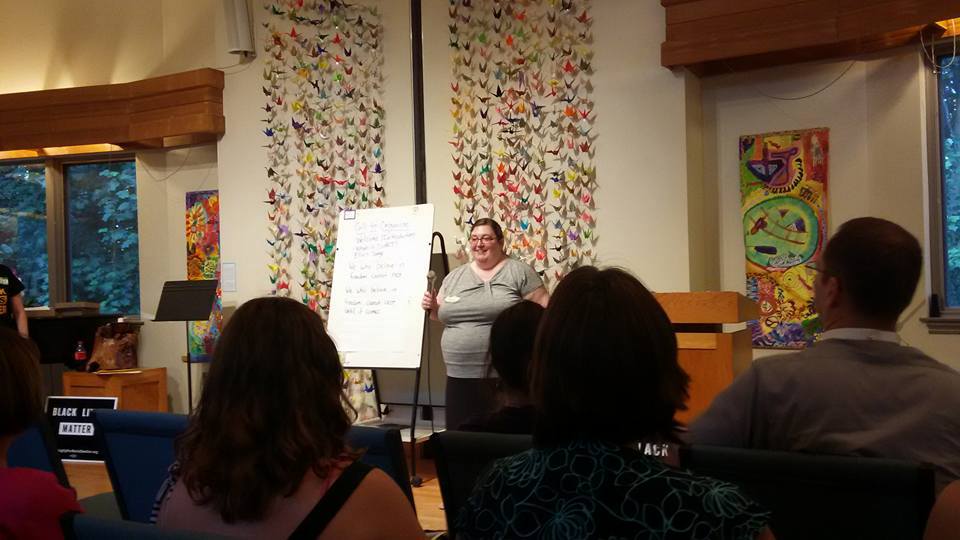 I still don’t know exactly what I can commit to doing beyond finally publishing my piece on my kids being aware of their white privilege. I have to think about what I’m up for with my health limitations and the other commitments I have in my life. But I’m so glad to be in conversation and community with people who are committed to ending racial injustice and who are not afraid to talk about owning their own shit.

Because there is a lot of it. And no one is immune. 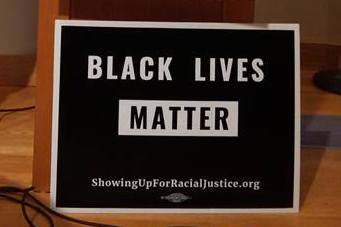 What actions will you commit to taking to ensure that our culture stops tolerating and perpetrating violence against people of color?

Previous Post: « Things I want to remember about this awful week
Next Post: Talking about talking about race and gender »