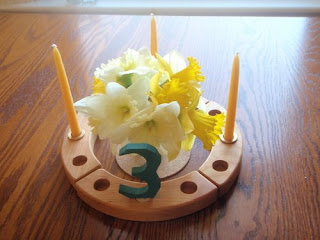 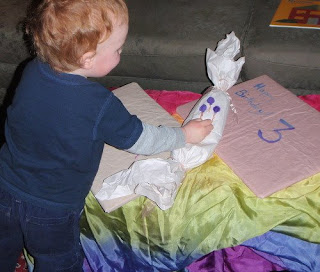 Our birthday celebration this year was to have a bunch of friends over just to play on a Monday morning. It was a little too crowded (too cold to go outside), but it was nice. I did get balloons, but all the food was pretty natural/low-processed — fruit, kale chips (baked kale), rice pasta with veggies, a few bags of Terra and veggie chips, hummus & veggies and my friend’s homemade dosas — soaked rice & lentil pancakes (she added shredded coconut this time, and they were a big hit!). The spread was almost all gluten-free and dairy-free (just some pita for the hummus). I’ll share about the cake another time, but the images I like best were from the Waldorf-y aspects.

We only gave my son three gifts (which I don’t think he would have missed after all the gifts from grandparents and the playdate, balloons and dinner out at the Afghan restaurant he requested to go to). The gifts were just two Melissa & Doug puzzles and an outfit for his Waldorf doll, a gift last year, from Joy’s Waldorf Dolls. I wrapped them in plain paper and painted watercolors on them — numbers, his name, balloons. And I placed them on a rainbow silk I got a long time ago from A Toy Garden. His response upon coming in the door after dinner was wide eyes and “ooh, look at that!” I was so excited that he responded to the natural looking stuff with as much or more wonder as he respond to the UPS truck and the stuff it brings!

I also liked the birthday ring I got for him at Nova Naturals. I just learned that Wooden Wagon has a lot more choices, but I like what we did this year, and he seemed to, too. Thanks to my friend Paula for the lovely centerpiece!