You are here: Home / D.C. Metro / Surviving the unexpected guest

This post originally appeared on DC Metro Moms on March 19, 2009 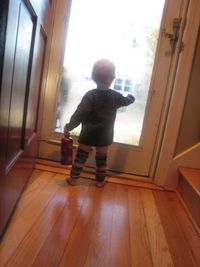 I’ve never been much for spontaneity. Or hospitality. I’m not proud of being a crappy hostess or an anxious mess when things don’t go according to plan, but I can accept that it’s okay because there are other things I’m better at (though don’t ask me what!). Certainly being a parent requires a good dose of flexibility, so I’ve loosened up a little in the past three years. But not much. Then, yesterday, when a friend and her toddler and baby showed up unexpectedly at my front door (a week early for my son’s birthday playdate) and I didn’t melt into a puddle of stress, I realized how much I’d really like be able to go with the flow more often.

What a thrill that I didn’t lose it or push my guests off my porch! I managed to almost act the part I imagine (maybe fairly, maybe not) that a lot of other people naturally play; someone comes over, you let them in and you enjoy their company. Sounds simple enough. But it’s not, not for me. The trouble is that usually I am so worried about the visual chaos and generally thrown off by the shift in the day’s timing that I rarely enjoy any interpersonal connection. Fortunately, yesterday was a happy exception that has me hopeful for my own future.

Maybe it was the yoga. I had just gone to a good class at the gym with a new teacher and was making plans to have this become a regular Monday morning activity. Then I remembered that next Monday I was going to have a few friends over for my son’s day-before-birthday playdate — nothing fancy, no Evite; just a throwback mass email with an offer for snacks, cake and, if it’s nice outside, bubbles and sidewalk chalk.

Seeing as I had almost forgotten my own son’s birthday, I had no problem cutting my friend some slack when she arrived with her 3-month-old in one hand and her toddler’s paw in the other. “It’s not today, is it?” she asked as the girl dropped a handmade bear card on my porch. “I knew it. I’m already an hour and a half late, and if I can get that good a parking spot, this must not be right.” She apologized and seemed ready to turn around, but I was happy to find myself glad to see her and to be able to say without hesitation: “If it’s going to make your life easier to go home, that’s fine, but if you can stay, please do.”

It was nice to know someone else got something wrong; other people’s errors always help me feel safer being human. It also helped that my house was not the clutter-fest it is almost all the time, mostly because we’d had an architect over the previous day to see if we could afford to permanently fix the problem of a postage-stamp-sized living room. The place needed a good vacuuming, and I’m sure it was not up to a lot of people’s standards, but it met mine. I avoided being discovered in my usual state of squalor!

And I suppose I was excited that my son would have some distraction. Our kids are at the age — over 2.5 — when they can actually entertain each other if they’re not fighting over toys. Interventions are sometimes required, certainly, but it is nice to be at the point where it’s easier to have two around than one. If my son and I had just been alone, I would have been sure to hear requests to nurse (we’re closing in on weaning) or to give my son other attention my not-yet-breakfasted self wasn’t up for. Plus this was a day I needed to get dinner into the crock pot early so I wouldn’t have to do anything come 5:00.

So I told my friend to sit outside the kitchen and we caught up as I cut up veggies and she nursed the baby with roughly one third of her brain and kept an eye on the kiddos with the other third. It was honestly a delight to catch up with her in a way I’m sure we won’t have the opportunity with more folks here next week. I even let her see my upstairs (and I’m hoping she was too busy looking at the half-made bed to notice the dirty underwear hanging off the hamper until I flicked it in). And all without raised blood pressure!

In my imagination, most people can handle this kind of impromptu sharing of space all the time. My neighbor doesn’t even flinch when my son pushes his way into her always-neat yet toy-stocked house. For me, daughter of parents who never had friends over, that kind of ease in hosting is something I’ve never known, and I’m usually so damned disorganized, I can’t stand one more variable. My son lights up when people appear and accepts unplanned fun as fun, but for me, it was pretty exciting just to handle a drop-in without sweating during or after. Maybe this mama’s finally growing up.