You are here: Home / The Arts / All I needed to know about myself I learned on Land/Sea

My alma mater, Kalamazoo College, contacted me some weeks back to let me know there would be a commemoration of the 40th anniversary of the Land/Sea Program. Patterned after Outward Bound, this was a special orientation program and outdoor adventure experience for about 30 first-year students in an incoming class of around 300.

In my year, there were five or six groups of five or six freshmen with two older leaders. My group spent our first several days canoeing (and carrying the canoes between lakes through portages, the hardest thing I ever had to do), then several days simply backpacking with that included a 2-day solo experience and a day of rockclimbing at the end, and then we sailed through the Georgian Bay down Lake Huron to Windsor on a ship that I think was a brigadoon.

Land/Sea was a game-changer for me. I got closer to nature and to myself than ever before. I got knocked down and filled with such joy at the grandeur of granite peaks dotted with pines. It was a foundational, transformational experience for which I will always be grateful.

And to think it’s exactly as old as I am!

Nowadays, I think a lot of other schools are doing similar experiences with individual challenges and group bonding and all. Yay for them. But bigger yay for K College who has known for a long time what other places are just figuring out. It has long known the right mix of structure and freedom.  I will never, ever forget the days I spent on the trail in Killarney Provincial Park in southern Ontario in the fall of 1991 or 1994, when I returned as a leader before starting my senior year. I’m not sure if it will make sense for my family for me to return for the alumni trip that’s just been scheduled for next May, but I really hope I can attend.

I could have gone on and on about rain or bear or spending nearby 2 days alone on solo or canoeing my heart out as a leader to ferry someone who had fallen on his solo to be checked out at our base lodge for a concussion. I thought about making some kind of comparison between the experience and the pencil mark in my leg from when I was looking at the Killarney map and accidentally poked myself; it’s still there and will always be part of me. After all, I’ve chosen to have my children at an Expeditionary Learning school that is founded on principles modeled after Outward Bound. I could write a whole series of vignettes or paeans to the program, but this is what I came up with. 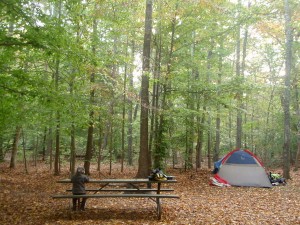 Legacy of Land/Sea: my daughter on our first camping trip

Although the Land/Sea program was one of the things that drew me to Kalamazoo College, it surprises me 22 years later just how much of an impact it had on me. Reading Cheryl Strayed’s Wild, the story of her solo hike on the Pacific Crest Trail in the wake of her mother’s death and her divorce and drug use, brought this home recently.

First I was transported back to my own hike near the PCT that same year, 1995. It was my graduation present from my parents. I can still imagine myself sitting on my bed in the French House at K looking through the Sierra Club catalog of trips. The trip I chose, one that included yoga and meditation during a week in Sequoia National Park, was its own formative adventure, one I never would have chosen were it not for my experience on Land/Sea.

As a first-year student entering Kalamazoo, I’d never been camping outside of Girl Scouts and my back yard. Backpacking? None. My sole experience with canoeing was in 9th grade, a year after my brother’s suicide, on a spring field trip for which I signed up late and during which I got drunk from beer another girl had put into a two-liter of Sprite.

But by the time I was applying to college and was finally taking the “Natural Resources” experiential education class I’d heard so much about from others, a class that included group challenges and individual challenges and a lot of journal writing, I knew I needed Land/Sea.

I needed to go out there and offer to be the group’s “leader” the first day because I loved maps and I liked to lead, but I needed to get beaten down by the first long portage, unable to imagine that any human being could possibly move with the weight of half an 80-pound canoe resting on an already heavy backpack. I needed to have a ridiculously hard day and an intense cry amid the fear of lightning as we set up camp on a rocky island and then to wake up the next day, sore and grateful and in awe of the beauty of a sunrise over a lake.

I needed to learn that everything resets. That the next day always comes with its own challenges, familiar, maybe, but unique. There is only what is in front of you at that moment: that ascent, that tarp, that food. The only thing to do is embrace it and go forward.

When I returned to Land/Sea senior year as a leader, I got to bask in more of the beauty of Killarney from my post as logistics coordinator. It was a dream job. I learned how deeply I love to organize and plan and consider the whole picture. What a gift to have nearly a month in a beautiful place to experience nothing but awe in the face of nature and my own smile handed to me on a platter every day, so happy I was to be in an element I hadn’t known was mine.

On the morning we returned to campus after driving all night, four of us took a sunrise run around Western Michigan University’s track. I had never felt stronger or more clearer of purpose, and I’ve held onto that like a beam of light for over two decades. 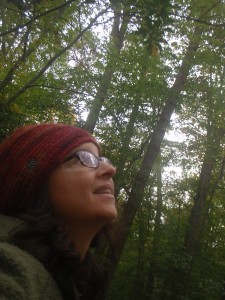 Back in the woods, 20 years later

Day 2: The desire to write

Day 3: a poem out of season

See also the archive of my 2012 poems

Previous Post: « Day 3 of daily writing: a poem out of season
Next Post: Day 5: A found poem »