You are here: Home / Holistic Health / Acupunture and Cupping for Tight Muscles

My neck and shoulders used to hurt all the time. Long before I was diagnosed with Graves’ disease (autoimmune hyperthyroidism) or celiac disease, my health problems manifested in a more physical way. I’ve had some issues on and off since my son was born, especially when I was wearing him in a sling all day, but nothing was like my recent right-should spasm. I think we can blame this one in large part on one weekend of car trouble followed by another of plane travel (including wearing my 30-lb. toddler in the Ergo) and unfamiliar (and harder beds). Of course the lack of a regular home yoga practice followed by a few classes in a row in short succession might have something to do with it, too!

So I called the acupuncture center I used to go to. I love that they provide a back massage before doing the needles on the back side and then have you flip over so they can do some more massage (especially with the sinuses, but whatever part of the body needs it, too) before placing needles on the front. This is a two-hour ordeal but costs less than most 60-minute massages in my area.

I figured this time that they would want to use the suction cups because my shoulder was a rock. Cupping is supposed to help release tension and free up energy. It essentially feels like a bunch of extra people squeezing your muscles at once. The cups go to work while the therapist is massaging another area. 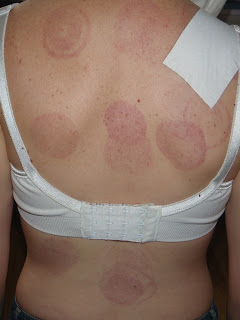 When I was seeing these folks back four years ago as part of my effort to heal my thyroid and regain my fertility, I was also getting treatments in an oxygen sauna. The sauna woman said I should not be bruising so much, and she claimed that one woman came in after getting cosmetic surgery for the express purpose of minimizing her bruising, and it did. As I got more regular acupuncture treatments and also got more oxygen sauna treatments, the bruising did indeed become much less severe and shorter-lived.

I saw these folks a few times a month when my son was a year old. My thyroid was threatening to go low, and I was exhausted from all the night nursing (and nursing around the clock!). When I made this most recent appointment, it had been many months since I’d been to the acupuncture clinic and maybe months since I’d had any bodywork of any kind (at least several weeks). With a lot of projects in the air and my toddler no longer napping, time has been a hot commodity! But I’ve felt pretty good physically, until the shoulder flared up. Or so I thought. My body has probably been storing up toxins from my late bedtimes and other unhealthy habits, so it was perhaps only a matter of time until something screamed at me to get me to pay attention.

The treatment felt good. The morning after the presidential election and its late-night results, it was easy to fall into a deep sleep once the needles were in. I asked both the assistant who did the bulk of the massage and the doctor who did some more before inserting the needles about the bruising and what it meant. They both said that someone in good health and with good energy will hardly bruise at all. People whose energy is weak or who are ill are the ones with the more purple, longer-lasting marks. The ones pictured here are much lighter than some rounds I’ve had, but they certainly followed me out of the office, and they’re still there 36 hours later. The pain is not completely gone but is dramatically milder; I don’t feel like that section of my body is ruling the rest of me as I did a few days ago.

The doctor put an herbal patch on my shoulder and told me to stretch more by pulling my arm across my body with the other arm. She could have also written a prescription for my son to resume sleeping through the night so that I don’t join him on his hard futon!