You are here: Home / Uncategorized / Just Like in the Books – Boy Gets a Bed 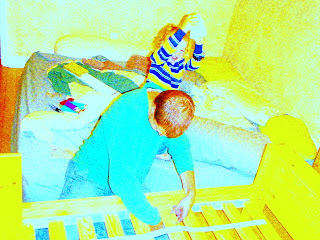 This photo is artistically rendered to obscure both my son’s face and my husband’s thinning hair. (btw, the masthead on this blog is a similarly altered-in-Picasa chunk of a photo of my son’s mouth and nose. Can you tell from the hyperpink in this bedroom rendering?)

The heartwarming scene depicted here is of a father and son putting together the little boy’s first real bed (after his parents’ and then a futon on the floor). I think it helped that a friend gave us a subscription to Babybug magazine because it featured a story about recurring character (of questionable gender) “Kim” getting a new bed for him/her and his/her stuffed bunny, “Carrots.” It’s kind of like watching a bunch of movies with scenes of the prom gets you geeked for the real thing. But can it ever really be as good? I sure hope our little dude enjoys sleeping in his bed (yes his, though I know the curls are getting long again. I like ’em) as much as Kim does in Kim’s. (Note for the development journal: Lately I’ve noticed E referring to Kim as a “he.” We’ll have to see if that sticks).

We’re currently lacking a mattress (see my post at Crunchy-Chewy Mama for more on that), so little E can’t exactly jump on his new bed yet. Or sleep on it. But he can jump gleefully on his parents’ bed with packages of some screws or something in his hand.