You are here: Home / D.C. Metro / A weekend of many possibilities

For nearly a year, I assumed I’d be out of town tonight.

I would either be at the National Women’s Studies Association national conference, hosted this year by my alma mater, the University of Cincinnati. It would have been a reunion of sorts, and I’d have had the chance to talk to people about the novel I’m writing, a book I hope eventually finds its way into women’s studies classrooms.

But the agenda of talks completely overwhelmed me and made it clear I was out of my element. Besides, none of the few friends I contacted could make it, and the one friend who still works at UC, at the women’s center, probably was going to be far too busy to spend time catching up with the likes of me.

And besides, I thought, I’m starting a healthy family website, and my health is still a huge project and focus of my time. I really ought to go instead to Atlanta for the Weston A. Price Foundation’s Wise Traditions annual conference, focusing this year on Holistic Therapies for Chronic Illness. Right up my alley!

But, like Cincinnati, Atlanta is around 9 hours away — too far to drive or spend the time on a train or bus, and too close to easily justify a $300 or $400 plane ticket.

And really, the logistics would have killed me either way. Or killed my husband. Or my marriage. Or our children.Yes, I could have learned things that might have changed my life. But I am already behind on processing and following up on things I learned last week.

And yes, I would have relished the chance to network: to talk in person with bloggers I admire, like the women behind Cheeseslave and Nourished Kitchen and Food Renegade and to chat again to the founders of Radiant Life and Chaffin Family Orchards and Wilderness Family Naturals and Pure Indian Foods ghee, and other people I met at the WAPF conference in Dallas in 2011. My father-in-law lived in the Dallas suburbs, so we worked the trip in with a visit. I don’t regret going, but I think my husband almost does. It was hard on everybody, though perhaps least on my resilient daughter who was just a year old at the time.

I thought as recently as a week ago that I might still try to get to Atlanta, but with the flight and hotel and all the planning I’d have to do for childcare coverage on Friday and on Sunday while my husband plays in an Ultimate Frisbee tournament in 40-degree weather and 20-mile-an-hour winds, the expenses in time, energy and money were just too great.

And good thing, because I had a fever as recently as Thursday night, and I have a weird and sort of painful skin thing I’m trying to kick with diligent and regular herbs and homeopathy.

And it’s good especially because I honestly had a lovely day with my kids. My son and I went to see a performance of The Lion, the Witch and the Wardrobe, which we started reading last week after some kind of Prince Caspian performance came to his school. When I was reading about an opportunity to review the play at the same moment he was looking at an Encore Stage & Studio flyer he’d gotten at school and asking to go, I knew it was time to start reading the book together and to book a date for the show. 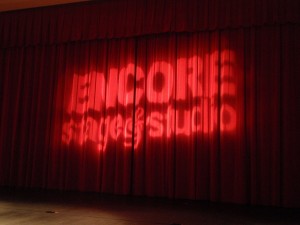 It was a delight, the performance, which I’ll write more about on Tuesday at TheDCMoms.com, and it was treat to enjoy it with him. I’m loving being the mom of a reader and a kid who can handle a bit more of the scary stuff than he could a year ago. Maybe he will finally entertain the idea of, well entertaining, of taking an acting class, which I really believe he would love. Meeting real kids who ‘ve played characters you just watched on stage can’t hurt! 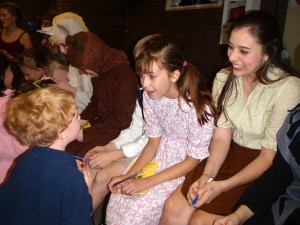 And then we had lunch at home and I took a nap with my 3-year-old, who hadn’t napped since she had a fever on Halloween. I don’t know if it’s that my husband and I stayed up too late actually watching a movie (which we’re about to finish now) or just that the purple “sexy fit” stretch cords I got at Loft are as cozy as they are cute (in a size bigger than I usually wear, it ought to be noted), but that was the loveliest nap I can recall taking in a very long time. It was so nice to wake next to my girl, who doesn’t get nearly the quality attention from her mama that her brother did at this age. But then again, he wasn’t nearly the handful she is, either.

I don’t know how we’ll spend our day tomorrow, if the wind will keep us away from the alumni bonfire of my son’s preschool, which would otherwise be a fun time to see old friends but also require that I prepare a potluck dish. Maybe we will paint the last layer on the canvas I’m trying out to see if I want to try to make a triptych, as I mentioned in a previous post. Maybe we will just go to the farmers market. Maybe I will finally send out thank you notes from my daughter’s birthday party in August.

After a busy fall of lots of activity and some travel, I’m glad to just not have a plan.

Previous Post: « Humor in Parenting (and Breastfeeding!) Blog Carnival
Next Post: Why didn’t I think of that? Grandma saves 1/72 of the day! »