I made it to my third yoga class in a row today in my self-imposed challenge to go every day for 10 days on my $10 ten-day pass at Centered Yoga.

This class — the 9:30 a.m. Anusara-inspired yoga — was what drew me to the studio. I like what I know about this style, thought that is admittedly not a lot. I get the sense that it balances a focus on alignment and on being in the pose with a heart-centered openness to joy.

Today there was only one other student, so we got lots of adjustments and personalization, but it was still about the experience and not about us as though it were a private session. If I closed my eyes, I might be in a full room. The teacher used a lot of the same language as the one who taught my previous two classes — puffing the kidneys, description of rotating and spiraling, softening the mid-back. The room was quiet, filled only with the sound of instructions, our breath and the A/C. 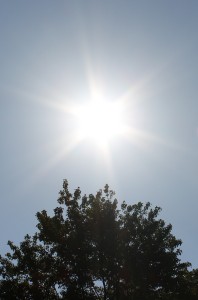 There are so many differences between doing a home practice and going to a class. Obviously, a teacher is probably going to have you do things you might not do at home. But she’s also likely to have you hold poses longer, especially if you are a wimp like me who can barely hold her 18.5-pound daughter in one arm for more than 42 seconds at a time. It’s been great to realize that even if I think my arms are going to fall off with the very first down dog of a class, I can actually keep coming back to the pose and find it restful and enjoyable over and over throughout the class.

And there’s that language I was talking about yesterday. Listening to someone put images in your head of how your body can be in space makes a big difference. I do think I was trained well at Unity Woods, an Iyengar studio I went to years ago; I know a lot more about alignment than your average gym yoga rat. But if I’m not hearing my own internal voice at home, none of those subtle, yummy adjustments get made.

And beyond hearing descriptions and watching demos, classes offer the opportunity for physical adjustments. Many times today I found length and openness thanks to the teacher’s pressure, support, or even soft touch. It’s wonderful to have help to find something that you didn’t even know was possible and maybe didn’t even understand you were trying to attain until she helped you get there.

I forgot to mention in yesterday’s post that the Sunday Hatha teacher gave me my first “Sivasana Assist.” We could opt out by putting our hands on our bellies during this final relaxation, but I am all about assistance, even if I don’t know what it is going to feel like! I was so blissed out by her pressing on a few points on my feet, I can’t even tell you what else she did. Something about pulling my legs, I think, followed by pushing on my shoulders so that they opened more. At any rate, it was a delicious ending to a great class, and I got some of that shoulder-opening today, too, along with so many helpful adjustments during the class.

It is so fun to get disciplined about this. It feels good to be a little sore and to know I’m getting stronger.

Tomorrow I would have to find a sitter to get to the 10:00 class or hope that my husband would get home by 6:00 and be ready to take on two kids if I wanted to do that 6:45, which is likely to be more full. Both are vinyasa flow, which scares me a little. I don’t know that I could keep up! Maybe toward the end of this experiment.

So the thought right now, husband willing, is that I go to the 6:307:30 a.m. Sunrise Flow class. Traffic should be light, so I could probably leave as late as 6:10 and get there on time and, going reverse commute, be home by 7:50 so that LJ can scoot out to work. It’s a little later than ideal, but it’s no later than he might get out anyway, especially after a hot three-day weekend. He even said he’d make breakfast for the boy and for him. But I tutor tonight until 10 p.m., so it might be a push to get up and hydrated and out the door around 6 a.m.! And I can’t predict how happy the baby will be about that, but her sleep has been such a crapshoot lately, I can’t work too hard to preserve something that doesn’t happen. Last week, I nearly lost my mind trying three times in one morning to get her to sleep, plus a walk, only to have her fall asleep the instant we got in the car to pick up her brother.

It is so hot here in the D.C., I wonder if the studios and gyms will fill up in the post-holiday week to come since you’d have to be insane and a glutton for breathing problems to work out in the outdoors on a day like today. A cool studio was the place to be this morning! LJ just called me from REI, where he said there must be more people than on the bike trail. (I’m at home with a baby who fell asleep in the other car on the way there, so we just came home).

One thing teachers always correct on me is my arms, which I can never get very straight or leave up for very long in poses like Warrior 1. But in my mind’s eye, I now can picture just letting them “shine” out to the corners of the room while I looked out the sunny window in the white painted brick studio.

Maybe it’s also the studio’s yellow and green sun logo that’s subliminally working on me. Or perhaps I’m thinking of the photo I put up to go with yesterday’s post.  What matters is only that I feel centered and shiny.

And looking forward to tomorrow. Even if it is going to come early.