After my first of what I hope will be ten consecutive days of yoga class, I woke today feeling like my calf muscles had wrapped themselves around my legs. Same with the triceps. It was an enjoyable, tightened sore, like I’d had someone squeeze me into Saran Wrap.

I was feeling so good yesterday after that morning’s class, I went to bed too late. So today my temper was a smidge short and my blood sugar too sensitive. I’m guessing without the yoga I would have been much grumpier, but I can’t prove it.

Even though I had to leave the house at 7:15 to tutor (which meant we’d have to have dinner ready by 5:45,which meant it had to be cooking while I was going to be gone,) the plan was that I would attend a 4:00 class billed just as Hatha yoga, but with the same teacher as the one who subbed yesterday for Gentle. Miraculously, the baby took two decent naps today, so I wasn’t feeling too guilty about leaving LJ with both kids during the day and at bedtime. 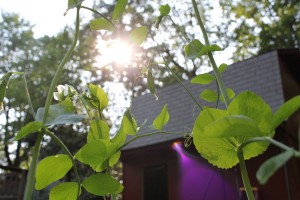 The teacher told us today, as she did yesterday, to “puff our kidneys” a lot, and today she added that we should let our “bottoms blossom,” an organic way of telling us to spread those sits bones!

I do love the poetic language of yoga, the suggestive expressions that lead you into your body in a way that everyday language does not. The kind of description a toddler might come up with if left to his own devices but a preschooler more used to the way people usually talk might be more likely to crack up at as being “silly!”

Thinking of my bottom as a flower opening into newness is something I can happily buy into. And, as my tutoring students tonight might have told me if I’m doing my job,  “bottom blossom” is alliteration! (And assonance, but they’re not studying that. Only one more night of helping prep schoolers and I can start going to bed earlier!)

I do enjoy the chatty, community Iyengar approach where the teacher in the two Fridays I’ve attended at Unity Woods and the teacher I studied under for three years a while back know everyone’s name and pay attention to their issues and needs. In fact, I got an ego boost when I was told, “Oh, Jessica, put those blocks down a level,” assurance that my asana was looking decent and I could go deeper.

But it was also nice today at Centered Yoga to just be one of a class (five of us) and know I’d be adjusted if something were glaring. And I can appreciate a little Nick Drake while blissing out on breath. Although I sing with my kids and to my kids, and my husband has more CDs and audio files than I know about, I haven’t bought any music for me in a long time and never take the time to listen to anything other than NPR or occasionally jazz or World music on WPFW or classical on WETA. Music is another type of beauty I’ve let slip through my fingers in the daily scramble to make healthy food and do all those worldly things like volunteering, signing up for nature center classes, planting flowers, writing, thinking about new kitchen counters, nursing a baby. Today’s music was yummy.

The class had me sweating, though I didn’t fare as bad as the guy who soaked his grey t-shirt. My arms will definitely feel those planks and chaturangas tomorrow. And so many down dogs! But I do already feel stronger, and it feels so cleansing to do so much breathing when it’s deep and free and intentional.

There is much joy in reaching for the sky and for windows. And much to be learned in getting to know one’s body.