You are here: Home / The Arts / Wordful Wednesday: Today I looked at my daughter 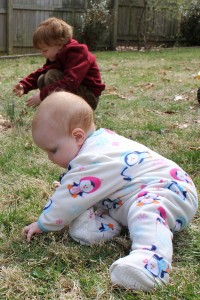 A tale of two redheads

You know that newborn hearing test you’re supposed to get when your baby is born? Mine got hers today. She’s nine months old.

Sometimes it takes me a while to get around to things.

For example, sitting in the waiting room with her there and at the chiropractor’s office was about the first time I’ve looked at her for more than 30 seconds since she was a newborn.

It seems I’m always keeping her brother from pouncing on her. Or when it’s just us girls at home, using awake time to chop vegetables to take care of my complicated healing diet or fold laundry or do some other house-related project. Or I’m reading or typing while nursing (or closing my eyes if I’m trying to get her to sleep). Or she’s on my back in the Ergo while I hang diapers out to dry or water the garden.

So it’s not as though I’m actively ignoring her, but it is a little sad that most of our eye-to-eye bonding occurs during diaper changes.

While we waited today to be called back for her test, and later when we waited for the chiropractor to see her, I got some good long looks at my girl. In addition to the straight strawberry patch she has on the pack of her head, she’s got several super-long strands of darker hair wiring up from the top (which still has cradle cap).

These long strands are goofy, but they give me reason to believe that perhaps she will not follow her brother’s footsteps into the land of Bozo and the year-long-mullet. For the record, he does have thick hair now, as do I, who was mostly bald until age two. In fact, at my super-not-fancy Hair Cuttery trim yesterday (a far cry from the stylist adventures of Dumb Mom, who writes today about being on “What Not to Wear” and the aftermath), the woman behind the scissors kept remarking on how lucky I was to have such thick hair.

So I expect Baby AJH will eventually be just fine, if a redhead, and without her brother’s or mother’s curly locks.

I just hope that her mama wakes up and starts to play with her a little more!

In addition to the extended, uninterrupted time we had today, it was a jolt to hear probably 20 different people in an hour commenting on her luscious full cheeks and her bright blue eyes. Thanks to the community and to the clock for teaching me something about appreciation!