You are here: Home / Holistic Health / Why I Feel Better

It’s been a long time since I’ve felt well, really well for more than maybe two weeks. It’s certainly been since before my second child was conceived, just about exactly six years ago.

Since her birth in August 2010, and especially since the summer of 2011, I have felt fatigued and depressed a lot of the time. It went from feeling like lead had been poured into my legs to feeling like I was walking through jello and then through water to feeling okay on a regular day but having to measure things out such that I could not exercise on the same day I needed to be with my kids all day, or take them somewhere after school, or go to a PTA or Holistic Moms meeting in the evening.

I’ve had little wiggle room with energy, mood and digestion. It has taken a lot to feel decent, and it hasn’t taken much to throw me off and turn a decent spell into another depression. It’s been tiring to chase this down, and it’s been frustrating to feel like I can’t show up for my kids or my community in the way I want, or to move forward on the career front. I have known a lot of what makes me feel better, but it hasn’t been enough.

This recent improvement has come with considerable effort, and I have been wanting to share with friends and family some of the pieces I’ve been working on.

Although each of these steps deserves its own post (and some might get their own posts eventually), I wanted to start with the short(ish) version.

The changes outlined below mostly started in January 2015. I added in a lot of nutritional supplements in March, with some challenges. I felt a little better in June but had a rough summer. The most significant improvements started in September with a new round of supplements.

Also, although we managed to have some nice times this summer, it’s also no secret that I find it stressful to have the kids with me 24-7 or to have to pay someone for help, so getting them back in school has helped! Stress of one kind or another is really at the heart of all wellness!

I have learned so much in the past few months, and I may get something here wrong. Writing is a way to process and understand. And in this case it requires going back to notes and labwork! But I’m determined to get this posted today, so here goes! Links to come. Don’t go sharing this yet, but darn it, I want to be sure I get a #NaBloPoMo15 post up on November 2 without resorting to backdating!

After having been gluten-free and dairy-free since 2004, and having been on the grain/legume/starchy-vegetable-free GAPS diet 2011-2013, early this year, after seeing The Paleo Mom speak, I began a stricter protocol:

The last two categories were the biggest for me to give up as I was eating eggs most mornings and nuts and nut butter frequently for snacks. I didn’t notice much difference at first, but I did when I first “cheated” two months in, to see how I’d react if I had some egg or nuts on a road trip. Not awful, but definitely markers of inflammation. I’ve only had egg once or twice since then. I have had some nuts and seeds on days that were rushed and I needed a source of protein, but it’s a rarity

In addition to cutting back acid-forming foods like eggs and nuts, I’ve tried to up my alkaline foods, including lots of greens. For a while I was doing well at food combining – not having starch with meat.

For a time, we thought I might have excess histamine, so I almost completely eliminated fermented foods and drinks. This seemed to help my flush-face issue and perhaps a smidge with my psoriasis. But the test came back without showing an excess of histamine. Not the smoking gun we hoped, but I’m still keeping a watch on high-histamine foods.

When we got back my methylation information, we learned that I have a CBS mutation that has probably been affecting me on multiple levels. It causes my body to not process sulfur as most people but to turn it into ammonia, which can contribute to brain fog. This also causes digestive discomfort. I’m doing much better now that I’m not eating as much high-sulfur food – hardly any garlic or onion (which I used to crave like the dickens!), have cut back some on meat, and have reduced the amount of cruciferous vegetables I eat with meat.

Removal of other offending foods

My ELISA Lymphocyte Response Assay didn’t bring up a lot of foods, but olive registered as a strong reaction, so I cut that out in December 2014. I also removed from my diet pumpkin and turkey, which showed up as causing a moderate reaction.

For a long time, I took nothing other than the occasional probiotic. I’m not of the mind that everyone should take a lot of pills all the time. No way. It used to be I would only take what a doctor muscle-tested for me. But, despite years of efforts and some improvement followed by backslides, I was still feeling so bad much of the time that, under the guidance of a friend who is an experienced health coach, I invested in some metabolic testing. It pointed clearly to some nutritional deficiencies. Food wasn’t cutting it for me as my primary vitamin and mineral source.

Since the spring, I’ve been taking 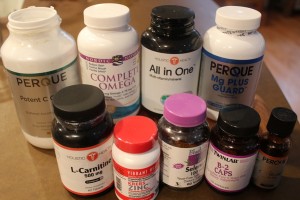 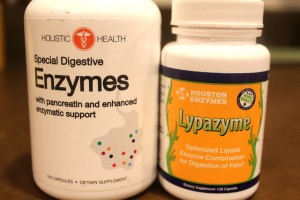 Then, this summer I got back my genetic profile and learned more about how these mutations might be a piece of the puzzle. We knew I had a vitamin B deficiency, which can impact mood and energy on many levels, but we weren’t sure the best form of B for me to take. The genetic test showed that, contrary to a more simplistic and narrow blood test I had done in 2009, I do have an MTHFR mutation, which usually points people away from folate forms of B vitamins and toward methyl forms. However, because I also have the COMT mutation, I need to be wary of methyl donors and so need B vitamins in a hydroxy form.

But even before I could fully utilize this B, I needed supplemental lithium orotate and GABA. So I am taking both of those and have now added the B12 spray as well. 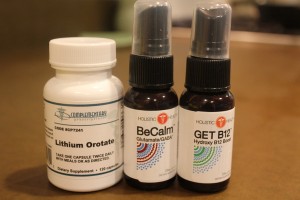 There are other issues with neurotransmitters that came up and additional mineral and vitamin insights we found through more testing. I still need to work through it all to fully understand, but I’ve recently added Phosphatidyl Serine complex and I’m supposed to add a few more supplements, including chromium picoloante, L-Lysine, Pycnogenol, more Bs and a serotonin support supplement 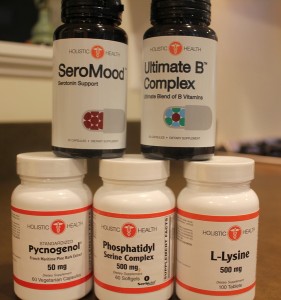 In mid-September, I got bloodwork back showing that I had reactivated Epstein-Barr Virus, meaning I have likely been walking around with Mono for a long time, I suspect since July 2011. I was thrilled by this diagnosis and a plan of action. My doctor suggested Lauricidin or Monlaurin, a coconut-based anti-viral, which I have been taking now for about 7 weeks or so.

I also showed Candida antibodies and HHV6, which might be helped by the Lauricidin. 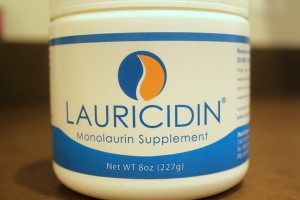 I’m also supposed to add in something for adrenal support per my cortisol tests and less than optimal but not terrible thyroid numbers and TPO/Hashimoto’s antibodies. She first suggested Ashwangandha, but that is a nightshade, so perhaps Holy Basil or Siberian Ginseng.

Finally, my Western Blot Lyme test came back inconclusive. We are talking about adding some additional herbs, and I have some research to do about different protocols, so that is TBD. But I have started taking Olive Leaf and an herb combo called NaturoMycin. 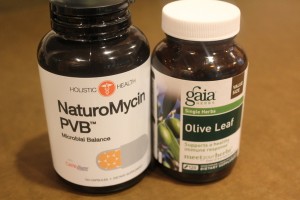 Gosh, there is a lot to write, and this was supposed to be the short version!

Coming soon: More on the other approaches I’m taking toward wellness.