You are here: Home / D.C. Metro / Taking steps toward wellness

It’s nice to end the day feeling better than you started. 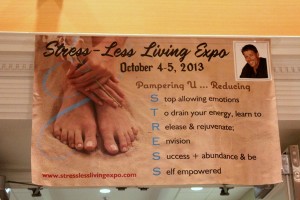 My plan was to get to the Stress-Less Expo, organized by Gainesville Holistic Health Center with the support of the Tony Robbins‘ team and Dahn Yoga, among others, to begin raising awareness and funds for the Whole-listic Children’s Foundation‘s project to create a holistic hospital for children.

It would end at 2:30, and I’d meet my son, daughter and husband at the 2:45 soccer game to be followed by heading to a friend’s for a nearby Oktoberfest from which I’d leave solo with the kids after my husband went off to band practice.

Might sound like a typical Saturday, or it might sound overwhelming. When my blood sugar is out of whack, as it’s been, I tend to worry it will be the latter. For some reason, or maybe several reasons, I am feeling much more even-keeled than I have the last several days, and the dry skin (you might call it 3-years-postpartum and counting psoriasis) on my elbows seems subdued.

It might have lying on the Amethyst BioMat from Blue Skies Wellness. Or the fact that I was breathing in Young Living Oils at the booth next door (where I’d decided I want to buy a bottle of Release oil, which the vendor didn’t have in stock.) Or maybe the doTERRA people on the other side of the room (which I never made it to!) were diffusing an oil blend that calmed me. 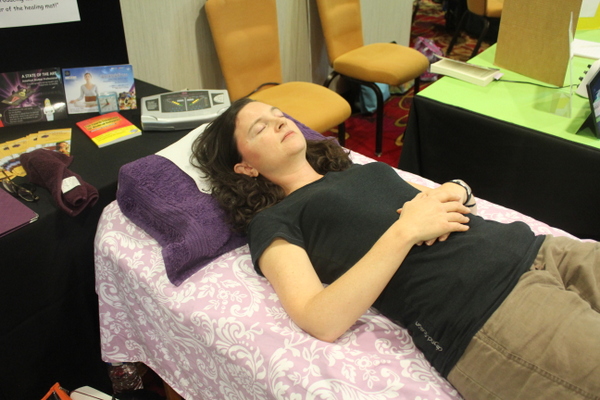 Maybe it was the few drops of lemon verbena tincture made by Maribel Rodriguez of Marble Arch Gardens that I tasted and put on my skin. I waited until after lunch (brought from home) to try the Xocai Healthy Chocolate, which was delicious, but I didn’t wait to buy a trial size of Xophoria anti-aging cream after I saw how it tightened the skin on the back of my hand. So maybe cacao is due some credit.

I’m sure I owe some of the good mojo to personal movement session I enjoyed with a Dahn Yoga instructor or to the music played during it, which I bet was working on my brain in some way as my body was.

Even though MTO Kombucha was out of jars of the delicious lime-basil flavor I got to taste, I happily bought a pint of original, and of strawberry, and of harvest spice and accepted a cup to go of the lime-basil at the end of the expo. 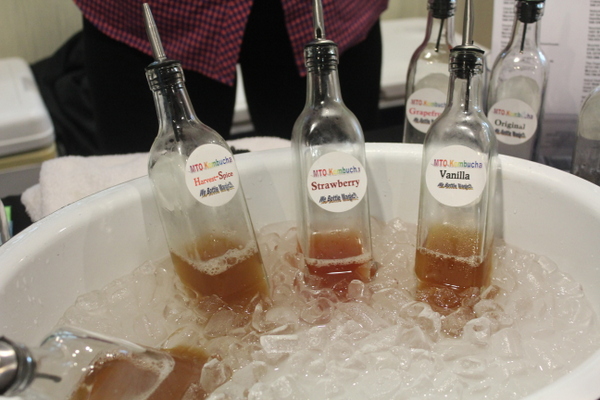 Maybe it started even before I left the house when I put in a few drops of the detoxified iodine that Celena Hadlock told me a few years ago to take and for some reason I stopped. Another practitioner muscle-tested me for it a few days ago. Maybe my body finally absorbed her energetic tweaking at the beginning of the week, or yesterday’s chiropractor visit helped. Or all these detox foot soaks I’ve been doing are taking some effect.

I do know that I started the day a little grumpy over relationship issues and the fact that I slept an extra hour. I probably needed it, but it still felt like lost time. I have been off since I spent three nights in a row out at meetings (Back-to-School night, a presentation on holistic approaches to fertility, and a Holistic Moms meeting). I then followed that week by going to the Green Festival two days in a row (the second day wearing my 3-year-old through the Metro system). I wasn’t yet feeling the effects of too many nights out, so I indulged in too many treats and then, thrown off my steady course, compulsively ate way more of the delicious and normally rather innocent Coco-roons than any one human should in one sitting. Moderation doesn’t work if it’s only in theory!

My taste buds appeased but my appetite thrown off my altered cortisol from being out at night and eating things I don’t usually eat in an unreasonable quantity, my blood sugar was nuts this week. Maybe it also had something to do with where I am in my cycle, but it was ugly. Whenever you see three different spoons soaking to loosen up nut butter, you know it’s been a scary day in my kitchen. I just have wanted to eat and eat and eat. And one productive day’s high quickly lost its elevation when someone in my life failed to share what I considered an acceptable level of enthusiasm about my accomplishments and (to be short-lived) great mood.

But today I got along with the snacks and lunch I had brought without lapsing into some kind of must-eat-now fear, and I was in a longer-lasting great mood upon arriving at the expo. I know this because I was happy and smiley to Scott, the rep from the Tony Robbins‘ crew and told him within minutes of entering the expo that I was “ready to have my head blown.” I mean, who says that? I think I was channeling my former existence as a Landmark Education devotee, knowing I was talking to someone who believes in belief creating reality.

Maybe it helped that I had just come from Office Max where I printed out some color copies of info about my new site, DC Healthy Green Families, sort of a pre-media kit letting people know what I’m doing and that I’ll be open for partnerships and such in preparation for a bigger launch in January 2013. I felt real, not like someone who might eventually blog about these vendors but probably won’t because I only have just so much time for volunteer pursuits, but rather like someone who will make it my business to blog about them, and work with them, and make sure the world knows what they have to offer health and wellness for families.

It was, then, a good time to go hear Scott speak toward the end of the event and get a shot in the arm on thoughts creating reality, and getting out of your own way, and looking to the future rather than the past, and thinking about who I am being rather than what I am doing. 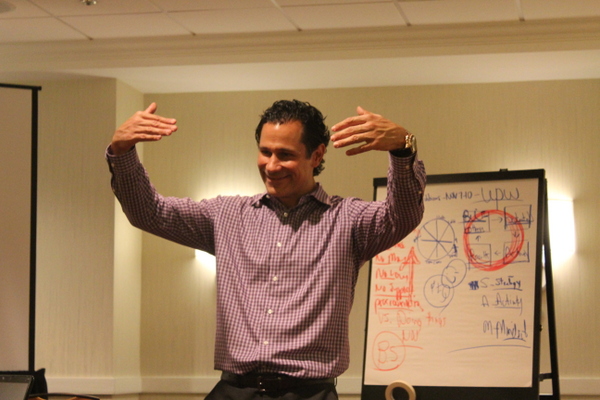 In light of my slump after just a few nights out past 9:00 p.m. — even though all that week’s events were positive and things I looked forward to — I think it’s more of a realistic caution than a limiting belief to say that I probably am not up for four days of going until midnight in an Unleash The Power Within seminar, including walking on hot coals. Scott called UPW something like Landmark on steroids, which is kind of what I figured. I found the Landmark Forum incredibly powerful but also felt literally shaken to the core; I wept, I shook, and a few months after completing the course I developed Graves’ Disease, autoimmune hyperthyroidism.

I have no regrets and am clear that my illness was the confluence of many factors and most profoundly an opportunity to learn about healing in a more profound way than any lesser troubles could have. However, I feel like all my small forays into weekend conferences and such locally are plenty enough for my system right now, not to mention enough for my family — read mostly husband — to tolerate. Now if he wanted to go, I would be all for it.

I am sure I could get a lot out of the intensive 4-day experience, but I also feel like tapping into my intuition is the most important thing for me right now. I’m grateful Scott came to speak and give us a taste of the experience, and I will listen to the CD shared. And I’m grateful for Dr. Stephane Provencher’s team for putting on the expo, about which I’ll be writing more in the future.

Previous Post: « On blogging and living (simultaneously)
Next Post: How to do only one thing at a time: a work in progress »