One week after I had my baby girl this past August, I padded groggily out of the bedroom late in the morning and found my son looking out our bay window and listening to a SteveSongs CD. With his knees tucked underneath him in the chair that sat where the birth tub had been, my son’s hair glowed orange in the summer sun. He turned to smile at us, and my heart melted. With his sister tucked in the crook of my arm, I sat down next to my little boy, age four, and sang along with him: “Everyone has their own they can sing, with their own special stories and favorite things. Something within us makes each voice unique and it sings la la la la la.”

It’s a moment I’ll always treasure, when we could honor our new reality as a family with two individual children with their own special needs, and when we could take pleasure in listening to and making music together.

Just a few weeks earlier, my hugely pregnant body had taken my son to see Steve Roslonek, the perennially red-shirted performer known to PBS Kids watchers and children’s music aficionados as SteveSongs. Thank you to the good people at Wolf Trap’s Children’s Theatre- in-the-Woods for providing tickets to me and other “mommy bloggers” at a blogger event last June and to PBS Kids for giving this normally media-shy mama Steve’s fun music video at a blogger event in 2009. 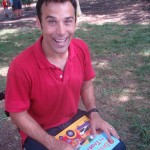 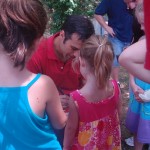 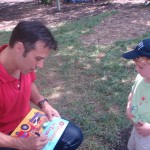 Each time we’ve seen Steve, he’s been just about the most personable guy you could imagine. The show is always funny and entertaining for children and adults alike, and he’s very generous with his time to chat and sign CDs afterward.

If you don’t already have tickets for his performance tomorrow, Saturday, February 12 at Jammin’ Java in Vienna, Virginia, the venue’s site is showing room for the 12:30 and 2:30 p.m. shows, but 10 a.m. is sold out.

According to Steve’s tour schedule, he’ll be back at Wolf  Trap July 12-16, and perhaps he’ll return this September to the National Book Festival (though with his own new baby girl who arrived last month, perhaps he’ll scale back on the travel. Congratulations, and welcome to Nadia Rose!)

Steve was kind enough to share with me some insights on his career, parenting, and all things kid. If you or your little ones have been SteveSongs fans, read on to get to know the man behind the shirt. Enjoy!

Jessica Claire: Where/how did you form your ideas about what kids respond to? I read that your first song was written for your brother (a teacher), and I’ve heard you describe on your DVD how you discovered your ideal audience walking past a preschool. But how did you go from the world of consulting to develop a sense of what would appeal to kids?

Steve: When I started writing my first kids songs I immediately felt as if I was connecting with the kid in me. I’ve always been a fairly cheerful optimistic kind of guy, one might even say child-like (while one other might even say childish).  Anyway, the process of getting back in touch with that side of me through music was exhilarating.  I still feel that today when I write a song that makes me laugh or connects with some other childhood emotion.  Shortly after I wrote and recorded the songs for my first album back in 1998, I left my corporate job, and started to visit preschools as the music and movement specialist.
It was trial by fire, and this fire was 25 hyped-up 4-year-olds. I used to play for almost 20 different classes spread across multiple schools every week.  And that is where I really learned how to manage and tap into the energy of many kids at once and to identify which kinds of songs and interactive activities were effective and which kinds weren’t.

Jessica Claire: When did you start to consider yourself a musician? To what extent were you serious about performing in high school, in college, and before you began your consulting career? To what extent did you have to brush up or to buckle down and study technique and/or theory in order to make your career switch?

Steve: I’ve always liked singing – in fact I still have some recordings of me with my parents at 2 years old that supports that statement.  I sang in school chorus from 3rd grade all the way to college.  I was quite shy in general though, and I had serious and consistent stage fright every time I stepped forward to sing a solo until college when I started to perform with a professional a capella group called the Vineyard Sound out on Martha’s Vineyard.

One night, we sang for almost 4 hours at a bar and I kept on stepping out for a solo here and there, nervous each time until I got to the point of being literally too tired to get nervous anymore. And from that day, I never had a problem stepping forward for a solo.  Looking back, it’s amazing that I stuck with it for so long.

I started playing guitar in college and, from the start I enjoyed using it to write songs.  I “taught” myself how to play guitar using tablature from some Guitar magazines and played as a hobby right up until the time that I left my corporate job to pursue music full time.  Just before I started playing guitar live for audiences, I realized that I had to practice differently, because for years, I was used to playing part of a song, making a mistake and starting over. I think that people are generally more satisfied if you instead play full songs from start to finish (especially if they paid admission to see your show).

Jessica Claire: How do you feel about children experiencing and learning about music at a young age, either through play-based exploration, in participatory classes, or through structured lessons? How have those ideas changed since you became a parent?

Steve: Kids have the capacity to be interested in so many different things, whether new or familiar.  As a teacher, and now as a parent, I feel that it’s my job to introduce kids to what I think they might find interesting and then try and ride their enthusiasm in whichever direction it happens to flow.  I believe that inspiration is king and if a child is not interested in what you’re sharing or teaching, it’s going to be an uphill battle for both of you. I used to point out to my son that different materials and surfaces made different sounds when you tapped them or banged them together. Now he’ll regularly clang the objects from the recycling bin together and say “Listen to this different sound, Daddy”.

The older I get the more aware I am of the importance of balance.  I think kids crave both structure and the freedom to explore on their own.  Play-based exploration, participatory classes and structured lessons can all have an important place in the development of the young musician.  Too much structured teaching can have the unfortunate effect of taking the fun out of the music learning experience, while play-based exploration without a set of rules, guidelines or limits (such as “no hitting anyone else with the xylophone mallet” or “no screaming into the microphone”) can create other obvious problems. Even during free play, parameters and rules help create an environment of safety and groundedness for the child.

My aim is to find a healthy, fun and instructive balance.  Some of my most popular participatory songs have elements of specific instruction and expectation (“Sing this part” or “Dance like this” as well as a free movement part “How will we get across the river?” or “Move like something that flies”).

Jessica Claire: Did you always envision yourself becoming a parent? What was it like to enter the parenthood world ten (or so?) years after you’d been creating music for kids?

Steve: I did always think of myself as a potential parent, and when we started recording kids’ songs, I remember one of the major goals for the band was to create music that we would want our kids to listen to, learn from, and enjoy someday.  And I must say that it is totally awesome to hear my son in the backseat of the car enthusiastically singing one of my songs.  Occasionally, though, we’ll be singing along together and he’ll call out “No, stop singing Daddy!”

One other interesting revelation now that we have our own child is my perspective toward audience parents.  I’ve always considered my best shows to be those where parents and kids are all involved and getting something out of the event.  I also always noticed and liked when grownups would laugh at jokes or dance along to the movements and have fun with the songs or the performance.

But it’s only now as a parent, that I feel more keenly aware of how parents react to their kids’ experience in the show, because I know firsthand the kind of joy that parents can feel when they see their child really connecting with something.  It’s a little bit of extra magic that I never had the perspective to see before.

Jessica Claire: What is it like to be a touring/performing parent? How do you and your partner balance/manage parenting roles when you’re at home, when you’re on the road solo, and when you’re all on the road together? Is there any (online or otherwise) community of performers with young kids where you all swap stories or support one another?

Steve: That’s a great idea: The Traveling Performers with Families Support Group.  It is one of the largest challenges that we have.  We travel all together quite often, but there was a stretch of shows last year where it wasn’t working out that well.  About halfway through each show, my son would make his way to the stage and yell out for me to pick him up.  It would break my heart, but it was obviously difficult for me to oblige in the middle of a concert.

But then one day at a show this past summer for our local library, he walked up to the stage area with his little guitar and stood next to me for a song.  After that song, I grabbed the microphone and asked if he wanted to tell any of his jokes.  He did and the audience reaction was very positive and since then he has joined me on stage at the end of most every show that he’s attended.

He’s only 3, so the “entertainment value” of his participation can be a little unpredictable, but usually if he decides he wants to go up on stage, he delivers – and in all seriousness, there have been a couple of events where his jokes and/or dancing have been by far the best part of the show.

Previous Post: « I’m no one with out my sling
Next Post: WAPF to release alternatives to USDA guidelines »