When my nutritionist friend suggested I try integrating some animal protein and animal fat back into my diet, I was offended. Didn’t she know how bad it was for the earth to waste all those resources on raising animals instead of vegetables and grain? Didn’t she know that a low-fat diet was healthier?

Since I was grappling with infertility, depression, cystic acne and digestive issues and she had recovered from Chronic Fatigue Syndrome and infertility to be midway through a healthy pregnancy, I decided to give her way a shot. It turns out that she knew a lot more than I did. 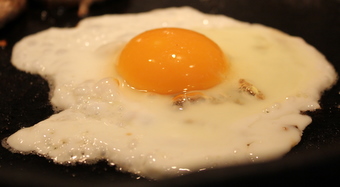 Unlike pale yellow battery eggs, pastured eggs are the color of a richly orange setting sun.

The processed soy I was consuming three or more times a day was terrible for my health, and it wasn’t good for the environment either. Once I added animal products back into my diet — slowly at first — my periods came back, my mood improved, and I felt stronger than ever before.

What followed was a move to gluten-free and dairy-free living and better mental and physical health than I’d ever known.

I’ve now had two easy pregnancies but twice found my system struggling in the postpartum year. Both times I’ve improved dramatically by cutting back or cutting out all grains, starchy vegetables and sugar, even fruit.

Like more and more people I know, I’m following the GAPS diet. Designed by Dr. Natasha Campbell-McBride with a nod to the Specific Carbohydrate Diet, GAPS stands for Gut and Psychology Syndrome. It has helped children on the autism spectrum, people with Crohn’s Disease, and so many more. I have become a believer that my body and mind were poisoned by all the gluten-full food my unknowing Celiac Disease self ate for so long and by so much processed food.

Now I keep my tummy happy by eating only Real Food I make myself. A staple is bone broth, or stock made from the bones of pasture-raised chicken and beef from sustainable farms. If animals were all eating the foods they were designed to eat — grass for cows, bugs and such for chickens — there wouldn’t be much of an environmental argument against being an omnivore. Maybe there are too many people in the world to feed them all on small family farms, but I can eat that way.

To get my fresh, vital phytonutrients, I use a juicer most mornings, using as much local and seasonal produce I can. Although I used to eat salad three times a day, until I can handle the fiber of raw foods again, juicing is the best I can do.

All my efforts come from the belief that food is medicine. There is nothing that mainstream medicine could do for me that would fix my problems if I didn’t address them at the source through nutrition. My body had 30+ years of eating the wrong food for it (and often, not good stuff for anyone), and it may take a while to repair itself, especially while breastfeeding and slowly returning to non-pregnancy hormone levels.

In November, I will hear Campbell-McBride speak about GAPS and hear other Real Food renegades bust myths at the Weston A. Price Foundation conference in Dallas, Texas. I hope everyone who cares about food for health and about the health of the planet will join me!

Why I’m not a vegetarian anymore