You are here: Home / Uncategorized / (Parental) craziness at the zoo

I witnessed some unfamiliar and disturbing behavior yesterday at the zoo.

I’m not talking about the animals.

So much whining, taunting, complaining, aggression, and general crankiness.

I’m not talking about children.

Some of the most pissy parents were out in force at the National Zoo yesterday, the most gorgeous Columbus Day ever (when arriving after 10:30 a.m. means you’re s.o.l. on a parking spot.) 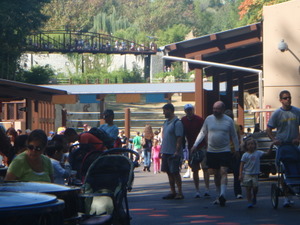 Oh, the humanity! It's no fun to witness parents stomping along like angry elephants

The place was packed, and I should also say that there were plenty of wonderful people who looked adoringly at my 10-week-old baby and her similarly red-headed older brother. But there were so darn many folks who apparently did not get the memo that a trip to the zoo is supposed to be fun and that parenting is, you, know, a joy and a privilege.

What do you do when you hear someone shout “I’m going to spank you again!” to a crying two-year-old? I just swallowed hard. How about when that woman yanked her toddler so hard I thought his arm might fall off? I sort of mumbled “Do you need some help?” to her friend while not really pausing as we crossed paths.

And oh, the bribes and threats.

“You won’t get (some awful unhealthy treat) if you do that.”

“I’ll take away your (awful unhealthy treat or crappy plastic toy) if you don’t do x, y or z.”

Comparisons to siblings. Complaints about how much time something is taking.

I am the first to say I am not perfect. I’ve had plenty of ugly parenting moments, including some doozies in public. But I’m so glad I have education and thought-through ideas to fall back on.

I learned a whole lot that has made parenting so much more rewarding and less challenging from taking classes and working with Dr. Rene Hackney of Parenting Playgroups. Rene gives lectures on a variety of parenting topics, teaches a course on Positive Discipline, and now gives advice and information via blog and live workshops. I like her so much, I’m working with her on updating her Positive Discipline workbook for the next printing!Consulting with and hearing talks by Francine Ronis, LPC have also helped with the mindfulness aspect. Waldorf education has given me lots of tools and theory behind them.

There is no one way to parent, but when having children makes you invariably angry, do something. Read a book, take a class, join a group, go online, talk to someone beside your kids. Get some help. If you’re not having any fun, chances are the kids aren’t either. And unhappy kids are not going to cure you of your malaise. Vicious cycles don’t often take detours into better territory.

Some books I have been helped by are Unconditional Parenting by Alfie Kohn, Playful Parenting by Lawrence Cohen, and How to Talk So Your Kids Will Listen (and Listen so Your Kids Will Talk) by Faber and Mazlisch. I saw Attachment Parenting founders Nicholson and Parker discuss their book Attached at the Heart in April; it looks to be a great primer on how and why attachment parenting works. The beginning of Easy to Love, Difficult to Discipline: The 7 Basic Skills for Turning Conflict into Cooperation by Becky Bailey is great for helping you figure out how you got to wherever you are (as a human, as a parent).  It’s time for me to fully read the rest of that one!

For grounding, I also want to re-read Mitten Strings for God: Reflections for Mothers in a Hurry by Katrina Kenison and have just ordered her new book, The Gift of an Ordinary Day along with another title a friend recommended: Momma Zen: Walking the Crooked Path of Motherhood by Karen Maezen Miller.

Just writing down those titles makes me feel more compassionate toward those frustrated parents and less upset at them for bumming out my blissful day at the zoo. I hope somehow they can all get some support to enjoy the important work they are doing as parents.