You are here: Home / Activism & Politics / On the bookshelf… Women and power

A few weeks ago, I went to a wonderful event with Gloria Feldt. She is one inspiring woman!

Once a teen mom, Gloria went on to raise three children and to work for 30 years for Planned Parenthood, serving as its national president until 2005. I’ve only made a dent into her book so far (it just came out last week!), but the in-person event was a fabulous way to rekindle my feminism and help me to think about my commitment to holistic health within that context. So much rides on the telling and retelling of stories. 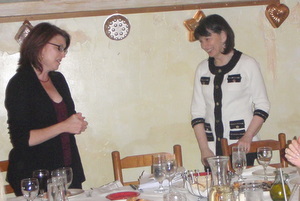 Alas, life with a young baby sometimes gets in the way of my telling stories in a timely and thorough manner. (I know: “no excuses,” right?) A few of my com-madres got their thoughts down, though, including Kim at I’m Not the Nanny and Joanne at PunditMom (who hosted the evening). Check those out posts for a preview of what’s in store tonight, Wednesday, October 13, when Gloria gives her official reading at Busboys and Poets at 5th and K NW at 5:30 p.m.

I’m sharing the press release with RSVP info in case you want to join in and/or spread the word!

My attendance will hinge on things like baby and babysitter, feeding and nursing. But if I don’t make it there in person, I will be there in spirit, will continue to enjoy her book, and will keep up with Gloria online at www.GloriaFeldt.com

From the press release:

Please join us for a reception to celebrate

Gloria Feldt
and her new book
No Excuses: 9 Ways Women Can Change How We Think About Power
Wednesday, October 13, 2010
5:30 – 7:30 p.m.
Busboys and Poets
1025 5th Street NW
Washington, DC
R.S.V.P.
unfevents@unfoundation.org
202-862-8571
Gloria Feldt is an activist and author on women’s rights, health, media, leadership. and politics. A former teen mom who became leader of the world’s largest reproductive health care provider and advocacy organization, Planned Parenthood Federation of America, she was dubbed “the voice of experience” by People Magazine. Today, she’s a powerful voice for women through her books, keynote speeches, and media commentary and rather enjoys her life as a freelance rabble rouser.
Gloria is a fellow of the International Leadership Forum. She serves on the boards of the Women’s Media Center and the Jewish Women’s Archive and the advisory board of Our Bodies, Ourselves. Vanity Fair magazine named Gloria one of America’s “top 200 women legends, leaders, and trailblazers”. Glamour magazine honored her as Woman of the Year. She was one of Women’s e-News’ 2007 “21 Leaders for the 21st Century”.
No Excuses: 9 Ways Women Can Change How We Think About Power
In No Excuses, feminist icon Gloria Feldt argues that the most confounding problem facing women today isn’t that doors aren’t open, but that not enough women are walking through them. From the boardroom to the bedroom, public office to personal relationships, she asserts that nobody is keeping women from parity – except themselves. Through interviews, historical perspective, and anecdotes, No Excuses examines why barriers to gender equality still exist in American society, and discusses how to break them down through organized efforts using “movement-building” principles. Feldt employs a no-nonsense, tough-love point of view to expose the internal and external roadblocks holding women back, but she doesn’t place blame; rather, she provides inspiration, hope, and courage – as well as concrete “power tools” to aid women in securing equality and justice for themselves – articulated with personal warmth and humor. In an era where women outnumber men in universities, reproductive technologies have changed the power balance in personal relationships, and women are closer than any previous time in history to earning on par with their male counterparts, No Excuses is a timely and invaluable book that intends to help women equalize gender power in politics, work, and love.