You are here: Home / D.C. Metro / No expiration date on learning or growing

Today I led a meditation at a health & wellness fair at my children’s school!

This happened because last year, after I attended the first National Kids Yoga Conference, I suggested to the principal that mindfulness activities at school be considered, in general and in particular using the wetlands learning lab we built three years ago. When planning the school’s inaugural health & wellness fair this fall, the principal recalled this interest of mine and asked me if I’d like to lead a meditation activity.

When the principal first asked if I’d do the meditation, I replied yes but asked if it was okay to invite an outside leader. It’s been over a year since the amazing first National Kids Yoga Conference last September, and I’m very much still processing what I learned. It’s not like I’m the best example of mindfulness.

Then I thought about it some more and talked with my colleague and friend, and I thought, this is my community and a space I helped to build. And it’s an approach I value deeply. Why shouldn’t I do it? I ought to believe that my interest and passion and moderate level of experience are enough, even if I haven’t gone on to establish a successful daily meditation practice for myself or my kids just yet.

We are working on it. We are all always works in progress. This is true of us as individuals and of the earth.

The native plants in the wetlands were planted – by many hands in a collective effort – in October 2012. The whole area had to be protected until the end of that school year so the fledgling plants could get properly established. For the entire 2012-13 school year, the area didn’t look very impressive. No one could use the “Wetlands Learning Lab” we’d been talking for so long about funding and building. The following year people were still intimidated, partly as a leftover from the cautions to leave the space alone and partly because it had taken off such that it was lush with foliage and no one knew what to do with it all.

Now it’s just a part of our landscape. People who don’t know the history may not understand how dramatically different it is now that the area has returned to the ecosystem it always wanted to be after years of being a soggy, ugly mess. In fact, they might see it as overgrown and unkempt. But it’s working. It is doing its job. And it is happy. 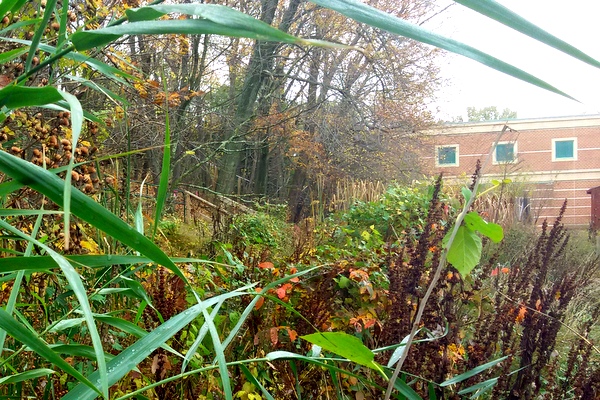 I am not done evolving either. My definition of success is its own work in progress.

About an hour before the meditation session was supposed to start, I realized it was indeed raining in earnest. My outdoor-focused sensory awareness plan was not going to pan out. I asked my kids to help me find some books instead. I put on my Om necklace that opens for an insert with essential oil. I used lavender and decided to bring the bottle with me. Halfway to school, I realized I ought to have picked some lavender at home to scent the room and for an activity. But I was trying to already practice the inner calm I was going to be talking up in my session and to believe it would all work out. On my way into the school, I picked mint.

My daughter was excited to help putting out dots on the ground. People actually came! It was a crowd very diverse in ages as well as backgrounds (and, I imagine, expectations). I opened letting everyone smell the lavender oil.I discussed needing to “practice” calm just like you practice with a sport or a musical instrument. We talked about how to calm before bed. I modeled and led belly breathing. On my son’s suggestion, I read Grandfather Twilight and had everyone breathe deeply at the end of each page. Then I lead a guided meditation through the body, encouraging people to relax each part and let it feel heavy. At least two girls said their bodies felt relaxed when it was done. 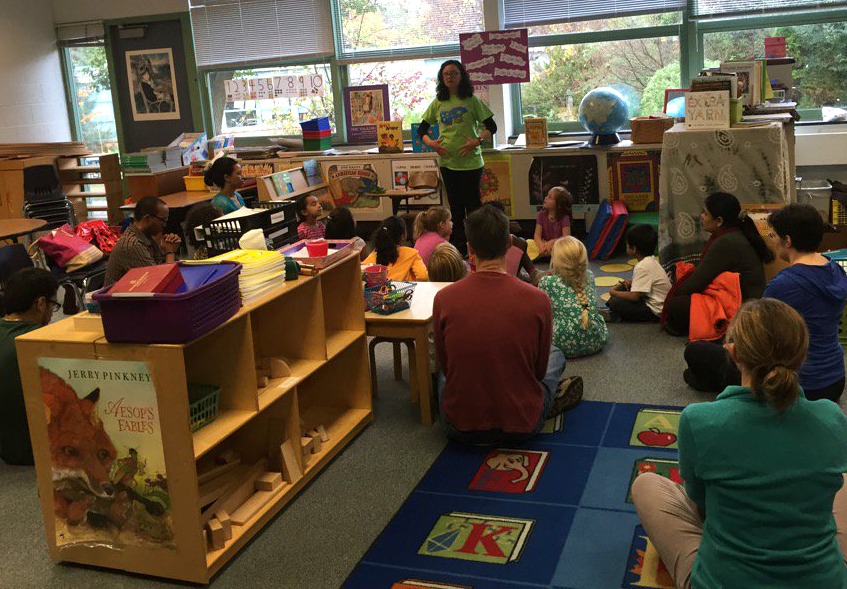 I closed the 30-minute session by reading the upbeat and brightly colored The Peace Book by Todd Parr. I was almost done when the principal came on the P.A. to tell us what was next. The last few pages were a little rushed, and I tried to keep a calm vibe as I quickly handed out the mint. Even though the parents were ready to get back to the soup that had cooled down after the food demo that had preceded my session, several of the children were excited to get the mint. It wasn’t the most intentional part of the session, but it was sensory and it at least made a nod to the natural world.

My daughter helped me clean up like a champ. It was a cheery time, just the two of us. But soon after, she had a total breakdown in the zumba class, which clearly was way beyond her abilities. It was hard to hear her cry that she didn’t want to watch but see that she also was refusing to get off my lap and begin walking out of the room. She was so torn. It was too hard. She didn’t want to ditch it. She wanted to be happy but felt out of her league.

I got it. I was present. I told her however she was feeling was okay. It was okay to feel frustrated. I said I was sorry it was hard for her, but I never made her wrong or got mad at her for saying one thing and doing decidedly another.

Rather than walk through the school, I had us exit to the outdoors at the first opportunity, hoping that getting into the natural world would help, even though it was raining. We walked past the wetlands. We walked past the trailer that houses her classroom. I wanted her to get her head out of her pain and to recall normal life where she is happy and successful. 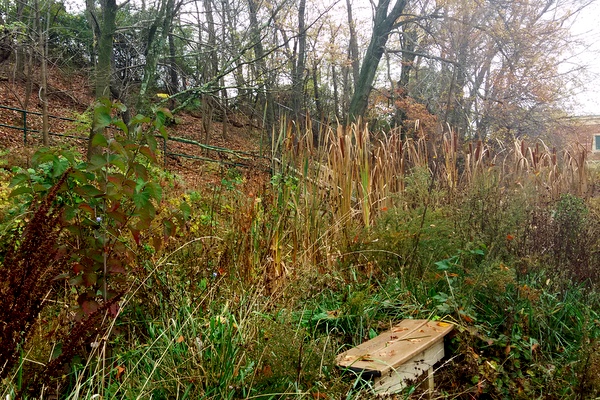 For the others who attended, my hope is that some little piece of the meditation stuck with someone. Maybe as the children go to bed tonight, they will think about their parents’ urging to pray a little differently because of the dad in class who offered that as a suggestion. Maybe they will ask for a lullaby or a story in a new way after hearing their friends mention those strategies for calming before sleep. Maybe they will breathe into their bellies. Maybe they will run through their body letting each part calm.

I will be glad if any of it comes back to them anytime in the coming days or weeks or months or even years.

It would appear that the message of the morning was lost on my daughter, but then again, all the calm – and seeing her mom modeling it – might have just thrown her for a loop. Sometimes when we access something good and new, all the yuck and frustration that has been pent up comes out sideways.

I had a five-year-old puddle on my hands only 15 minutes after the meditation session ended, and then later tonight I was shouted at tonight and called mean. The road is not smooth and without potholes. It’s all about how you respond when you trip. I made it through without ugliness because, in leading the session, I had accessed love and calm. I sometimes have trouble living it, so it was pretty powerful to see what happened to me when I taught it.

So I will be glad – I am glad – for what I got out of leading the session.

I’m grateful for the chance to practice what I preach, and to practice by way of preaching. 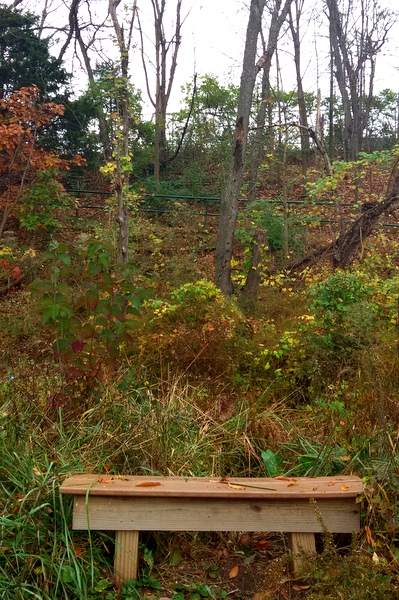 The National Kids Yoga Conference returns next weekend, November 13-15, 2015 again at GWU in DC. Even though I know it will be a little tough on my family for me to be gone all day Saturday and part of Sunday (to say nothing of Friday night, which is still TBD since we have a school event), I know in time they will benefit from the wisdom I gain and the practice I will get on practicing.