You are here: Home / Uncategorized / I sewed! It’s a miracle!

While cleaning out a closet in the midst of the current series of snowstorms, I came across some felted wool that I cut out to make a little person as my last project in last year’s Waldorf school Parent-Child class. Now, I might have made my son a Halloween costume, but I’m not one of those crafty mamas in general, and I was downright pathetic by Waldorf school standards. I was in near tears trying to learn to knit, and the stitches on the mouse, snail and gnome I made in class are not exactly going to win any awards.

But there is part of me that really wants to model for my son making things with one’s hands.

(Besides food, that is. Today when I was saying that his dad was better at some things and I was better at others, and E said of my top skills, “Like chopping vegetables?”)

And there are so many 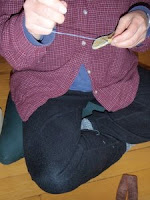 times when he asks to do something we’ve been saying we were going to do for a long time and I just never get to it. (Including the fact that in all these days at home, I still haven’t made homemade ketchup or mustard as planned).

So, since Daddy was on a conference call and it was way too windy and cold to go out today until after 4 when it finally stopped snowing, I said okay. I used all the thread I had on the pants and quadrupled some regular thread for the rest. The doll is not going to be a prototype for a new Etsy business or anything, but my boy enjoyed making the little guy walk and play, and he said multiple times, “I love him,” though the little fellow still ended up face-down on the floor later. Old habits die hard. 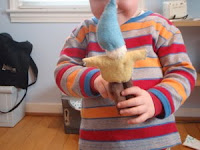 It struck me how much easier it was for my son to amuse himself and to be patient while I created this real thing than it is for him to deal with me working on the computer. Shouldn’t be a surprise, but it was still worth remarking.

I do hope this snow shut-in comes to an end next week, but I’m also worried that, in all my trying to clean out and purge and not get further behind on work-related stuff, that I won’t have amassed enough moments like this one when this period is finally over.

Not exactly living in the moment. Maybe racking up some points? And does it make up for the fact that I never got dressed today?