This post originally appeared on DC Metro Moms on December 18, 2009

I am a jealous friend 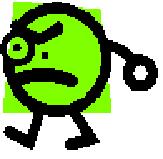 Hey there, Misery. I’ve got some company you haven’t met yet. They’re called my friends. May I introduce you to each other so that you feel so lonely? And so I don’t?

Lately I’ve been really making use of my green eyes and wringing my hands every time one of my buddies exudes joy just for the sake of joy or faces a challenge with an admirably brave and peaceful face. Will someone else please tell me they are having a hard time with something?

This is not the “no one understands me, I’m so dark” angst of my adolescence. I really am mostly grown up, and I’m no longer clinically depressed. I just like to know that I’m not the only one who is human. Or disappointed. Or jealous.

It’s not that I want bad things to happen to people I love. Of course not. I just have a very short tolerance for perfection, or, more accurately, for a disease I call “Failure to Complain.”

I’ve been realizing lately that some of my friends are just remarkably well-adjusted. One recently had a great second birth, not even knowing she was in transition. All I could think about is my unwanted c-section (three and a half years ago) and how I don’t know if I’ll ever be able to get out of my own way enough to have ever a vaginal birth (should I even have another successful pregnancy someday).

I’m glad things are going great for her so far, but when she throws me a bone in the form of, “Check back with me next week when I’m solo the first time,” I lap at the possibility of future fluster. I have only one kid. People with two are not allowed to be better at everything than I am, including (especially?) parenting.

Another friend chirped, “I’m in a good place!” after starting a part-time job. It’s a good balance for her, she says. I would not know balance if it hit me on the head, even though I’m actually organizing a presentation on the topic for a moms group next week. (Let’s hope that after that, this ‘tude will be a distant memory!)

I didn’t even seriously want the part-time job I interviewed for a few months ago, and I can’t imagine how terribly I’d be floundering as a mother if I’d gotten it. But I’m still jealous that my friend has one and is making it work. Even more than that; she’s seriously happy and not questioning herself. By contrast, the cartoon version of me has a perpetual question mark in the fuzzy cloud above her head.

Did I mention that this newly employed friend has two kids, too? She got her period back from her second child before I’d even gotten mine back from my first (who is the exact same age as her first). Oh, and she just remodeled her kitchen, which is gorgeous. Never mind the fact that my kitchen and my house are bigger. I want hers.

Apparently, I have caught the disease my son has called “Being Three and a Half.” Symptoms include: impatience, whining, and wanting whatever someone else has.

I’m about to stomp my feet and have a fit of my own the next time someone tells me her kids sleep until 9 in the morning or that they are going to Camp Grandparents in the next town overnight.

I’m trying to do too much these days and am not knowing where to stop; as a result of my inner turmoil, my heart is not opening up with a warm glow for everyone who has their act together (or who can happily accept whatever is at this moment). Why can’t they be jealous like me? Where are my Bah Humbug soul sisters?

Don’t get me wrong; I don’t like being around people who say nasty things to their kids – or about their kids – or who talk about things “sucking” all the time. I wince when I hear another parent use the word “hate.” When I’ve got my game face on at the playground and other people are chiding kids for things that are perfectly normal, I’m the one who keeps up the smile and says something to diffuse the situation or to deflect the parent’s criticism.

But when I’m talking to a friend one-on-one and I can’t match their zest for life at that moment, I appreciate a serious dishing of dirt.

It’s just a little hard to throw shit on sunshine.