You are here: Home / Holistic Health / A week home sick 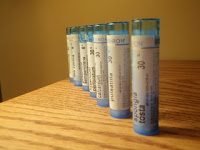 I’m still climbing out from the mounds of things that piled up this past week when my son missed all three days of preschool. Monday I thought was just a precaution, that going would tire him out. The cough wasn’t that bad.

But apparently it was too much to take him to the Vitamin Shoppe for a homeopathic remedy, to a crowded post office where we left without sending a package because the line was ridiculous and the self-print label machine was broken, and then to Trader Joe’s to get some onions so I could make soup. That night he came down with a fever, and it was lethargy city around here on Tuesday. The rest of the week was just coughing and whining, but enough that we couldn’t do anything or be around anyone.

on my back and for the remedies, which I think helped while not fighting his body’s natural work.

He was better enough today to shove

l snow (his idea!). Let’s hope that wasn’t too much and that we’re all in decent enough health to get to family for the holidays.

For more on holistic health, see “Let the Fever Go” on my Washington Times Communities column, “Reading Ingredients: Tales from a Health-Conscious Mom.”