You are here: Home / Holistic Health / Healing the c-section scar

I knew when I went in for my c-section in 2006 that the effects would be lasting, but I only recently realized to what extent. I tend to hold on to emotion through my body, and since the need for a surgical delivery was profoundly disappointing to me, I expected that it would take my body and heart a while to get over the method of my son’s entry into the world.

Last spring, before I conceived, my doctor’s muscle-testing and her colleague’s computer scan of my energy meridians showed my body sort of “divided” at the midline. After that, I began using a laser after acupuncture treatments at their office to help the scar heal. Before bed, I would massage sesame oil into my scar at night to help it loosen. I also felt called to use the essential oil SARA from Young Living Oils, a blend that markets itself as being for sexual trauma.  After I got pregnant on the first try, I essentially gave up thinking about my scar and turned my energy toward worrying about whether or not I could manage to have a successful natural birth.

Now I’m 12 weeks postpartum after a homebirth VBAC, or HBAC. So you’d think I’d have gotten over the c-section, but apparently not! I noticed that my first attempts to jog around eight weeks after my daughter’s birth — just a mile and a half or two! and slowly! — had me later feeling like my pelvis was aching. This was not the case with my son. With him, I didn’t try any exercise — or much of anything else — until ten weeks and then went out for four miles and felt great.

I figured the discomfort was product of the different method of birth and also the fact that, instead of staying home, napping, and healing like I did in 2006, this time I’m running around with a preschooler, volunteering for his school, running a mom’s group, and trying to have something like a freelance writing and editing career. Not much time for rest, and so many things I want to do!

I mentioned all this to Dr. Jennifer Mercier, who was selling her new book Women’s Optimal Pelvic Health with Mercier Therapy just behind our Holistic Moms table at the Freedom for Family Wellness Summit last weekend. She offered to work on me. 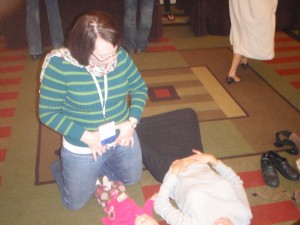 It hadn’t occurred to me that any of my discomfort was related to my c-section scar. I thought it had to do with my pelvis spreading internally. The word that came to mind after I ran or spent a lot of time on my feet was “crushed.” That sounds dramatic, but I felt like my pelvis had been sort of crushed in a car accident years ago and that what I felt was the residual dull ache.

But then she started palpating my scar. It hurt. It was hot, like a muscle with a lot of tension. She noted that my scar was very close to my pubic bone. She worked on it for a few minutes, rubbing it like you would a knot you’re trying to knead out. Then she had me do some resistance exercises. I was on my back with my knees bent, and I tried to pull them together while she tried to push them apart, three times for 10 seconds.

After she was done, she pressed on the scar again and asked how I felt. It didn’t hurt. “If you’re seriously putting the same amount of pressure as you were before, then that is am amazing difference,” I told her. She said she was. And she showed me how to work on my scar myself, by applying pressure and then pulling up and down off the pubic bone.

The next day, we took a long family walk, and I jogged a little bit of it. Zero ache the next day. Seriously. I was pretty impressed.

Dr. Mercier told me she developed her method through the study of osteopathy. I happened to have an appointment a few days later with my osteopath, Dr. D. I told her about my experience a few days earlier. Dr. D. was pulled into my pelvis and told me to put my hands on my scar and imagine pulling up, just energetically, but the same motion Dr. Mercier had recommended.

Through my work with Dr. D, I felt some major releases, and, at one point, like my whole body went light — illuminated — from my scar down and from my scar up — like a bright light moving in both directions from my middle. It was pretty intense, and pretty amazing. I left feeling much less emotional and testy and much more in a place of acceptance than when I walked in (even though I didn’t think any of my crabby mood had anything to do with my surgery four and a half years ago).

I have started reading Dr. Mercier’s book and am going to recommend it to anyone I know who is (or knows someone who is) dealing with infertility or cycle issues.

Previous Post: « Walking the talk (to slow down)
Next Post: Author to read on miscarriage, stillbirth, and beyond »