From lots of yoga to none and back again! This week I’m taking part in the Anusara Grand Circle and Wanderlust Vermont. I’ll be reporting on the events for my Washington Times Communities column but at least wanted to post some personal reflections here before my head gets any more exploded!

These are groovy people. They really want you to be happy with yourself. I knew that Anusara yoga was about opening the heart, but I am learning that it does that by helping you believe that everything is good in its essential core and that you are whole and beautiful just as you are. “No one can make the kind of artistry you can,” said Anusara founder John Friend in his Monday morning class.

Just hearing this kind of feel-good message – especially from such a lovely voice, and later repeated by other teachers – can be transformative on its own if you’re in a place where you’re ready to hear it. But here, in the beautiful mountains of Vermont, on a crisp clear day just before the summer solstice, the words came at me while I was breathing deeply and moving intentionally in a yoga practice. It’s a powerful thing, this combination of worthiness talk while my body’s nervous system is getting calmed down and every cell is getting a jacked up dose of oxygen.

Today, I was a little intimidated to do a full backbend or wheel pose since it’s not something I practice regularly. I do know that bridge pose often leaves me feeling like my body has just been washed in warm sunlight, the kind that calms but doesn’t burn. In fact, it was the hope of changing my sour mood and getting myself back to sleep that caused me to do a bridge pose the day before my daughter was due. Instead, my water broke and she was born 4.5 hours later.

But wheel requires more upper body strength, something I’ve never had much of. So it was a huge surprise and such a delight to find myself today actually giddy after we’d done it a third time. The first two times, I just rested on the top of my head, but the third, I found I could rise up, and it felt delicious. I started laughing when I came down. Clearly, I was not alone in my reaction; John friend said knowingly, “Backbends can make anything better.” 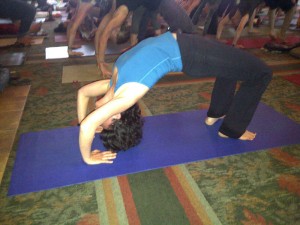 My backbend two days later, more tired and a little less able to reach for the sky. Don't you just want to take a strap and pull up my hips and nudge my shoulder blades so that I can lift my heart up and forward?

The class with John wasn’t especially hard; it was longer than a regular class but shared a lot in common with the great classes I took at Centered Yoga during my 10-day/10-class yoga challenge earlier this month. I felt very well prepared. But with extra assistants in the room in the large morning class and later in the alignment and fundamentals class with Deb Neubauer, I got some helpful assists and adjustments. Maybe it was the extra dose of talk from John on the message of “No, really. You seriously are fine the way you are. Nothing needs to be fixed. You just need to come into alignment to realize the full expression of yourself.”

Or maybe I was just ready to believe that I am not broken because I left my house a complete mess, spent hours packing for this trip and still forgot things and slept less than I needed to the night before we left (two hours later than I’d hoped).  Maybe I inherently do believe that it’s okay that I pursue all the things I do. Maybe I’ve invented the belief that I should feel guilty just because my husband doesn’t greet each new project I undertake with pom poms on the sidelines or because other women seem to be perfectly content to full-on homeschool and to do handwork all the time.

I love the idea of being an artist, something that was said today many times. I love the idea of dropping self-criticisms or questions. I mean, isn’t it more enjoyable to be around someone who relishes her life and makes no apologies than someone who constantly is saying she’s sorry about not replying to emails or lamenting the fact that she didn’t get around to something she wanted to do with her kids?

Methinks this is exactly what my friend Patricia recently talked about in her workshop. If you are intentional (a big word in Anusara) and live according to your priorities rather than just stumbling along or going through the motions – whether that’s in sun salutation or parenting – just how fulfilled can you be?

So I’m inspired! And yet, I’m writing this at 10:40 p.m. with a baby on my back because she would not go to sleep and stay asleep any other way. There are realities in our lives beyond our control, but if I remember that parenting is part of a chosen path that brings me so much joy and wisdom, perhaps I can drop the grumbling about lost free time.

Yoga gathering celebrates “magic” on the solstice: Report from day one of Anusara Grand Circle

Yogi goes to Vermont, the second post I wrote about the event for this blog but the first post I actually got up. This post, the first I wrote back on Monday, was held captive on the laptop that couldn’t connect to ethernet, and we had no flash drive and no opportunity to get to wireless for two days, so I’m actually posting this Wednesday night and back-dating the time stamp to when I wrote it. Did I mention I’m sitting the parking lot of a hotel siphoning off their public wifi while my daughter sleeps in her carseat. Here’s hoping my son stopped crying when I left instead of having a fit that his grandmother was going to put him to bed. I do feel guilty enough that  probably won’t stay as long as my battery would let me, just in case he’s refusing to sleep.