You are here: Home / The Arts / Advent Garden: focusing on beauty

When I walked into the Advent Garden room holding my son’s hand, I felt a rush of senses. The smell of fresh evergreens instantly transported me into a magical wintertime. I felt the profound calm of the darkened room, lit only by one candle in the middle of the spiral of greens and a few candles in the corner lighting the music for the woman playing the lyre. This was the definition of reverence.

Would you believe that 12 young children, aged three and four, walked silently into the room for this preschool Advent Garden? No questions, no shouts of “yay!” or “wow!” They were just there in the moment, taking it all in. This is why I’ve chosen Waldorf education for my son.

I admit that I haven’t read much about Waldorf beyond You Are Your Child’s First Teacher and Beyond the Rainbow Bridge (and a handful of articles), but I’ve learned a lot through attending last year’s parent-child class and through parent meetings with teachers. I love that Waldorf invites children to appreciate simplicity and that it just holds them there.

As a former English teacher, I used to ask my students to think a lot – about what we read, about what they saw, and, perhaps above all – about their own thinking. The latter was primary when I taught Introduction to Women’s Studies to college students. It’s not that I don’t believe those skills or processes to be valuable anymore. I just don’t think they are appropriate for little minds.

Our children will have a lifetime to answer questions and ask questions they seriously want to know the answers to. Right now, when my son is not even four and is experiencing so many things for the first time, I want him to just be there in the moment. And he doesn’t need to know why things work the way they do. I’d rather he make something up, or make a guess.

I talk a lot, and it’s a challenge for me not to engage in an intellectual way when my highly verbal son poses questions with such curiosity. But if I answer him, where does the curiosity go? What good will it do him to learn something by my telling him instead of him figuring it out on his own?

Walking into the Advent Garden, I felt a profound sense of connection to the natural world and the spiritual world. I grew up with a lot of TV and no religion, and I was moved to tears just by entering this magical room. It was a thing of beauty to watch each student’s face reflect the glow of his or her apple candle as it was lit from the central candle. The room gradually grew brighter as more and more candles appeared around the spiral of greens.

My friend, a Hindu woman raised in the U.S. by Indian parents, had the same visceral reaction, being moved to tears by the Advent Garden. When I was in graduate school, I did a lot of writing and discussing, and I criticized the word “universal,” positing that every aspect of “reality” was socially constructed. Now, when I witness or participate in Waldorf rituals, I have a profound sense of connectedness to all living beings. Without a word.

The loudest sound was a three-year-old whispering in anticipation of such a special moment. Everything else was communicated with hands, held or with simple gestures inviting the children on their individual walks.

This is not to say that loud music and flashing lights or exclamations of excitement are bad or wrong. It’s just to say that it’s amazing what kind of beauty can rest in place when none of those things are expected.

And when sheer wonder is allowed to hang in the air, quiet as the gently plucked strings of a lyre. 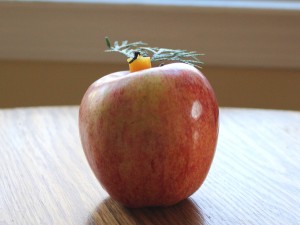 The above first appeared in my column at the Here is the post I wrote after last year’s Advent Garden at my column on the Washington Times Communities in 2009.

This year’s 2010 Advent Garden at my son’s Waldorf school was no less magical than last year’s. This time I wasn’t pregnant, though, so I was slightly less emotional on one hand and more so on the other because it was the first time I’d left my baby with a childcare provider.  I’m glad I did so that my son could have me all to himself, and so that I could focus on the beauty of the string music and the gently brightening room as each child lit an apple candle and placed it on a golden star.

I had hoped to spend the baby-free  morning before Advent Garden just reading at a bookstore, but instead I forgot my snack and my son’s afterschool snack (which he’d need while I nursed the baby at the sitter’s), so I bought some bars at the Vitamin Shoppe.  That was next to the AT&T store, where I decided to ask for help to set up email on my new Blackberry. The woman who helped me trade in the Android a few weeks ago helped me again and finally figured out that she hadn’t completed the exchange, so AT&T thought I still had the Samsung. So I spent all my baby-free time (on the clock, so not free!) in the store. At one point I got out the new issue of Mothering and read the article on taming anger, trying to put in practice each sentence.

But once I got into that beautiful place and held my little boy on my lap, the outside world faded away. I knew my daughter was in good hands (and was full, because I’d gone over to the sitter’s when she texted that the baby woke up and took a little but not much milk). I knew the  clerk didn’t mean to screw up my exchange. I knew my son would probably enjoy the bars as much as the snack I’d made (or more).

So I succumbed to the stillness and brought the candle light into my heart.