You are here: Home / Uncategorized / A sailor’s life’s not for me

The first time I remember being on a boat, I had broken arm and couldn’t waterski. It was the summer between fourth and fifth grade, between ten years in a rural area outside of Ann Arbor, Michigan where hardly anyone I knew had a boat and the next eight years in an affluent suburb where it seemed like everyone learned how to waterski before they could walk.

Boating was foreign to me but a way of life for many of the friends I was to make after I moved. If it didn’t seem like such an obvious pun, I’d call myself a fish out of water. It wasn’t enough to be around people for whom designer labels were de rigeur, but there was all sorts of lake lingo to learn.

The first trade show I ever attended was a boat show, probably when I was in sixth grade. It had never occurred to me that such spacious and house-like boats existed, much less that I would be friends with people who might consider buying them. I went home bleary-eyed to my land-lubber, gardener parents with mini buoy keychains and other plastic  marketing freebies, items that had seemed so attractive hours earlier and then so ridiculous out of context in my one-story house on the corner.

Now that I’m  parent, I think about the things we do regularly as a family compared to the things we do only occasionally — or that I say I want to do but haven’t managed to since my son was born five years ago. Like camping. Or canoeing. What will my son see as part of how we live? What will seem foreign to him? What will he think of when he thinks of vacation? 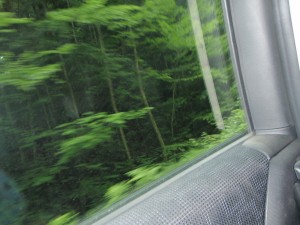 Photo my son took from the car as we tried to find a waterfall on vacation in Vermont. By the time we got there, his sister had fallen asleep in the car, so he and his dad took a quick trip to the falls while I lamented not having service for my BlackBerry. And the fact that they hadn't taken the camera.Priceless!

The vacation we just took had my brother- and sister-in-law and me racing around, playing tag-team parents with my husband and his mom, all so we could do a bunch of yoga that our collective four kids never saw.

So what was the vacation to him? A lot of time with his cousins, which is great. But not exactly the same as what it was for me! I can see how boating as a family endeavor can be a uniting experience. 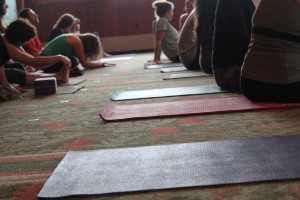 The view my child didn't see on our vacation.

The author of The Unexpected Circumnavigation: Unusual Boat, Unusual People Part I chose to take on her around-the-world trip before having children. And just the other day on Facebook, a high school friend whose family had a boat posted a photo of hers along with a note about a girls night out. She has a baby just a few months older than mine and an older child, too. So clearly the boat is not just a family affair!

As my children get older, I’m realizing that my brand of reality may be very unmatched to theirs if much of what I spend my leisure time on is outside their vision. So thinking about the priorities I want them to see in action — like a connection to nature — I’m hoping to get us out again to Polyface Farm or to the farm that delivers our eggs and milk every week.

And maybe on the weeks when there’s no day camp, maybe we can make our own yoga camp for a half-hour in the mornings. 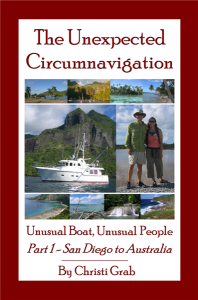 As a member of From Left to Write book club, I received a copy of this book for review. All opinions are my own. You can read other members’ posts inspired by The Unexpected Circumnavigation: Unusual Boat, Unusual People Part I on book club day, June 28 at From Left to Write.