You are here: Home / Uncategorized / You may rest now. You may not pinch Mommy. 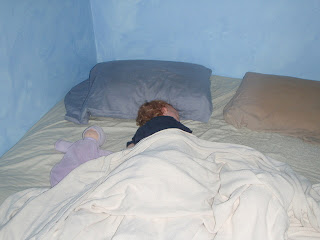 Isn’t he sweet? Napping in his new bed, or rather, his old double futon that takes up half of his new room? If only this shot represented reality more than cover model head shots.

We are not napping. The kid is so wound up, you would think someone else in his family teaching him that it’s not important to get good rest. Oh. Well, I’m sure my reluctantly going to bed after 1:00 a.m. has nothing to do with it. He’s gotta be his own man, ya know?

Apparently being his own man means hitting, biting and poking his mother if she tries to lie down with him. “I want to go downstairs!” he whines. Last week there were no naps even after nursing in bed, and he’s napped in the car plenty of times without having nursed, so I decided we weren’t going to do any more nurse-to-sleep (except for a little extra shut-eye in the morning).

As I kept pouring applesauce into his bowl yesterday afternoon so I could check my email, it occurred to me that I’m losing 10-15 hours a week of solo quiet time. Is it any wonder I haven’t posted anything in over a week? For at least an hour in the afternoon, I’m either in his room trying to be restful and quiet, or listening to him play on the monitor while I’m downstairs quickly eating the lunch I stupidly didn’t eat while he was eating because I thought he was so tired he’d just eat a little and then go down quickly. Or I’m putting away laundry or doing something else I could do while he was awake and happy (and I’m not modeling rest if I do that).

So Mouthy Mama is fantasizing about farming out the nap. I needed to look into new Tuesday childcare and am ready to send him somewhere for the day if he’ll have a place and opportunity to be restful more restful than he is with me. I don’t think he’ll try to wound another adult. And I’m already thinking about the extended day at his Waldorf school for next year when he’s in the three-day morning program. It’s certainly a lot calmer there than it is here! They even give kids lavender oil!

I’m hoping this is just an adjustment to the new room and to his being around his half-birthday, whichtends to throw kids into disequilibrium, according to Your Two-Year-Old: Tender or Terrible by Louise Bates Ames. We’ve had no-nap jags before, but I haven’t been as committed to offering consistency as I’m trying to be now. But I really want to bail.