You are here: Home / Activism & Politics / When Round Two is with Baby #1

this post originally appeared on February 19, 2009 on DC Metro Moms

When Round Two is with Baby #1 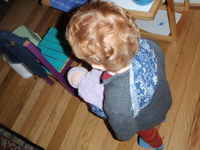 Haven’t I been here before? Nursing all day long on the couch, my arm falling asleep as I try to hold a book underneath a head and sleeping body. My breasts aching for a break. My metabolism mixed-up from all the food-producing while my hips ache from sheer sitting. Scrambling for a snack so I can get back to start all over again. I seem to recall this as my primary existence something like a little less than three years ago. No, I have not had a second child. We just had a fever.

Well, I didn’t actually have a temperature, but I would call it some kind of repeat-newborn-dayz fever. When he was a little tyke, my son spiked a few high and quick ones and hasn’t had much of an illness to speak of in a long time, until now. This time, it was rough for over a week.

As one of those attachment parenting-types, I always figured I’d be a long-time breastfeeder. When my period didn’t return in time to space kids three years apart, I decided to enjoy my baby-free days, nurse my son through one more cold and flu season and through his third birthday (late March, about six weeks from now), and then reassess my future feeding and fertility options.

So here I am, 10 days after my (previously) 30-pound and highly conversational toddler decided to quiet down and slim down by way of heating up.

Scary worry for my son aside, on my end, this rhythm has been quite the deja-vu, especially when he had those glassy fever eyes and just stared into space like a baby with no focus. It was all about the nursing and sleeping, the nursing instead of sleeping.

But as he started to regain his toddler consciousness and remember how much control he had recently started to want to have over his life, the conversations got weird, jolting me out of baby-memory-reverie. You know all those things you kind of think to yourself your newborn is thinking — “Why won’t can’t you do it right NOW?” and “Please hold me!” — but you try to tell yourself, oh, he’s just a baby, and of course he’s going to cry? Well, this time, folks, the kid actually says those things. We’ve gone from one or two nursings a day and only a few late-morning hours of family bed back to midnight requests — but this time in grown-up words — of “Can I nurse?” and 2 a.m. whinings, “Why? Why can’t I nurse!?” There have also been multiple choruses of “MOM-mee,” said like the vaguely irritated “ehhh” of a baby. But now these are followed up by a specific request that melts your heart, like “Can you hold me?” or a non sequitur that recalls college dry-mouth days, as in “I want some of the blue juice that we got at Harris Teeter” whispered into my ear in the middle of the night.

Do I really think I could do this again, with an inarticulate newborn? I’ve written before about my fantasies of having a second child — getting to have a do-over. All this time I’ve been hoping I would get the opportunity — to have a VBAC, to put into practice the lessons I learned from raising my son, to give him the experience of having a sibling. He’s so great with his dolls, but they seem content to be worn and nursed by him, whereas I’m pretty sure a sibling would not. I’m still generally thinking in the direction of trying again before 2010, but I’m also newly confident of the fact that my body needs a break between sustaining lives. It took a lot to get my health to the point where I could even conceive and then stay healthy through and after pregnancy — not fall into depression, not experience a thyroid imbalance recurrence. A week on the couch with my son (and with the book Ghost in the House: Motherhood, Raising Children and Struggling with Depression) has me feeling like I need a week on a professional’s couch, not to mention a ton of yoga, several mounds of food, and a hot bath.

As far as my son wanting to nurse and be close to his mama (read: grope me all night and day), we seem to have rewound to the beginning of the tape. The cassette is just chugging in the machine, threatening to snap. I fear that we couldn’t have gotten through a week of fever and cough and a double ear infection drug-free if we weren’t nursing — not without a lot more weight loss off my small boy or other ill effects. And I’m happy to keep it up until he’s fully back on his feet, physically, emotionally, pottily, and to age three. I would just really like him to get back to not being so needy before I decide I really need to cut him off.