You are here: Home / Holistic Health / When needs diverge 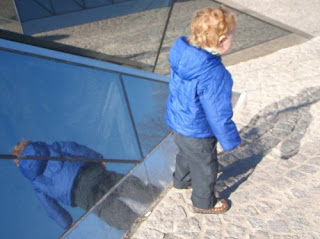 I am being pulled in opposing directions. Now, my wanting to do several things at once is not a new thing, I freely admit. However, I was starting to feel good about the idea of going to bed early in order to get up early and do yoga or work out and write before my son got up for the day. If I get up at 5:00, I figured, (something I did regularly while teaching high school), I can do 20 minutes of yoga practice at home and then write until he comes downstairs with his dad at 7:00. We’ll get him used to sleeping or at least resting until 6:30, and then he can play quietly in his room or in the hallway while LJ showers and gets dressed. Or, on alternate days, I will write for just a short bit and then go to the gym to return at 7:15, when LJ has started breakfast but is about to be needing to leave for work.

Either way, I thought, I will feel refreshed from an early bedtime, exercise, centering and creative expression. Surely this will make me more than ready to face a day of focusing on my son when we’re together — being fully present with him. And on the days I do have some childcare, I’ll be more on-task for having gotten some ideas down on paper already. I’ll either be able to move ahead on that or work on work or leadership for the moms group I’m starting.

That sounds lovely, but I’m feeling like it just ain’t gonna happen, not without a few rough days of habit change. Why? Because my son is no longer sleeping soundly through the night on his own or in his own room. He paddles into our bed sometimes as early as midnight. Sometimes he just snuggles in, but other times he tries asking to nurse first. I tell him it’s sleepy time, not morning yet, and he usually complies, especially if I have some almond/coconut milk ready for him to drink. But when he wakes at 4:00 and I say no to nursing, he sometimes gets pissed. He whines, telling me “No!” and wriggling his hand back up or down my shirt. This also happens on occasion when I cut him off from the allowed post-5:00 feeding(s). I essentially feel like I’m done with my night’s sleep at 4:00, and that is just too early even if I were getting to bed by 9:00. In fact, on New Year’s Eve, I stayed reading on the couch when my husband took him up to bed, and for some reason that image would not let the boy rest without his mama. So we all went to bed together early that night. And 4:00 still felt just plain wrong.

Yet I never fell back under solidly, and he wanted access to the bar at 5:00 and 6:00, and then he was just up and wanting us all to be up for the day. That is now becoming the norm: he whines, “I’m hungry! I want to go downstairs!” He used to be willing to go play in his room for a bit, maybe bring in a doll or some books to us, but now the suggestion that he amuse himself just upsets him more.

I don’t know what we’re going to do. Since my husband will probably not start his new job this week, I think I’m going to say we bite the bullet and I just leave the upstairs at 5:00 and let them deal with it. I’ve planted seeds of suggestion about this to the boy, which he ignores to ask some unrelated question that seems to be a cue he doesn’t want to hear about whatever I’m saying. I am not in a hurry to wean for good before age three, but we may have to morning-wean or bed-wean. I don’t know if he’s just coming on like gangbusters now in a last-ditch effort to claim the goods before he drops them or what. We had been down to just morning and night until just after Thanksgiving (also just after I ovulated for only the fourth time since he was born); then he was asking around the clock for a few weeks. Since that period ended, he’s tapered back to morning and night, sometimes before nap and only asking otherwise if he gets hurt or is just feeling needy. I ought to read more of How Weaning Happens and Mothering Your Nursing Toddler. My friend’s 13-month-old just stopped on his own — was crying when she’d try to feed him. I just can’t imagine my boy ever wanting to stop. I wonder if there’s something I’m contributing to that dynamic — some need to be needed?

I would like to wean and cleanse before the summer, before considering trying for another child if that’s what we decide to do. If we do go for #2, I would want my body to have some recovery time and to get to the healthiest possible state, which it clearly is not right now. Seeing as it took 29 months to get my first postpartum period, I want to be gentle with myself.

One other thought about the boy is to get serious about restarting remedies. Tonight I gave him Bach Flower Essences Impatiens and Vervain in addition to our first time trying Rescue Sleep — and I could get him back to the craniosacral therapist and get us both into one of our healers who helped before. I also read in Peggy O’Mara’s “A Quiet Place: Your Child’s First Healer” in the new (Jan/Feb 2009) issue of Mothering magazine that the homeopathic remedy Nux Vomica is a go-to helper if you’re waking at 3 or 4 a.m. If I don’t find that I have any in my medicine chest, I think I will pick some up tomorrow and give it a try. And I will also call my pediatrician (a homeopath) to finally get in for an appointment!