You are here: Home / Uncategorized / What other people tell you about your children

“She’s amazing,” my daughter’s daycare provider said, not a gushing punctuated by an exclamation point but a simple, heartfelt declaration.

I wasn’t looking for praise. Mostly I was relieved that little AJ must have had a good day, her first day of full-day childcare. I mean, how could someone call her amazing if she’d, oh, you, know, thrown fits about the proper (impossible) way to put on clothes, disgustedly pushed food away, and screamed “Mine!” and “No” as though she were a 45 record with only those two sides?

She must have been more fun than that.

“I want to keep her,” added this woman, a beloved public school teacher who, just a month ago retired to escape the drudgery of standardized tests and turn her home into a Montessori daycare and preschool.

In that moment, I realized I had been worried that this woman would not appreciate my little firecracker. After all, we come from a Waldorf education background and really don’t know the score of this philosophy where play is “work.” Orderly my home is not. Crisp is the last word you’d use for any of our clothes. 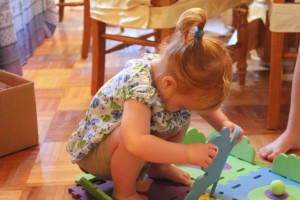 But my daughter, even though she makes a mess of my house with her madness, clearly has method to it. She seems innately drawn to putting things in place. If only her mother knew how.

“She’s so purposeful,” said her teacher. I both smiled and died a little inside. Yes, this is what I have seen for months and why I decided to take the philosophical leap from the land of fantasy and imagination to this place. She will thrive here, I thought. It sounds like she will. 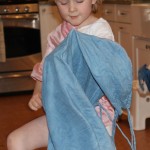 than we did with her ethereal-realmed older brother. He and I did parent-child class, and then he went to three-day and five-day preschool (or “kindergarten”) at a Waldorf school, delightedly telling me the magical stories he had heard and concocted as we drove home each day. He is at home in silks and abstraction, in silliness and in dreams.

But I needed childcare with AJ in a way I didn’t with her brother, so I had to do something. The Waldorf-trained home daycare was my first choice, and she was great watching both kids for a day this summer. But she was full, and across town. That makes for a short day picking up my daughter before getting my son from the bus at 3. Or a longer day for the first-grader who has to wait an extra half-hour before getting home to snack, relax and, eventually, do homework.

So, although my husband found the Montessori teacher a little cool (meeting her sans kids) and the early literacy philosophy against his natural grain, we went with it. I convinced him that there was more overlap than not, and that the beautiful environment of the Montessori space and the yard and garden attached to the home far surpassed any other daycares I visited. No worry about TV or artificially colored snacks here! Plus, you can’t beat a six-minute commute and a teacher and woman who is well known and respected by a lot of people I know and respect.

It surprised me how much I was moved when the teacher told me my daughter was amazing. We think she’s somethin’ else, and there’s no one who is going to overlook either of our gregarious kids as wallflowers, but I got a kick out of the fact that someone else got a kick out of my daughter.

I know this amazingness to be true, and I also know that it’s different with me and with my husband. “This is the perfect time for her to have started,” said the teacher.

I had hoped as much. And it felt good to know that someone else thought I was right.

And that my daughter was pretty special.

Previous Post: « Ten things I love — and don’t — about summer
Next Post: Confessions of a mostly natural parent »