You are here: Home / D.C. Metro / What makes me feel like a parent

The first time I’d heard of a “touch truck” event was in a With the Kids article in the Washington Post Weekend section. Herndon Truck Days sounded like a blast! And the article also inspired me a year later to pitch an article about the Alexandria Symphony Orchestra’s Children’s Music Festival. It was published and the ASO event sold out!

Here we are, now three years later. My son is in kindergarten, so the weekday Herndon event is out. When I saw — I think on SuperNovaMommy.com — that there would be a touch truck day on Saturday, May 19, at Arlington Central library, I added it to my growing list of potential activities for the weekend.

When we got to the touch truck event, the library wasn’t even open yet but parking was already insane. I felt like I must be the last parent in all of Arlington to pull up. The lines for the crane, dump truck, cement mixer, fire engine and more were in the tens and maybe even 20s deep. Still, it was a nice morning, and who can’t get a kick out of seeing big trucks up close and personal? 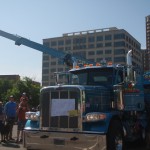 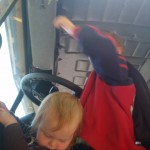 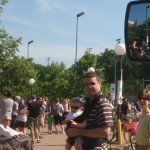 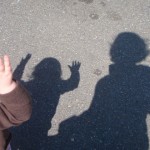 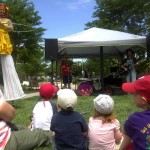 I was solo parenting while my husband worked at home, dealing with one of a thousand things on our to-do list for the house renovation and selling project. (All we seem to do these days is tag-team parent!) The baby — now 21-month-old toddler– stayed happily on my back in the Ergo until her brother climbed in his first vehicle. Then she wanted “Dowww!” and to take the wheel. This was fun for a while. She stuck close while we stood in line. We played with our shadows. 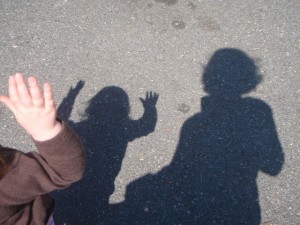 While awaiting a spin in the Recycling truck, I let my pale little beauty wander in the shade of trees near the library building. But then, I turned my back for a second and she disappeared behind a big green mechanical shed-thingie, one of those weird metal outcroppings. As if my heart weren’t already jumping from enough from the loud horns! (Honestly, can’t they turn down the volume on those for special children’s events? Someone write the manufacturer!)

I found her fast enough, though, and I admit that it was fun to run into some friends of my son’s, the same ones we’d seen the previous weekend at the enjoyable Arlington Children’s Chorus concert. It was cute to see brother and sister “driving” together. It was also heartening to see so many more mamas wearing their kids in Ergos and mei tais and Moby wraps than I did when my son was little. Not only is it easier to wield a baby on your body than in a stroller at an event like this, but I think little ones would probably feel more secure among all those sounds if they are close to a loving body.

And it was nice to be out where the people were after so many sheltered months stressing about home construction and my health and my son’s health. I felt like I was part of a much wider community for the first time in a long while.

However, I have to admit that I had more fun the next day, at the much less well-attended “Live it Up” event at the Clarendon Market Common. My son had a blast in the moon bounce and getting a free glitter tattoo. We all playing with hula hoops and watching the woman on stilts walk and hula with grace. My son wasn’t up for trying out the obstacle course set up by Washington Sports Club, but it was fun to watch. The best part, though, was the performance by Rocknoceros. I’ve heard great things about that band for years, but this was the first time I caught their show. Call me a fan! Those cats were funny, their music catchy. 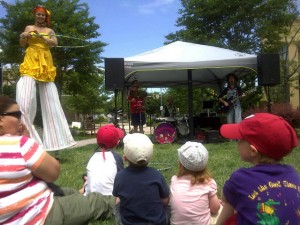 As I sat with my baby girl clapping on my lap, and then later watching her get up and do the funniest sideways toddler boogie, I felt like I did last weekend at the Arlington Children’s Chorus concert. “This is what I thought mothering would be like: sharing things with my kid,s where they are exposed to some kind of beauty that we can all enjoy together.” In a spring dominated by house renovation plans and health struggles, these two events were oases of joy. We were just together, enjoying something beautiful and one another’s company. Last weekend, this came as a lovely mother’s day gift.

The Market Common event was out in the open at very casual, a great day on the lawn (until my little redheads started getting pinker than the lemonade that Red Mango was selling). The Arlington Chorus event was likewise family-friendly. It was surprising how well both kids sat and listened, but when they wanted to climb the stairs at intermission or run around in the lobby, or blurt out “Ba ba ba!” during the middle of a song, they were in good company, and no one looked twice.

So I was a little sad that we didn’t also make it to the ASO event on Sunday afternoon. Last year, I wrote about the event again for the Alexandria Patch and got a press pass to attend which I did with both my son, then age 5, and my daughter, then 9 months old.

My son, more sensitive in some ways than he was at age two, was overwhelmed with the loudness of the instrument petting zoo but enjoyed the art activities in the cafeteria of T.C. Williams High School, the school where I used to teach (before they opened the fancy new building). Whenever we pass by the building, he recalls the event and seeing a friend of his we don’t see often, whose mom and I took Bradley birth class together.

When I’d queried my son about what he wanted to do most over the weekend, he did pick the ASO festival over a few other options, but when it came down to it, after a morning outside with Rocknoceros and his sister napping quietly upstairs, he really just wanted to stay home with his dad and watch sports on TV. I can’t blame him. We can only process so much at one time. Just look at me for an example of how multitasking will frazzle your brain. And your hair.

While I may not approve of a lot of TV time, watching sports is a bonding activity for my son and his dad. It also gives him a little currency to trade in the arena of mainstream activities, which is a lot for a kid whose parents hardly even let him pee inside a McDonald’s, much less eat there, and who don’t partake of a lot of other activities that many folks associate with fun and childhood (like ice cream trucks, movies, character-driven toys).

So, a little couch time can be a good thing. While I love that the DC area affords us endless possibilities for activities, I also have to remember to budget into our schedule something that will never make it onto an online calendar of weekend options but is nonetheless important: Hanging out.