After a summer of moving and letting the light box run for way too long so I could make food or unpack something or wait on hold on my cellphone trying to get our phone and internet connected, I was really hoping to cut the cord to the TV once school started. For crying out loud, the kid is at a Waldorf school where media is strongly discouraged, the idea being that it as stifles rather than inspires kids’ imaginations. I was not looking forward to being outed by my son singing “Bob the Builder!” in the school sandbox when he’s supposed to be decorating mud pies with leaves.

But more importantly, I just like him better when he’s not been a couch potato. And I think he likes himself better, too. If he’s going to be gone 8:30-3:00 for three days in a row, can’t I fill the rest of the time with wholesome activities?

Indeed, I could, and I did. After a calming afternoon in the small aftercare program, my little boy has mostly been a dream in the afternoon. At first I planned things for the afternoon to keep us away from the living room. Now I know it will go okay, and I don’t fear lacking the willpower to keep the TV off. I’ve usually had a good bit of productivity and can wait until he’s in bed to do anything besides cook (which I often start before he gets home anyway).

Some days, when I’m behind on dinner or it’s raining and we decide to bake, we just hang out in the kitchen. He finds all sorts of stuff to play with on his own and enjoys helping me for real, too.

Other days we do an errand or go meet a friend or just walk down to the park. As long as I get food on the table by 5:30 (not always easier, but I’m improving), my son generally stays happy doing whatever and is asleep by 7:15. So I’m trying to just be present most of those four hours together.

As for the mornings, he wanted to watch TV before breakfast the first few days of the school routine, but I managed to weasel out of that, and now it just doesn’t come up. We also had the luck — and the misfortune — to lose a library DVD. When we returned that last yellow “Bob,” we fessed up to the missing “Cuentos Y Mas” bilingual librarian program and were told, “It’s a max $10 fine if you return it and $20 if you lose it. Why don’t you just keep looking?” We have, to no avail, but now I have my reason for not getting any more library DVDs. And if he remembered a week or two that we actually turned on the television and watched PBS, he’s since forgotten that was an option.

I am not a purist, though. The TV is still in the house, and it has football on over the weekends. And last week, I really needed to edit a piece of writing, so he watched an episode of “Martha Speaks” on the computer, on my lap. Keep the connection, I thought. Don’t let him zone out of the human world. A few days later we put on Yoga Kids (an old favorite) so that I could get a practice in. He did a few poses but mostly watched me and the screen from the couch. And the other day, when I had a slew of emails to read, he watched part of a that dry British “Kipper” that a friend had lent to us. 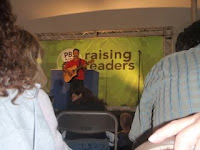 moderation does exist. I’m thrilled we made it a full month with no kid programming (outside of seeing Steve Songs at the National Book Festival, which is live and fun, and the guy is super nice. I was introduced to him at this event at PBS Kids). I really think my boy is a more grounded kid without the media. We still have our episodes of whining, but they are all about irrational things that seem life-shattering to a three-year-old, like there being no more grapefruit. That’s just how it is for him at this stage, I think; life has to feel like it sucks one minute and is peachy the next.

The rollercoaster of emotions is annoying, but I can handle that better than I can tolerate whining about watching more of something when the boy ought to be experiencing real life.